Marina Ross: Everything was Forever

On view through Friday, January 14th

Baby Blue is honored to announce the first solo exhibition by Marina Ross, Everything was Forever. The show features a series of sequential oil paintings with sourced imagery from The Wizard of Oz. Grieving the loss of her two-year old son Rafi, the artist studies the impact of trauma on identity through the protagonistic lens of the iconic character Dorothy Gale, played by Judy Garland. The paintings dissolve the boundaries of the film stills to reconfigure the memory and identity of Dorothy. Using digital projection of the source material, Marina transforms the original technicolor film stills through a painterly approach, to heighten the sense of color and touch. Serial paintings of a singular image command the audience to interrogate and contemplate the image of Garland’s performance.

This series expands on the artist’s larger painterly investigations of iconic American performers such as Marilyn Monroe, Brittany Murphy, and Britney Spears. The subjects represent both fantasy and tragedy, as their legacies are inseparable from the systems of power which contributed to their rise and fall. This has aided Marina’s reconsideration of her own childhood, in which the culture and collapse of her native-USSR permeated her sense of identity. There were numerous paradoxes and contradictions between fantasy and reality during the fall of the Soviet Union and Russian citizens could not envision an alternative to a failing utopia. Marina’s childhood was formed in the wake of its unexpected but clear collapse. Her painting practice is an ideological critique of contemporary America’s own foundational contradictions between fantasy and reality, from the perspective of a Russian immigrant.

The work responds to oil painting’s history in its distinct palate and sensitive approach. Pastel colors and exuberant brushwork echo the Rococo painter Fragonard, while the atmospheric blurring references contemporary painter Luc Tuymans’ investigation of cultural memory and trauma. Historical references to the medium are also supported by the rise of social media, the heightened presentation of self-identity, and the significance of the ‘selfie’. Ideas of the self, the construction and presentation of identity, and the malleability of this construction operate between the space of the photograph and its transformation into the hand-made image.

Statement From The Artist
Performance is part of this process of grief—trying to regain control after an event that dissolves your understanding of what is real. How do you go back into the world after trauma? In loss, reality presses against the impossible like shifting tectonic plates, creating chaos. As truth becomes opaque, you recognize that nothing is real so you are free to be your own version of yourself. I’ve needed to create a new persona—a version of myself as a person who can move on. Performance is about accommodating other people—my audience. My grief triggers discomfort in the people around me and I search for the script and costume to put them at ease. I am on a stage and everyone is looking to me for the answer to an impossible question. The role I perform cannot offer an answer, but models an approach to loss where I maintain a sense of freedom.

Bio
Marina Ross (she/her) is an artist living and working in Chicago. She was born in the former Soviet Union (present-day Moldova) and moved to Chicago as a child. She earned her Bachelor of Fine Arts in Painting from the University of Illinois at Urbana-Champaign in 2012 and her Master of Fine Arts in Painting and Ceramics from the University of Iowa in 2018. In 2017, she received the Stanley Award for International Travel to live and work at the Saint Petersburg Artist Residency in Saint Petersburg, Russia. Her work has been shown at The Franklin, Heaven Gallery, and Baby Blue Gallery in Chicago and in New York at Cheryl Hazan Gallery, The BogArt, and Brooklyn Fire Proof. 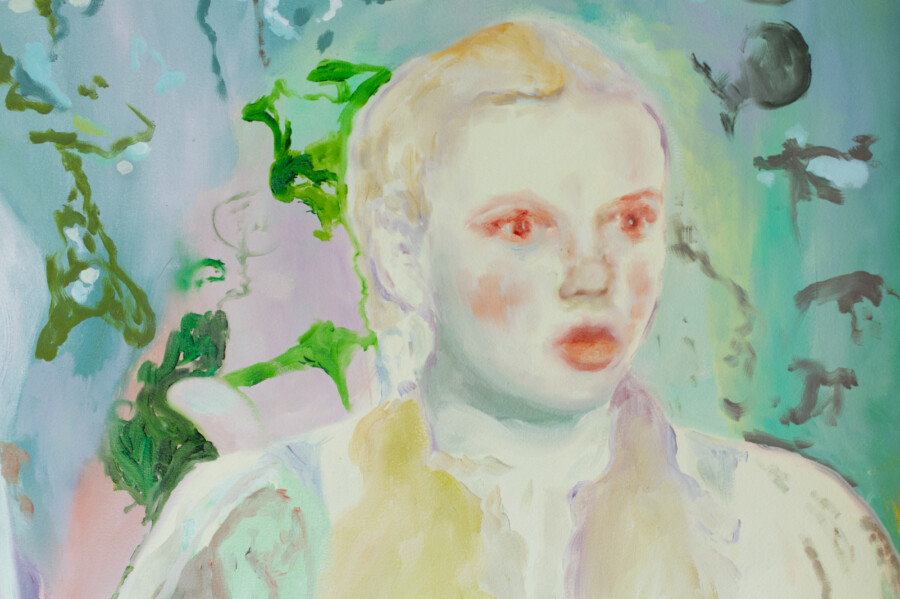