During the shortest day of the year the Italian Cultural Institute of Chicago celebrates the International Short Film Day in collaboration with the Italian Short Film Center.

A selection of six Italian contemporary shorts of different genres, all of them acclaimed by International Audience, will be available online from December 21 at 1pm CT.

The credentials to watch the short films online will be sent to registered users via email on December 21 at 1pm CT.

In a small provincial village in the north, Nina, a shy and insecure young gymnast secretly adores Gio, another popular and casual girl from the village. When Gio realizes Nina’s awe towards her, he decides to make her an adept, in an ambiguous and abusive game, disorienting Nina, who, subjugated, finds herself at the mercy of Gio’s manipulations and whims, which will lead her to a point of no return, from which he will never be able to free himself, not even by changing his life and city.

The Most Beautiful Widow in the City

Ettore, the owner of a funeral home in a small town, lives his days without particular stimuli, until Marilena, the only woman he has truly loved, shows up at the agency. She has lost her husband, an old friend of Ettore. After so many deaths, this is the first that Ettore touches and that will make him reflect on life.

A man goes to work and sees a boat for sale. He dreams of leaving his life behind. He leaves, and the dream gives way to memory, the mistral forces him to a makeshift landing. A woman, another story, a new beginning? As in an Escher drawing, everything starts again where it seemed to have ended.

Gaia lives with her adoptive grandmother in a rural house. She has a special relationship with a white lily plant she grew in her grandmother’s land. Cristina is the daughter of a very powerful entrepreneur. She is different from all little girls. Her skin, diaphanous because she is albino, creates a wall of distance with the surrounding reality. When her father, an unscrupulous man, wants the land of Gaia’s grandmother, Cristina rebels. A story of a pure and simple friendship, Mami Wata takes its name from an African divinity, a symbol of water and the duality of nature: pure and uncontaminated, rebellious and free.

In the municipal swimming pool every evening a woman swims in total solitude. With each stroke, thoughts melt, flow away and the torment subsides. But many times not even water is able to erase the deepest obsessions.

I Wanted to Be Gassman

1962. Aldo Marianecci, a 40 year old actor seeking his big break, returns to his hometown, Cisterna di Latina. He will spend the weekend with his lifetime buddies and with a young American woman met on a movie set in Rome. His days will go by waiting for a call that might finally change his life. 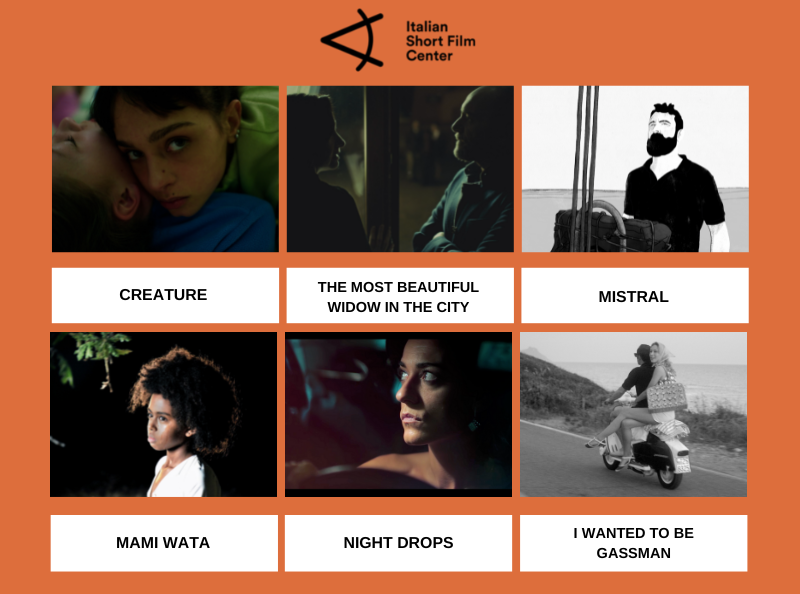