On view through Sunday, January 15th

On view until January 15th

The starting point of this exhibition comes from photographs of broken pieces of glass found on the streets of the Chicago Loop after a series of BLM protests during 2020. Those images became an archive of a visceral experience I witnessed during that period as a new migrant in the country.

Through a mashup of operations those photographic archives have been filtered and scaled up into large foil printed pieces. They blow up the hidden while working as supportive skins that carry encrypted intentions and messages. They look to question our relationship to how we experience and understand what we are seeing; our depth of feeling.

Using materials that reflect light such as emergency blankets and iridescent foil, the work is activated by the physical properties embedded in this composition: Reflection, Light and Movement. Along with this, the original material connotation calls to mind urgency and the need for shelter and protection. But, on the other hand, it also triggers the idea of a wrapping paper gift and an “eye-candy” scenario for people to interact with.

The materiality of the work is the image itself and the interaction within contouring and intervening the gallery space by generating an immersive and physical experience of being absorbed or even expelled by it.
_____

Maria Burundarena was born in 1989 in Paris, France and grew up in Buenos Aires, Argentina. Maria is an artist and educator who has worked as a photographer and textile and fashion designer, printing different narratives in diverse objects and environments such as garments, sculptures, installations and led screens. Maria’s work is currently focused on site-specific installations using light projection, large printed images and reflective materials. 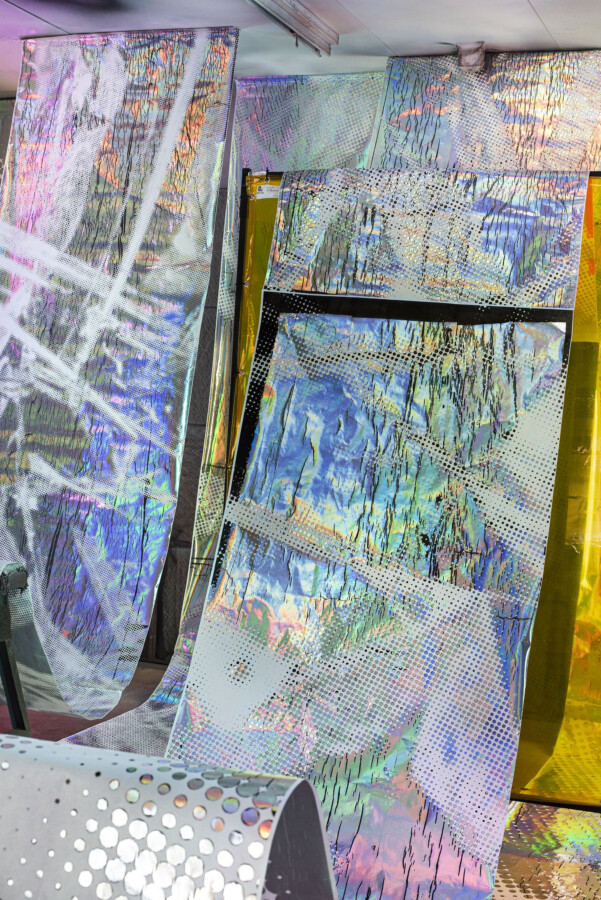