Alfred Conteh: It Is What It Is

Kavi Gupta presents It Is What It Is, a solo exhibition of new paintings by Alfred Conteh.

Following the recent inclusion of Conteh’s work in the traveling Smithsonian Institution exhibition Men of Change: Power. Triumph. Truth., and in The Legacy Museum’s inaugural exhibition at the National Memorial for Peace and Justice, Montgomery, AL, It Is What It Is extends the evolution of Conteh’s acclaimed portraiture series, Two Fronts. The work elucidates Conteh’s statement that Black Americans are fighting battles on two separate fronts—one from the outside, and one from within.

Conteh paints portraits of people he meets in and around Atlanta, Georgia, where he lives and works. He gets to know the people he paints; he learns about their personal histories, asks about their aspirations and the challenges they’ve faced. His portraits capture their outward countenance—their body, posture, and fashion—wIth photorealistic perfection, while his acrylic paints are augmented with earthen elements like soil, concrete, metal dust, and melted urethane in order to arrive at a deeper truth—elemental evidence of toughness amid dereliction.

“When you see my work, you see cracked surfaces, weathered paint, things left to ruin,” Conteh says. “When I paint these things, that’s the reality of a people. That’s the type of story I’m telling in this work, through the materials. The only beauty that I see in it is that folks are still here despite those circumstances.”

The title It Is What It Is is based on a parable about a pair of magic glasses, told by civil rights activist and comedian Dick Gregory. In the story, the universe offers certain people a chance to wear magic glasses that will show them the world the way it is, not as people say it’s supposed to be. If they put the glasses on, there are rules—they can never take the glasses off, and they can’t force anybody else to wear the glasses.

Stanton Road Water Boys depicts three young Black men Conteh met while they were standing on a roadway soliciting people to buy bottled water. Atlanta police routinely run kids like this off because they don’t have a business license. They keep coming back because they have few other opportunities to make a living.

“If there were opportunities for them to work, I doubt they would stand here trying to sell a two dollar bottle of warm water,” Conteh says.

IWB Shawty shows a young woman wearing a ball cap, diamond earring, and crucifix. She’s lifting her shirt to show she’s carrying a golden pistol. Atlanta recently eliminated permit requirements for carrying a gun. IWB is an acronym for concealing inside the waistband. Conteh was surprised to see somebody so young carrying a gun, but hearing about her circumstances it made sense. She was hustling, and found protection and community within a crew of people like herself. Her portrait looks unafraid and unapologetic.

Looking equally confident and strong are Bill and Anthony, a father and son Conteh met one day in a park. Bill is wearing jeans and crocs; Anthony is wearing Adidas and appears to completely trust his dad.

“It’s just feel good stuff—a typical fall day on the streets of Atlanta,” Conteh says. “I wanted to make sure that this image is one of the taller, bolder, and more visible works in the exhibition because it runs counter to the myth of Black fathers and Black men not being a pillar in their children’s lives.”

The man called Shampoo described himself to Conteh as a local player in the pimp game. He said he wasn’t in it as much anymore because of how the game has changed. Sex work always has the potential for exploitation he said, but the game has gotten so much worse, with more violence, more drugs, and human trafficking, even of children. He told Conteh that he couldn’t be part of that, and anyway technology today means sex workers can be more self-sufficient.

“This guy was looking a little disheveled, not as pimp tight as he could be,” Conteh says. “He was still in the game, but only part time. He also did construction.”

Daishon memorializes a moment when Conteh was confronted by one of his own biases. It shows a young Black man in a sweatshirt holding up two fingers. Conteh first saw this young man on the street and thought the hand signal he was flashing could be perceived as a threat. After talking to him, Conteh learned that he was on his way to get a haircut, and he was giving Conteh the peace sign. The encounter echoed experiences Conteh recently had after a knee injury, which required him to spend a lot of time at physical therapy in an area of Atlanta where not a lot of Black people live. As a big guy with dark skin walking with a limp, he was constantly confronted with a sense that he was being perceived by others as a threat.

“When it comes to me recontextualizing my perception, Daishon is a proxy for me,” Conteh says. “When I was his age, older people were wary of me. Older people would lock their door when I was walking. Now around the neighborhood if I see a young brother come in and I don’t know him, I’m wary. I have to check myself a lot and do self-examination and make sure if my understanding of things is off or on.”

That gap between what we’re seeing and what we think we’re seeing is what’s on view in Conteh’s portraits. It’s one part of the reality he’s trying to show us—one aspect of the world as it is. He’s not making distressed paintings; he’s painting distress. Our first reaction to the facade sticks with us, but reality includes what’s beneath the cracked surfaces, beyond our internal and external preconceptions. There’s more to It Is What It Is than what we can see.

Tags: Alfred Conteh, Chicago, It Is What It Is, Kavi Gupta Gallery, near west side 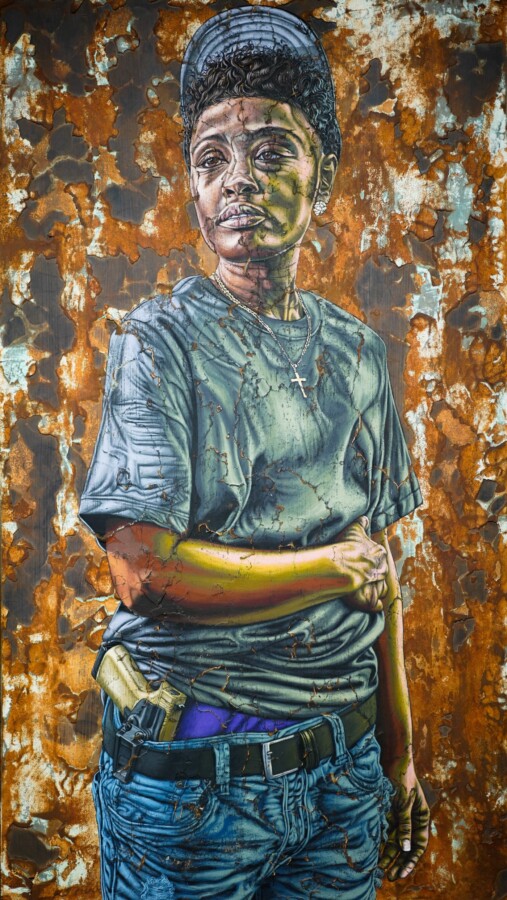