On view through Sunday, January 1st

We are thrilled to invite you to the first solo exhibition at Devening Projects of New York artist Matthew F Fisher. Renowned for his rich and evocatively surreal seascapes, Matthew presents Lakes, showcasing a new series of paintings and works on paper. The exhibition opens on Saturday, November 5 from 3 to 5 pm and continues until January 1, 2023.

Matthew F Fisher’s recent paintings and works on paper read like a confidential invitation to a private, tranquil, and dazzling wonder-scape. The promise of bliss unfolds as we marvel at these paintings and drink in the deep blue skies, radiant sunshine, shimmering azure seas and soft sands meticulously rendered in his intimate, jewel-like surfaces. He guides us through a world delightfully rich in the sensations and textures of summer, a season framed by a dream of retreat and regeneration. These are paintings redolent with the temptation to abandon the coarse reality of a world of responsibility and grayness, and enter a universe constructed to take us far away. Whether that journey leads to the promised nirvana is an appealing question at the root of Fisher’s practice. As we get physically closer to each work, we recognize his use of nimble spatial devices and delicately stylized forms to fashion a flawless utopian world. We’re looking at a universe fully designed to entice us; gaining absolute fulfillment in that place is another matter.

The allusions in Fisher’s work resonate within several compelling genres. Certainly, astronomy, maritime history, beach culture, and surfing themes permeate the work, but there’s also a strong association to the work of the 1960s Los Angeles artists associated with so-called Fetish Finish group – a term coined by Peter Plagens that referred to artists Billy Al Bengston, Helen Pashgian, De Wain Valentine, John McCracken and Craig Kauffman. Together and independently, these artists utilized materials and production methodologies commonly found in manufacturing, custom car culture, advertising, and surfboard design. The goal was to experiment with and apply new technologies to their work, while—literally—reflecting on the high-gloss modern and contemporary culture of LA in the ’60s. As Helen Pashgian explained in an interview in 2010, “Light and water, those two things sealed my fate… and you could only experience it in that way in California.” The pure seductive allure of work from that period is almost cross-disciplinary. Sculpture, painting, and functional design are beautifully merged into a new language that celebrates the pure pleasure of form. That elevated feeling of a joyful sensory encounter marks one of the important ways Fisher discloses the subtle themes in his work.

Precise modes of persuasion cannot be ignored in Fisher’s work. His masterful use of paint and the precision with which he delivers his fictional cosmos bring the experience of seeing his paintings in person to another level of aesthetic intake. It’s not just the rigor of craft that is so impressive, it’s the extreme efficiency of his vocabulary and compositional structure that fine-tune each pictorial event. This is painting that resonates through the absolute clarity of each visual statement. The result is something steadfast and profoundly memorable.

Matthew F Fisher (b. 1976, Boston, MA) lives and works in New York City. He has exhibited extensively across the country and internationally throughout his 20-year career, since graduating from Virginia Commonwealth University with an MFA and Columbus (Ohio) College of Art and Design with a BFA. His solo exhibitions include East Hampton Hole Phase Three at The Hole, East Hampton, N.Y.; Seas at Ochi Projects, Los Angeles; Four Seasons: A Solo Show at Deanna Evans Project, New York; Into the Blue at Johansson Projects, Oakland, Calif.; and Sun, Stars, Sea, and Moon at Airlock Gallery, San Marcos, Calif. His work has appeared in two-person and group shows from Ketchum, Idaho, to Boston and at many sites in between. International venues for his work include Taymour Grahne Projects in London, U.K.; Spazio 22 in Milan, Italy; Park in Tilburg, The Netherlands and The Breeder in Athens, Greece. He is the recipient of a Pollock-Krasner Foundation grant and a full fellowship at the Vermont Studio Center, among other recognitions. His work is held in the collections of Fidelity Investments and Pennsylvania Academy of the Fine Arts.

‘Drawing Nothing Out of Everything’ by Kim Feldmann for Simply Surf Magazine
‘Pastel Hues and Mesmerising Blues’ by Lara Mono for Dateagle Art
‘Abstract Nature’ by Arnau Salvadó on Metal Magazine
Sound and Vision Podcast
Matthew F Fisher’s Portraits of Beachscapes In ‘Into the Blue’, Juxtapoz Magazine
Whitehot Magazine interview 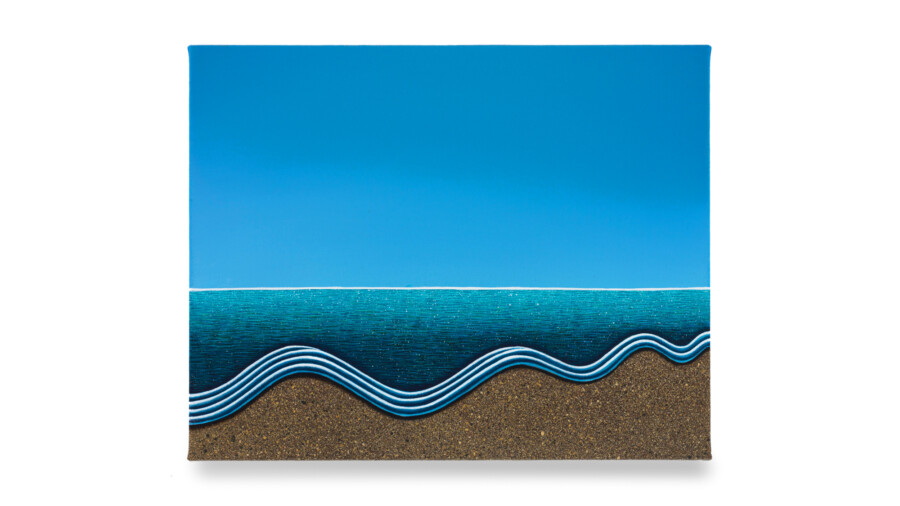