On view through Sunday, January 13th

Artist Laleh Motlagh (b. Tabriz, Iran, lives and works in Chicago, IL) has long nourished a relationship with the natural world, built on exchange and personal entanglement. In her performances and drawings, Motlagh cedes authorship and space to her collaborator, which has included cows, pigs, and her dog, Honey, a recurring artistic partner. For the artist and companion, the experience becomes an instance of mutual understanding in which respect and existence is accepted fully and equally. However, Motlagh’s work often extends beyond momentary exchange, as it interrogates both the borders between human and natural life, the admissible and taboo, as well as the geopolitical overtones found so prevalently in the discourse of border zones and notions of belonging.

In her newest body of work, Motlagh furthers her accord with flora, which has held a steadfast presence in her life, and whose universality embodies both geographic and political isolation as well as solidarity. As with her earlier work, her engagement is spoken in the language of her partner, producing a conversation rooted in silence and intentional contemplation. A conversation for which access relies on deliberate detachment from human discourse and environments.

In “Contemplation”, entering the secluded space that the artist has created, we are invited to consider our own conversations with the natural world in silence. Motlagh’s drawings of a Monstera, entitled Obscurity appear almost transparent, encouraging the viewer to move in closer and avert our gaze away from our own existence to the natural life hidden just outside of our senses. This gesture is an invitation to quietness. It evokes a handshake or recognition, as we pass between the borders of existence.

Untitled documents Motlagh’s earliest memories of her upbringing in Iran where plants were an abundant presence in her family’s home. Their leaves embracing and permeating the domestic space and synonymous with the truest sense of belonging and community. However, this image also evokes feelings of displacement and separation from our native lands, as the artist grapples with the borders placed between physical and political space. Though identical to its counterpart, a Monstera cultivated in a home in Iran can never be fully accepted as one grown in the West, its origin always foreign to the local ecosystem. As a result, this image have come to represent the duality of both welcome memory as well as turmoil and fear of which Motlagh and global Iranians now feel of their homeland.

In her final work, Quiet Chaos, Motlagh continues to investigate this dualism and universality. Filmed in Chicago with two locally sourced Monstera plants, the artist physically embodies her conflictions, moving between both the natural and human world, embracing the quietness of natural life while evoking her own visibility and solidarity to those who remain geographically distant. The artist grasps a white scarf affixed to a stick, a symbol of protest and revolution for women in Iran who have sought freedom with every fiber of their being. In this gesture the artist offers an exchange of discourse between the natural and the human world, moving between the border of contemplation and discord in which solidarity remains a universal constant. 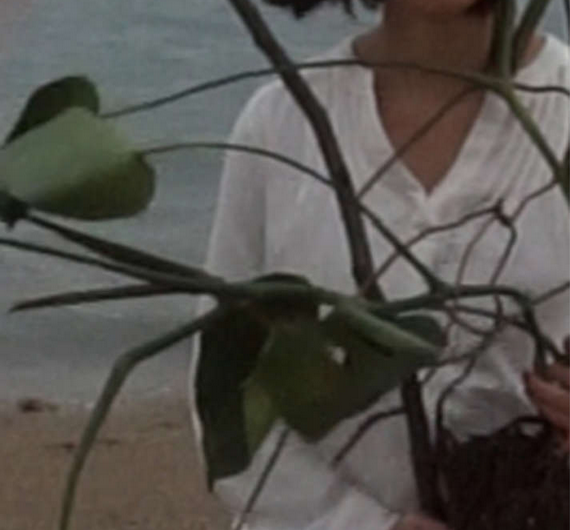