Western Exhibitions is thrilled to present Jade Yumang’s first solo show with the gallery, Open House Spatter. Yumang marries sculptural craft and literary appropriation by working from two 1964 articles on homosexuality and relating them to the gendered site of suburban living in the mid-20th century. Using monochromatic colour schemes and gay spatter patterning, Yumang recreates materials and objects that reference domesticity. Fabric-stuffed hands, arms, legs, and feet swell and curve to interact with textile versions of everyday household objects and attire. In seemingly innocuous sculptures, creeping limbs reach, encircle, and become entangled in the artist’s domestic constructions, separating the idea of queerness form a purely sexual state (as often dramatized and stigmatized in mass media) and instead, asking questions about everyday life in North America. Open House Spatter opens with a free public reception from 5 to 8pm on Friday, November 4 and runs through December 17, 2022. Gallery hours are Tuesday to Saturday, 11am to 6pm.

Tiered floor sculptures bedecked with dust ruffles share floor space with hanging arrangements combining slats resembling window blinds with fabric covered panels, all surrounded by rectilinear wall pieces featuring shelves and wallpaper. Handwoven scarves, chiffon curtains and crocheted lattices wend their way through these intricate structures, all of which are punctuated with severed legs, hands, feet and anatomical hearts along with the tools that cause such carnage — knives, cleavers and axe, all rendered in vibrant color and pulsating patterns. The east wall of the gallery will be pierced with 50 fabric knives, some stabbing severed body parts into the wall.

Yumang’s sculptures in Open House Spatter are based on two articles published independently from each other in 1964. “The Homosexual Next Door: A Sober Appraisal of a New Social Phenomenon,” by Sidney Katz in Maclean’s painted a sympathetic image while “Homosexuality in America” by Paul Welch in Life presented a residual McCarthy era undertone, comparing homosexuals to Communists and labelling them as a problem. Both articles frame a similar view that homosexuality can only be tolerated if it parallels itself to a traditional heteronormative practice of marriage. With the expansion of suburbs in the same late-1960’s era comes the rigid nuclear family archetype that both maps out and expels queer ethos into city dwellings (“gay ghettos”) or rural areas (“lesbian lands”). Prevalent during this push for domestic bliss were home décor advertisements. One of which were asbestos vinyl floor tile designs called “gay spatter” with whimsical colour combinations, which the patterns on the sculptures are based on. As well, occult, erotic, horror films rife with queer anxiety were gaining ground to reflect the abandoning of the Hays Code and a foreseeable change of the dynamics of queer kinship, haunted by the fear of the toxic nuclear family. Here random body parts reach, creep, crawl, slither, and taunt the foundation of the home. 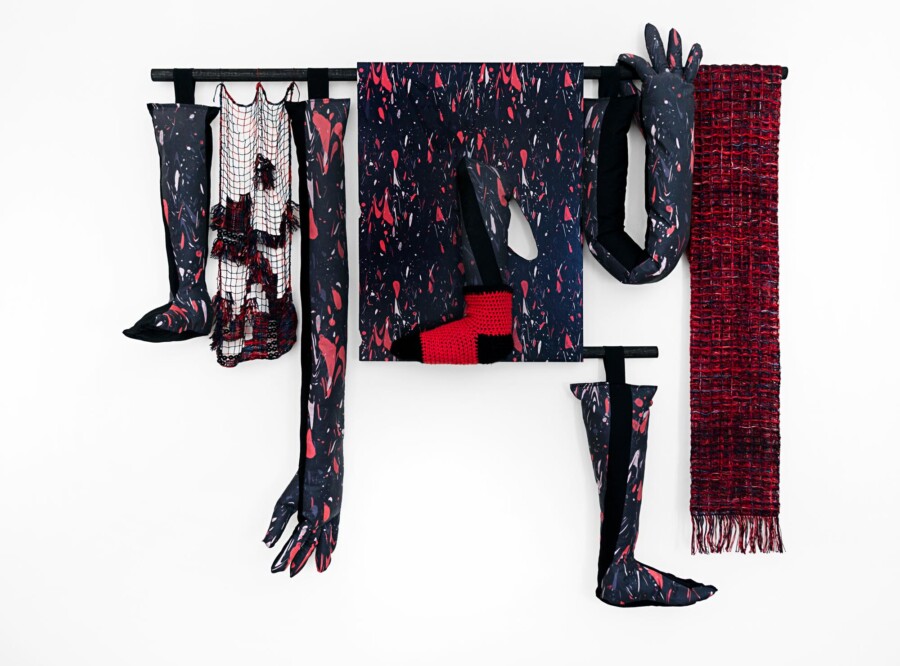