On view through Tuesday, December 20th

In her recent longform profile on Little in the New York Times, Hilarie M. Sheets described Little as “one of the breakout stars” of the Biennial, describing how his paintings “held court with a mysterious luminosity and presence.”

The phenomenal impact Little’s work had on Biennial visitors marks just one more milestone in a tremendous year, which also includes the stunning, retrospective tribute James Little: Homecomingat The Dixon Gallery and Gardens in Little’s hometown of Memphis, TN, and the inclusion of Little’s work in the era-defining traveling exhibition The Dirty South.

Black Stars & White Paintings builds on the momentum of Little’s landmark year, marking a moment of long overdue, global recognition of his status as a contemporary master.

Little’s erudite Black Stars captivate the eye with their velvety luster, dramatic, acuminate forms, and restrained palette of only two shades of black. Their elegant simplicity belies the months of exacting effort Little invests building up their luxuriant surfaces with dozens of layers of handmade encaustic paints—a medium he painstakingly manufactures himself in his Brooklyn studio.

Reflective of Little’s lifelong study of color relationships and formal aesthetic theories, these guileless masterworks demand veneration as monuments to pure abstraction. Yet, as their carefully crafted name reveals, they simultaneously proclaim Little’s grasp of this historical moment, and his awareness of how identity politics has often skewed people’s perspective on his work.

“I call them Black Stars because they are black stars,” Little says. “The name Black Stars is also a reflection on Black exceptionalism. It’s a celebration of that. But that’s not what drove me to make the paintings. That whole racial aspect isn’t any more important to me than trying to paint some emblematic arrangements with two tones of black.”

Little’s White Paintings similarly demonstrate his nuanced sensibility towards both formal aesthetics and socio-political subtext. Topped with a glossy, vicious stratus of white oil paints, pierced with a geometric lattice of voids, their surfaces blaze with multitudes of swirling, prismatic rainbows.

“The White Paintings are more or less experiments in color,” Little says. “The thing you see first is the last layer of paint, which is white. But if you look beyond the surface, within the squares and circles there’s a whole universe of activity. The paintings keep changing, keep engaging, and are animated. The title is catchy, and there’s a lot behind that. It’s where we live and how we live. It’s America. So I want to try to bring as much of that in as I can without sacrificing the integrity of what I’m trying to do.”

When asked what he most hopes people take home with them after an encounter with his paintings, Little answers with his trademark combination of sincerity and wit:

“Emotion. It’s about getting as much feeling out of the work as you can. There’s not a lot of verbiage surrounding what I do. You’re not gonna get a syllabi on my Black identity, or anything like that. The art world is overloaded with rhetoric and jargon. Just stop and put it on the wall and let’s see what happens. If it performs, it performs. If it doesn’t, it doesn’t. To have to explain it is what creates the deficit for me. Those things get in the way of having an experience with the art.”

From making his own mediums, to meticulously planning his intricate designs, to carefully applying dozens of layers to each painting over the course of as many weeks, emotion also defines every phase of the creation of Little’s Black Stars & White Paintings—emotion brought about by transcendent focus, exhaustive effort, and ecstatic appreciation for visions manifested as sublime masterworks of art.
Image: James Little, Spangled Star, 2022. Oil and wax on linen, 72 x 72 in. 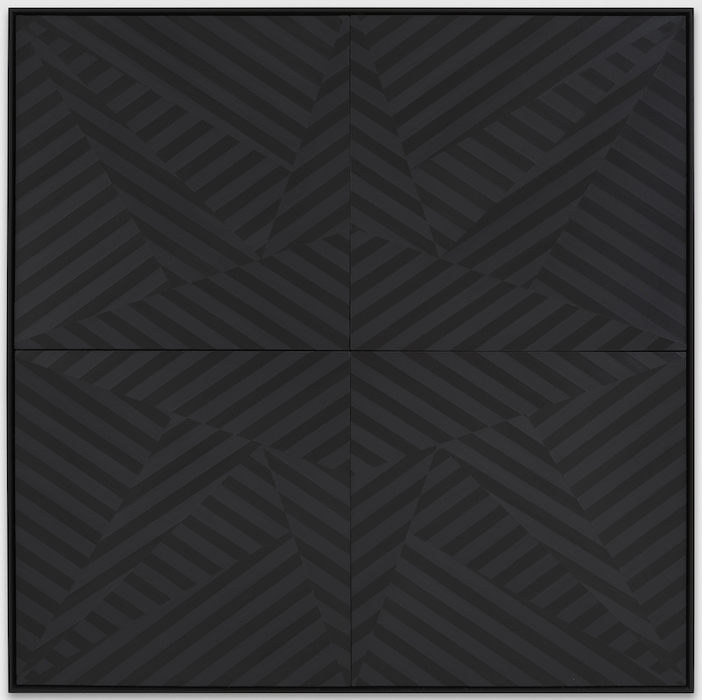