Join us virtually as we welcome Danielle Dutton, co-founder of The Dorothy Project; Barbara Epler, president of New Directions; and Mika Kasuga, executive editor at Union Square & Co., in a conversation about the pleasures, surprises, and ethics of posthumously editing and reissuing women’s work. This event will be hosted on Zoom webinar and moderated by Naomi Huffman, editor of the previously unpublished novel Toad, by the late Katherine Dunn, coming from MCDxFSG books in November 2022.

REGISTER FOR THIS EVENT HERE!

In recent years, publishers have reissued new editions of books by writers like Leonora Carrington, Nataliza Ginzburg, Tove Ditlevsen, Clarice Lispector, Elizabeth Hardwick, Ann Quin, Barbara Comyns, Han Suyin, Lucia Berlin, and many, many others, allowing these writers to be embraced by critics and readers alike. The process of finding, editing, and reissuing such works by late women writers offers extraordinary opportunities to contribute to and celebrate the canon of feminist literature, but is not without challenges. Join Danielle Dutton, co-founder of The Dorothy Project; Barbara Epler, president of New Directions; and Mika Kasuga, executive editor at Union Square & Co., in a conversation about the pleasures, surprises, and ethics of posthumously editing and reissuing women’s work.

Danielle Dutton is the author of Margaret the First, SPRAWL, Attempts at a Life, and the illustrated nonfiction chapbook A Picture Held Us Captive. She is an associate professor at Washington University in St. Louis and co-founder and editor of the award-winning feminist press Dorothy, a publishing project.

Barbara Epler started working at New Directions after college and is now the president and publisher. An independent for-profit press, New Directions brings out about 40 new books a year and maintains more than a thousand titles on its storied backlist: it has in recent decades added W.G. Sebald, Laszlo Krasznahorkhai , César Aira, Fernanda Melchor, Jenny Erpenbeck, Fleur Jaeggy, Roberto Bolaño, and Yoko Tawada, among many others. ND also publishes a very strong list of experimental poets.

Naomi Huffman is a writer and editor who lives in Brooklyn. Her work has appeared in The New York Times Book Review, The New York Times Magazine, The Atlantic, GQ, Bookforum, The Believer, SSENSE, and elsewhere. She began transcribing Dunn’s short stories, housed in the archives at Lewis & Clark College, in 2018, and is the editor of two of Dunn’s previously unpublished books, Toad and Near Flesh: Stories, forthcoming from MCDxFSG in fall 2022 and 2023.

Mika Kasuga is an Executive Editor at Union Square & Co., where she oversees the classics lines. Previously she was at The Modern Library, where she created a series devoted to reissuing classics by women, and One World. She began her career as an editor at Random House.

This event will be recorded and available to view after the event on Women & Children First’s YouTube Channel.

Email wcfbooks@gmail.com with questions or to request accommodations. 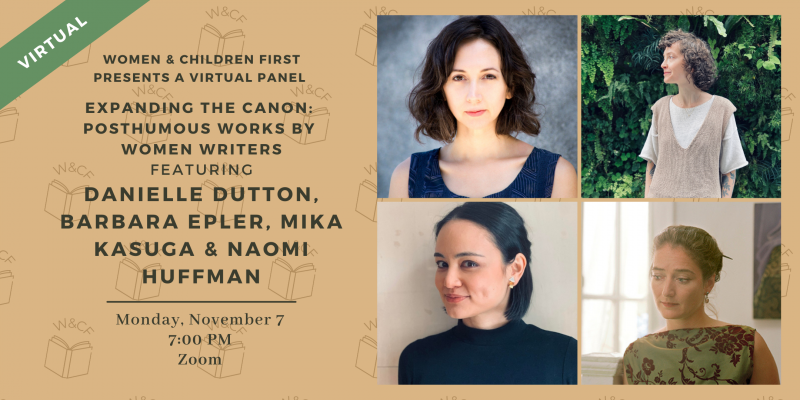