ANDREW RAFACZ is pleased to announce Duet, a two-person exhibition of new dyed silk works from Lauren Luloff and paintings from Alexander Nolan in Galleries One and Two. The exhibition opens Friday, November 4th and continues through Saturday, December 17th, 2022. This is both artist’s first exhibition with the gallery.

Lauren Luloff and Alexander Nolan moved to rural, coastal Maine in the spring of 2021 after each lived for the better part of two decades in Brooklyn, NY. Not surprisingly, the married couple’s daily life and art practices shifted. Duet brings their work together for the first time since and documents their individual responses to this significant life change, while revealing the inherent and ongoing affinities in their respective bodies of work, a result of working in close proximity for years.

Lauren Luloff paints dye onto stretched silk, un-stretching and steam-setting the material to allow the dye to become permanent. She is directly influenced by the landscape around her, sourcing colors and forms from what she immediately experiences. Through this relationship, Luloff creates a conversation between form and content, where narrative and figural elements give way to a tile-like grid, ultimately creating a playful contrast between chaos and order. With Duet, Luloff presents a new series of works inspired by a piano concert she saw in her new hometown of Lubec. The artist was transfixed with the way the pianist’s two hands played such disparate sounds. She observes, ‘one hand was darker, more rhythmic, more static, and the other hand was brighter, more melodious, and clearly the assured leader. I don’t know if it was just his particular way of playing, but it highlighted for me some of the huge differences between parts of oneself or of two counterparts in a relationship: the different tones and cadences we each have and how they complement, contrast and build upon each other.’ The artist began to explore this idea in both abstract imagery and in paintings with two hands going in opposite directions. She was interested in the hands emerging from and becoming part of the background or part of each other, while remaining visually and physically distinct.

Alexander Nolan’s paintings capture his deeply imaginative and humorous view of the world, filled with joy and tragedy, abundant with communal and individual moments. With the works in Duet, he has turned his attention to the natural world. Previously, his scenes often depicted a decidedly urban energy, observing both the bustle and margins of city life. They have shifted to land- and seascapes, capturing a quieter existence, by way of forests and backyards, wharfs and town festivals. His human protagonists are now seen chasing roosters, fishing or enjoying a lobster dinner. However, the empathy at the heart of Nolan’s work remains as vital as before, with all of the players in his scenes imbued with immediacy, emotion, hopefulness, and complexity. Nolan’s relocation to a rural place has been very invigorating for him. He observes, ‘the stars are very bright at night here. It feels like you are at the end of the world, which is a nice place for an artist to make work. It is a place of reflection. I enjoy having the time and space to sift through my imagination and memory.’

Both artists continue to work close to each other, in the same studio building on a hill overlooking town. Their relationship to place and to each other continue to inform their work. Luloff reflects, ‘I feel grateful for this experience to dive into a new body of work in preparation for an exhibition with Alex. We have been working side-by-side in our studios and at numerous residencies for about a decade, and I believe we’ve both learned so much through witnessing each other’s work and talking to each other about our paintings. We have embarked upon the huge project of moving to Maine, where we can both paint within a beautiful, natural landscape. In this way we are contributing to each other’s artistic practice and vision of how we can exist in the world.’

ALEXANDER NOLAN (American, b. 1980) lives and works in Lubec, ME. He received his MFA from The New York Studio School and his BFA from University of Wisconsin, Milwaukee. Recent solo exhibitions include Bernard Ceysson, (Luxembourg) and Crean and Company Online (London). Notable group exhibitions include Tif Sigfrids (Los Angeles, CA); Half Gallery (New York, NY); Romeo Aurel Schmidt, (New York, NY); Galerie Zurcher (New York, NY). He has a current solo exhibition, In and Out of the Rabbit Hole, with Ceysson and Benetiere (New York, NY). He has participated in residencies at Interlude (Hudson, NY); The Bau Institute (Cassis, France); and DNA Residency (Provincetown, MA). This is his first exhibition with the gallery. 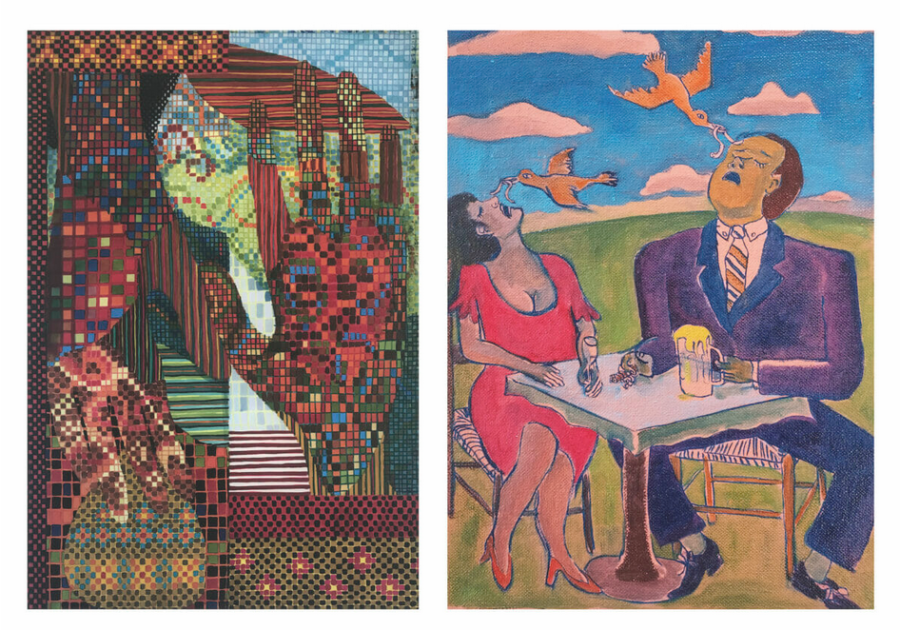