On view through Friday, December 16th

MCC’s Art Gallery is pleased to present Unstitched, a two-person exhibition featuring the works of Diana Gabriel and Griffin Carrick, Illinois-based artists and adjunct faculty in the MCC Art Department. Unstitched is an examination of traditional methods and materials and an opportunity to reflect on the threads that connect each of us to the past.

Free and open to the public

“Tumbaga” is the name of the gold, copper, and silver alloy often used to create ceremonial adornments by the Pre-Columbian indigenous people of Colombia and other countries in the lower Americas. Once the Spanish arrived, a large portion of these cultural artifacts were melted for gold and shipped back to Spain. By using tumbaga colors in her work, Diana Gabriel not only references the awe and loss she felt while visiting the remaining cultural relics at the Museo del Oro in Bogota but also the awe and loss inherent in her relationship to her Colombian heritage. Assimilating to American culture as an adolescent, Gabriel became disconnected from aspects of Colombian culture that were so potent in her memories of mud vases, crocheted doilies, knit “ruanas,” and hand-woven tablecloths, hammocks, and handbags. Using line and geometry, Gabriel forges a connection with the kind of Colombian handicrafts she deeply reveres but never learned, “restitching” the rift created by her migration.

Born in Bogota, Colombia, Diana Gabriel earned her BFA from Northern Illinois University in 2004, and her MFA from Illinois State University in 2007. She currently teaches at Harper College, College of Lake County, and McHenry County College. She has exhibited in Chicago and nationally. Some venues include the Chicago Cultural Center, Ukrainian Institute of Modern Art, Chicago Artist Coalition, and Willis Tower. Her work has been published in New American Paintings, The Chicago Tribune, and Sixty Inches From Center. She has participated in the Connecting Communities Residency at the John Michael Kohler Arts Center in Sheboygan, WI, Interface Residency at Water Street Studios in Batavia, IL, and Ragdale Residency in Lake Forest, IL. Gabriel is also an Alma Award recipient from Latino Arts Inc. in WI and a 3Arts nominee.

Quilling is a crafting technique that dates back to the Renaissance and traditionally involves strips of folded, curled, and rolled paper glued to a substrate. In Griffin Carrick’s work, she lets the patterns and shapes that arise from the quilling process form both the armature of the work and its composition, eliminating the need for a substrate. By merging surface decoration with structure, Carrick is trying to place her quillings in conversation with the textile arts of weaving, macrame, and lace, as well as architectural ornamentation.

Griffin Carrick is a quilling artist, educator, and interior designer born in Chicago and raised in Johnsburg, IL. She earned a Bachelor of Science in Architectural Studies, and a minor in Art History, from the University of Wisconsin-Milwaukee and a Master of Arts in Interior Design from the Savannah College of Art and Design. Carrick’s professional experience includes over 10 years of teaching design and working on both commercial and residential interiors design projects. Carrick’s quilled artworks have been included in several national group exhibitions, her quilled landscape tapestry, “Copper Hills” was a 2019 Etsy Design Award Finalist for Inventive Décor, and her artwork has been featured in Our State and What Women Create Magazines. 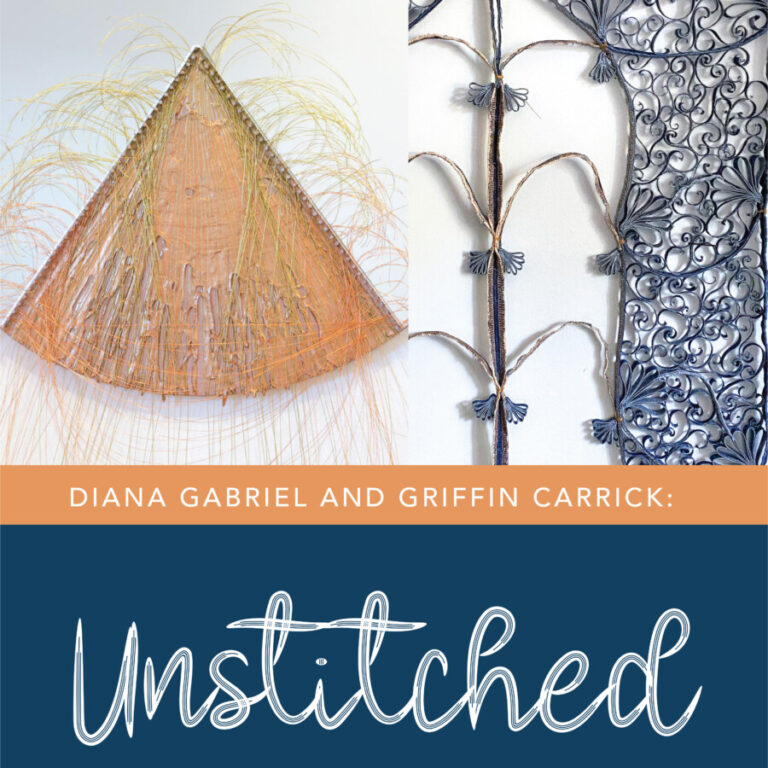