On view through Friday, January 7th

Throughout Ayanah Moor’s venerable and richly varied career, she has continually tested the multiple possibilities for the production of meaning within various cultural contexts. In earlier projects, Moor’s utilization of text and language, quotations and appropriated historical materials have not only played with the philosophical mechanics of communication and the specious presumptions by which participants (and even more, objects of study) within discourse have been considered knowable from the outside, but further pressured authority positions that would moderate and maintain conversations in the broadest anthropological sense. Upsetting the power relations between projected, regulated identities and more intimate, interior experiences of selfhood that extend beyond the categorical, Moor’s queer politics is joyously engaged with pluralism, mutability, and double entendre.

In her recent return to painting after many years apart from the medium, Moor has been exploring systems, layers, geometries, and devices of abstraction as other means by which to intervene in those dominant monolithic narratives that have directed civilization to our present point. Moor has populated many of the paintings of the past several years with images of Black women excised from photographic sources and print materials like Ebony and Jet magazines. This congregation of femme faces and figures have been worked through constellatory, compositional arrangements so that collage elements are placed in dialogue with bracing color schemes, all-over patterning, delicate webs of measured drawing, and active gestural marks. Other collage-free panels treat bodies as sites of pleasure continuous with their environments: interlocking convex forms in shades of warm brown, ruddy blushes, rouge, and daubs of electric rainbows suggest figures defiantly in flagrante, abstraction excited into a froth of polymorphous perversity.

Always in Moor’s practice is a keenly observant, sharp witted capacity to be saying more than one thing simultaneously. In James Baldwin’s analysis of jazz and soul as political speech acts, he insists on the pursuit of a vibrant sensuality (something akin to the useful eroticism of which Audre Lorde writes) and a well attenuated duplicity that “is something tart and ironic, authoritative and double-edged” in the singing of blues by Black women (“Letter from a Region of My Mind,” The Fire Next Time, 1963). This generative irony is visible everywhere in Moor’s work, including in the titling of her forthcoming exhibition with Ruschman, “Bless Your Heart.” Most anyone closely related to the American South can attest to this acknowledgement as a colloquial abstraction in its own right—with it, one can extend sincere charity to the blessing’s recipient while also throwing mega shade tantamount to calling out someone’s idiocy.

Irony, then, becomes a means by which to navigate a society’s contradictions and dangers, taking camp and queerness, Blackness, comedy, and the super-sub-cultural language of painting in stride. Irony redirects fragmentation into a fascinating audit of form and the unexpected paintings such a process yields.

Moor’s newest paintings are overlaid with slanted grids, each one perfectly out of sync with the layers that precede it. A darkly comedic harlequinade, an imposing trellis, a chessboard toppled with all of the patriarchy to which it’s associated falling with it: these are but some of the readings yielded from Moor’s rhombus arrays. Lipstick reds run amuck over creamy, fleshy browns and shiny black checkers. Drips, swipes, and erasures disrupt the uniformity of the diamond fields. Neither only disorderly or its opposite, Moor has developed an abstract formalism that runs in parallel to the scripts by which socialization is enforced (and the myriad grand failures and liberations belonging to queers, femmes, and people of color within hegemonic white supremacist heterosexist institutions). Delving further beneath creed, color, or other means of orientation, Moor has seized upon a syntax of sonic visuality vibrating with potential, crooning with longing, issuing welcome.
A sense of enclosure pervades many of Moor’s new, sizable panels—offhanded associations to interiors, home, and domesticity proliferate. Indeed, in conjunction with the more explicitly figurative paintings of the past few years, a burgeoning structuralism has emerged to compliment her treatments of bodies behaving relationally. This new work proposes a kind of habitat wherein alterity, deviation from social norms, and radical new formations for love and justice, race and gender may thrive as nascent schemata indigenous to Moor’s fortified grid-spaces. And as with her other staged ironies, the artist’s attention directed toward protective enclosures has opened up to expansive new territories.

Ayanah Moor (b. 1973, Norfolk, VA) lives and works in Chicago. She earned her MFA from Tyler School of Art, Temple University and her BFA from Virginia Commonwealth University. Her artwork is in the collections of the DePaul Art Museum, and Museum of Contemporary Photography (Chicago); Soho House (London, UK); Agency of Unrealized Projects (e-flux.com); the David L. Lawrence Convention Center, (Pittsburgh, PA) and the homes of many people she loves. Moor’s recent exhibitions include I Wish I Could Be You More Often at Cleve Carney Museum of Art (Glen Ellyn, IL); t/here or t/here at Intermission Museum of Art + Stand4 Gallery (Brooklyn, NY); Direct Message: Art, Language and Power, Museum of Contemporary Art Chicago (IL); Echoes: Reframing Collage, Museum of Contemporary Photography (Chicago, IL); 4 Queens, Test Site Projects (Las Vegas, NV); and in scenes of Universal Pictures’ 2021 film, Candyman, directed by Nia DaCosta and produced by Jordan Peele. Bless Your Heart is the artist’s first solo exhibition with RUSCHMAN. 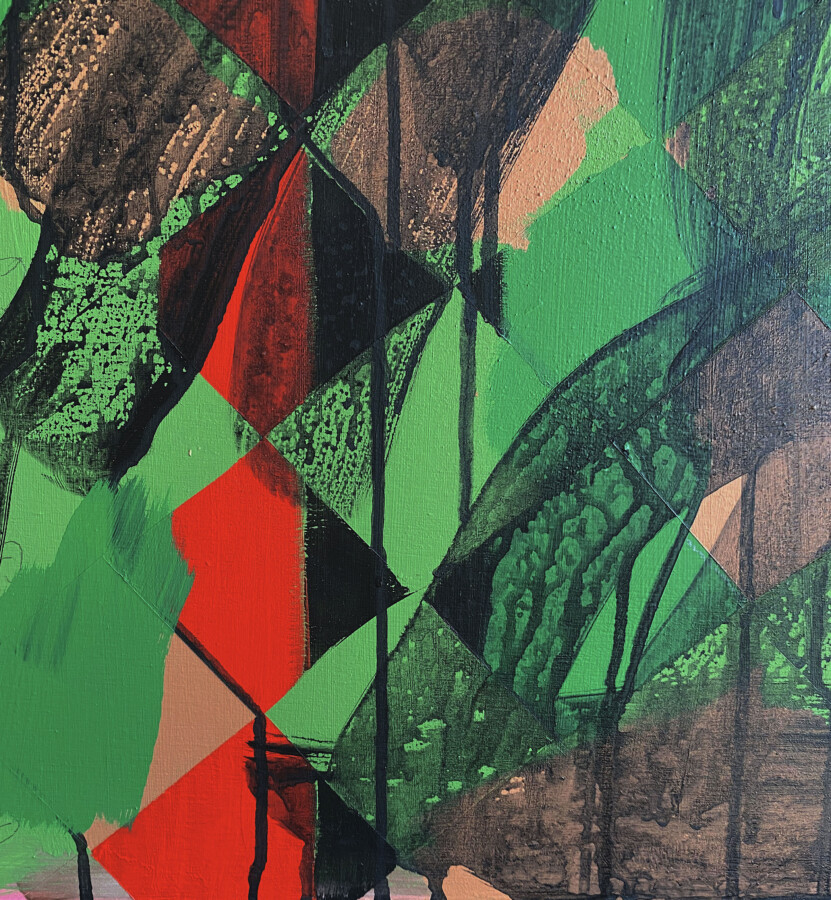