Join Byron Kim and other exhibiting artists as they consider the rich and sometimes idiosyncratic references and resonances in their own work, while also speaking to the histories of the monochrome and abstraction broadly conceived.

Byron Kim received a B.A. from Yale University in 1983 and attended Skowhegan School of Painting and Sculpture in 1986. Kim’s formal paintings double as portraits and landscape paintings, utilizing the languages of formal abstraction, observational paintings, and conceptual art. His well-known Synecdoche series (1991–present) is a group portrait composed of hundreds of 10 x 8 in panels, each painted to match the skin tone of a sitter. Four panels from Synecdoche are on display in Monochrome Multitudes. His work is in the permanent collections of the Albright-Knox Art Gallery, Buffalo; the Art Institute of Chicago; the Berkeley Art Museum; the Blanton Museum of Art, Austin; the Hirshhorn Museum, Washington, D.C.; the Museum of Contemporary Art, La Jolla; the National Gallery of Art, Washington, D.C.; the Norton Family Collection, Santa Monica; the Wadsworth Athenaeum, Hartford; the Walker Art Center, Minneapolis; the Whitney Museum of American Art; and the Worcester Art Museum 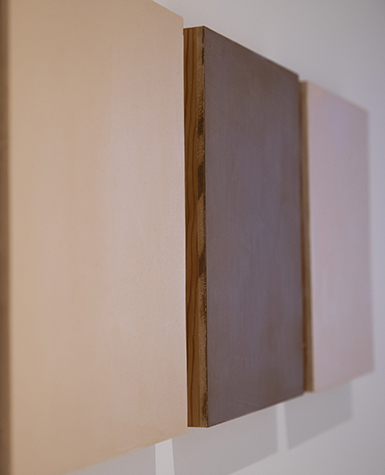