On view through Sunday, January 8th

Prairie is thrilled to present ‘innocence is cheap, but ten dollars lasts forever,’ a solo exhibition by Anoushé Shojae-Chaghorvand. The exhibition opens November 19 with a reception from 5-8 pm and runs through January 8, 2023.

The house here is an empty frame. Its negative space invites each of our unexamined wishes, our inherited hopes, our collective conspiracies. The house stands in for a colonial promise: the production of a nuclear family, of private wealth, of endless expansion. The house stands off-kilter, and something is wrong. The frame here is not only a welded armature that points to a dominant belief system, but a single cell in a snaking film strip, briefly frozen for our examination. In ‘innocence is cheap, but ten dollars lasts forever,’ the house is swarmed by a mob of waxy Wile E. Coyotes, and each of these trollish invaders contains a flammable wick within.

Anoushé Shojae-Chaghorvand rolls in the soot of that barren stretch between life and death, where other fanatical tricksters endlessly scheme and spectacularly fail. Her kinetic monstrosities animate a series of choked gasps toward earthly experience, cyclically returning from what seemed to be a most certain death. In this exhibition, she deploys the coyote—resilient, displaced, pack mammal—as her skeletal muse.

In an encounter with these works, we are asked to reflect on our position as a constructed audience: to a prostrate central subject, to the television and film industries, to American culture itself. The poster of this blockbuster is meat-hooked to the wall: its silicone faux-brick arch, which resembles the facade of a wayside shrine, is pierced and pulled like stretched flesh. Small fires burn irregularly through the wiring of a household appliance which doubles as a nervous system for a convulsing, tattooed, human-sized coyote. This is the making of the American landscape and the material focus is a nation’s obsession with entertainment via its most overzealous, ever-adapting foil character.

Intervening on the physics of colonial capture, the coyote acts as the disruptor of stillness. Shojae-Chaghorvand takes this narrative construction of winners and losers and pans away from the victors, centering the frame instead on the subjects we vilify. The ticking time bomb, the sinking ship, the desperation and adaptability of liminal creatures. Her gesture here is the depiction and dissection of an anthropomorphized animal’s endless, cartoonish hunger and suffering—the tethers that jerk around desire and pain. The absent laugh track looms in unheard echo, fire is the operation waiting to be set into motion. 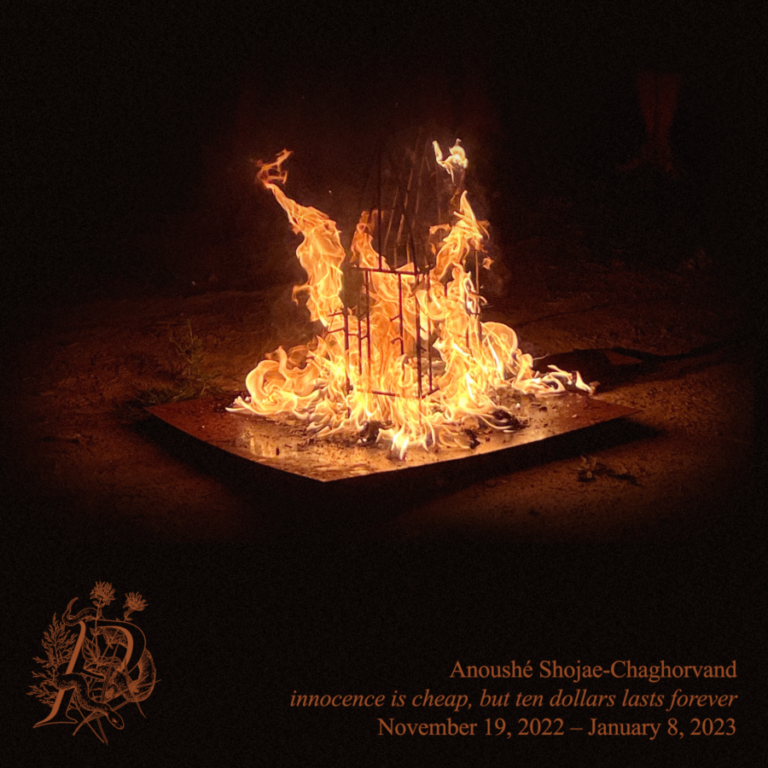