STü is a soup kitchen community exchange project. Join us for a bowl of warm goodness as we get to know the work of local and international performance artists. Selected guests will present short introductions to their work (or a topic of their choice) before everyone engages in conversation over a hearty bowl of vegan soup. Free and open to the public.

Non Grata | Anonymous Boh+Devil Girl [Estonia] is a performance group that travels constantly all over the world – Asia-America-Europe – presenting original performances and organizing the Diverse Universe Nomadic Performance festival. The main characteristics of Non Grata members are anonymity in group work, ignorance of the local art world, and critique of mass media. Non Grata manifests creative freedom and Storm Generation while physically weaving together a worldwide creative network. Around the name NON GRATA there have been different hushes and shushes for a long time. Already from the point of view of death of conventionalization of art, NON GRATA has embodied the horrible and unwanted disembodiment of the human person, from which the meaninglessness of nowadays art is pouring out. For those whose world of arts starts from the point where the art world ends, NON GRATA has been a liberator, the orphic gap in a seemingly unalterable course which, however, betrays us; it is a cure from incest. The main point of the group is ethical – it is the image of primitivism, impersonality and experimental creativity. The performances of the group take place according to the logic of avoiding codes. The presentations are physical texts whose ways of orthography and reading are kept within limits of real actions by the group members. Aesthetical and provocative challenges are represented in places where the Art World doesn’t work. www.nongrata.ee

Tina Pētersone [ b. 1994 Latvia] is a Visiting Resident Curator through a partnership between the Jackman Goldwasser Residency Program at Hyde Park Art Center and CEC ArtsLink. Tina is an independent curator based in Riga who holds an MFA in Curating from Goldsmiths, University of London. In 2017 she finished a BSc in Communication Science from the University of Latvia and spent an exchange semester at Zeppelin University studying BA in Communication & Cultural Management. Tina is a co-founder of an art space temporary.lv. In 2019, she was appointed as the first curator-participant at Biennale de la Jeune Création Européenne — a traveling group exhibit hosted alternately for one month by each of its seven partner countries. In 2020, she won the first “Young Curator!” prize at the Riga Photography biennial. In 2021, Tina was granted the CEC ArtsLink International Fellowship at the Hyde Park Art Center in Chicago, IL, USA. She was also recently nominated by the Ministry of Culture of the Republic of Latvia to partake in the Cité Internationale des Arts residency in Paris in January 2022. Tina’s interests revolve around technology-mediated relationships, psycho-geography, body politics, collective memory, Post-Soviet identity.

Joseph Lefthand [Chicago] is a year-long artist in residence at Hyde Park Art Center who creates performance works that look at institutional and historic systems of violence.

Kezia Dorsey Swann [Chicago] is a storytelling artist whose work highlights the fallacy of fact by using ancient techniques of dreaming and imagination to find that which is true. To this extent, their work has a heavy focus on futuristic myth-making and historical fabulation. They often employ dialogue, song and sound that is felt before heard. They value deep listening for understanding by incorporating body and emotional intelligence. Things are repeated, chopped, elongated, reduced and expanded based on how they feel within the immediacy of the moment. Time Traveling is not only a subject matter in most of their work but a method of creation/ a praxis/ a pedagogy. They push against, overlap and reject syncopation often. Growing up in The Black Pentecostal Church traditions, despite their queerness, they think of the work as trying to find that which is holy, whole, holistic and/ or holds within Black and/or Queer functionality. www.keziawaters.com | www.instagram.com/fagette4life_

Defibrillator presents provocative and reputable programming to champion artists and audiences who are diverse in their culture, identities, and worldview by providing a valuable platform with a propensity for speaking to the concerns of all those who are invested in alternative modes of being in society. www.dfbrl8r.org

Hyde Park Art Center is a hub for contemporary arts in Chicago, serving as a gathering and production space for artists and the broader community to cultivate ideas, impact social change, and connect with new networks. The Art Center functions as an amplifier for today and tomorrow’s creative voices, providing the space to cultivate and create new work and connections. HPAC offers a comprehensive set of programs that serve the creative and resource needs of artists and our communities. Through our exhibitions, artist talks, studio art classes, international and local residency program, free public events, satellite class sites, and professional development opportunities we work to provide the space for artists at every age and stage to cultivate their practice, build connections, and impact our world. www.hydeparkart.org

el Laboratorio Tangencial de Arte Posnación {\}() {\}∆‡!(){\} [No Nation] is/as an independent disorganization founded in 2012. Its mission has been to serve as an artistic platform for experimental cultural production through Performance Art , language, image making, sound, exhibitions and screenings…etc. We are deeply concerned with critical concepts of origin, the affirmation of agency, intimacy, spontaneity and collaboration in how art is created, discussed and experienced. America is not a country. Calling a country a continent and a continent a country has invisibilized for 500 years the more than 37 countries that exist in the so called American continent. Which is actually called ABYA YALA and TURTLE ISLAND; name given by its native inhabitants way before the start of the European invasion in their 1942. Nations are arbitrary delineations in geography that through history have been kept the way they are by making wars against each other and others. Website: https://nonationartlab.cargo.site/ 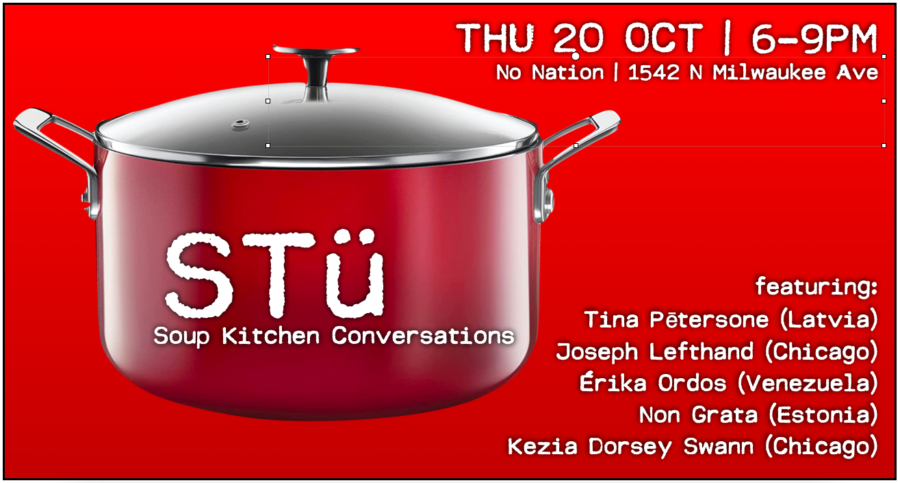