Medea Benjamin will discuss War in Ukraine: Making Sense of a Senseless Conflict. She will be joined in conversation by Bill Ayers.

This event will be held in-person at Seminary Co-op. At this time, masks are required for in store events.

About the book: Russia’s brutal February 2022 invasion of Ukraine has attracted widespread condemnation across the West. Government and media circles present the conflict as a simple dichotomy between an evil empire and an innocent victim. In this concise, accessible and highly informative primer, Medea Benjamin and Nicolas Davies insist the picture is more complicated. Yes, Russia’s aggression was reckless and, ultimately, indefensible. But the West’s reneging on promises to halt eastward expansion of NATO in the wake of the collapse of the Soviet Union played a major part in prompting Putin to act. So did the U.S. involvement in the 2014 Ukraine coup and Ukraine’s failure to implement the Minsk peace agreements. The result is a conflict that is increasingly difficult to resolve, one that could conceivably escalate into all-out war between the United States and Russia—the world’s two leading nuclear powers. Skilfully bringing together the historical record and current analysis, War in Ukraine looks at the events leading up to the conflict, surveys the different parties involved, and weighs the risks of escalation and opportunities for peace. For anyone who wants to get beneath the heavily propagandized media coverage to an understanding of a war with consequences that could prove cataclysmic, reading this timely book will be an urgent necessity.

About the author: Medea Benjamin is the co-founder of the women-led peace group CODEPINK. She is also co-founder of the human rights group Global Exchange, the Peace in Ukraine Coalition, Unfreeze Afghanistan (which advocates for returning the $7 billion of Afghan funds frozen in U.S. banks), ACERE: The Alliance for Cuba Engagement and Respect, and the Nobel Peace Prize for Cuban Doctors Campaign. Medea has been an advocate for social justice for 50 years. Described as “one of America’s most committed — and most effective — fighters for human rights” by New York Newsday, and “one of the high profile leaders of the peace movement” by the Los Angeles Times, she was one of 1,000 exemplary women from 140 countries nominated to receive the Nobel Peace Prize on behalf of the millions of women who do the essential work of peace worldwide. She is the author of ten books, including Drone Warfare, Kingdom of the Unjust, and Inside Iran. Her most recent book, coauthored with Nicolas J.S. Davies, is War in Ukraine. Her articles appear regularly in outlets such as The Hill, Salon, CommonDreams and The Progressive. Her twitter handle is @medeabenjamin.

About the interlocutor: William Ayers, Distinguished Professor of Education and Senior University Scholar at the University of Illinois at Chicago (retired), founder of both the Small Schools Workshop and the Center for Youth and Society, taught courses in interpretive and qualitative research, oral history, creative non-fiction, urban school change, and teaching and the modern predicament. Ayers is the author of numerous books and articles. He lives in Hyde Park, Chicago with Bernardine Dohrn, partner, comrade, friend, co-parent and grand-parent, inspiration, co-author, lover, and soul-mate for close to half a century. 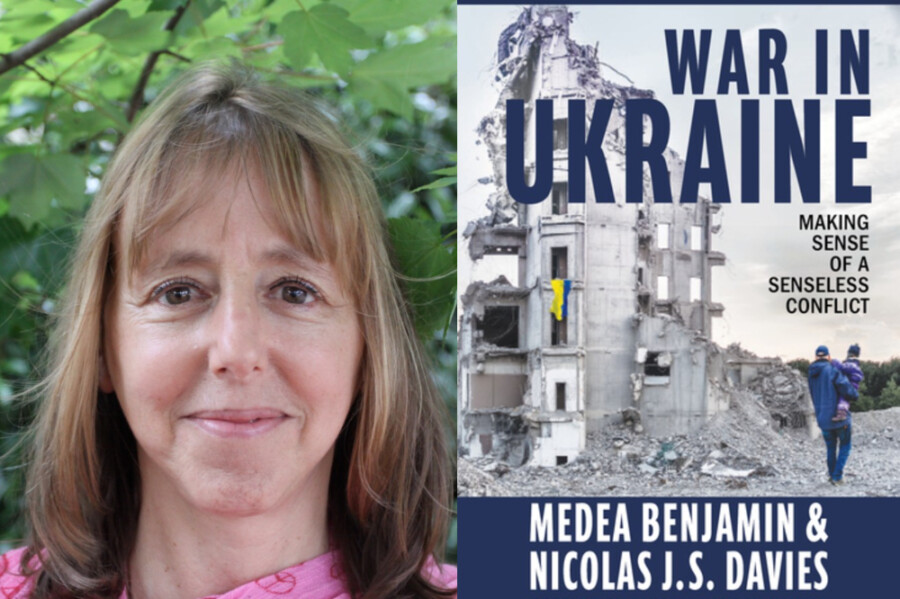