DOCUMENT is pleased to present TURN BACK, Gordon Hall’s second solo exhibition with the gallery.

TURN BACK includes new sculptural, photographic, and light-based works which range from recreations and “un-makings” of recognizable items to wholly abstract forms. These sculptures interrogate the potential for objects to affect us emotionally, socially, and physically, asking us to consider the poetics of everyday objects by shifting their recognizability and functionality. As a sculptor and performance-maker, Hall’s background as a dancer informs their  approach to sculpture, inquiring into the capacity of static objects to function like performing bodies.

The artist’s ongoing interest in furniture continues in TURN BACK, in which altered recreations of a table leg, a step stool, a mirror, and a bench for trying on shoes operate to conjure absent bodies and alternate possible uses. Forms related to clothing also appear – a belt, a tank top, a ribbon — under dimmed lights in the gallery creating a suspended sense of time in an intimate, even erotic, interior space. A projected animation depicts the barely-there movement of a stream of light cast along the floor at the end of a day, the first work of this kind the artist has produced. This video projection extends the artist’s creation of subtly rendered surfaces that request slow forms of attention to subtle formal and chromic differences, evoked here also through sculptures covered in ballpoint pen marks, colored pencil, enamel, and graphite.

In reformulating objects ordinarily in the background, Hall wishes not only to bring forth that which recedes into the periphery, but to emphasize horizontal modes of relation between forms as they touch the floor and walls. Hall’s focus on backgrounds is embodied here through a blue-black cast concrete replica of a stone lion who faces away from us in the gallery, refusing its job as an outward facing ornament or protector of private property. A photograph of the original lion where Hall first encountered it has been rubbed onto the gallery wall. Hall’s recasting and rearrangement of objects refuses their normative roles in order to open up different webs of relation between people and things. A mirror cast in stone serves not just as a revocation of its material function — a transformation into “a matte surface that rebuffs reflection”1 — but also, in taking away one use, offers another:  an inversion of our own perception as bodies in space.

This negotiated existence is further engaged by the exhibition’s titular invitation, which unfolds as a “spatial choreography.”2 TURN BACK is at once a prompt and problem: an angle of approach, an embodied position in relation to the installation, a visual reorientation. 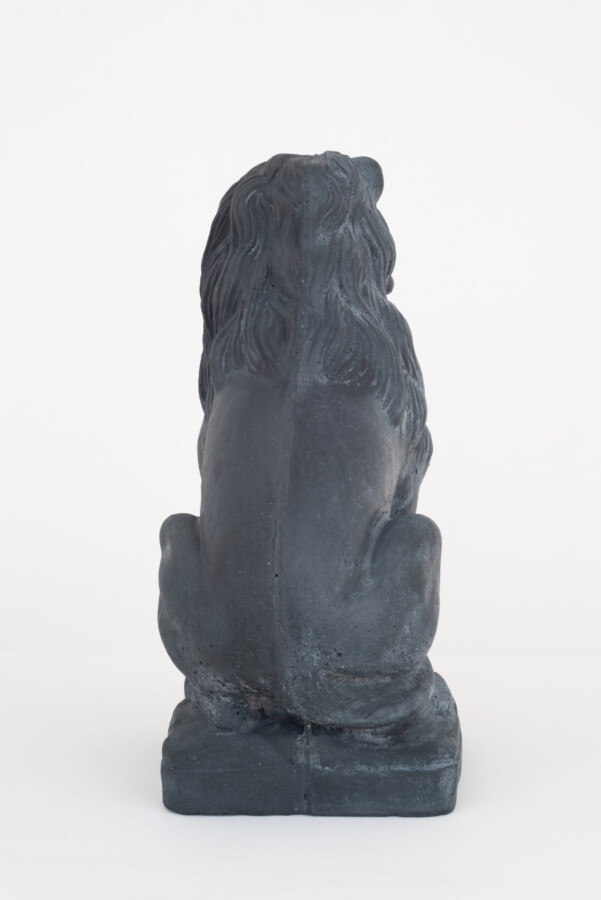