Su Su: From Your Special Friend

Kavi Gupta presents From Your Special Friend, a solo exhibition of new paintings by Beijing-born, Pittsburgh-based artist Su Su. This exhibition coincides with the inclusion of Su Su’s work in the groundbreaking exhibition Wonder Women, inspired by Genny Lim’s eponymous poem and featuring thirty Asian American and diasporic women and non-binary artists responding to themes of wonder, self, and identity through figuration, curated by Kathy Huang for Jeffrey Deitch in Los Angeles, CA; and State of the Art 2020 at the Sarasota Art Museum, Sarasota, FL; and follows her recent participation in There Is Always One Direction, the widely applauded exhibition during Art Basel Miami Beach 2021 at the Rosa and Carlos de la Cruz Private Museum, Miami, FL; and acclaimed group exhibitions at The Andy Warhol Museum, Pittsburgh, PA; The Crystal Bridges Museum of American Art, Bentonville, AR; and The Carnegie Museum of Art, Pittsburgh, PA.

Su Su’s paintings express the complicated interplay of aesthetic and societal influences that inform her daily experiences as a Chinese-born, female artist living and working in the United States. Her early painting education in China was, ironically, rooted in the history and techniques of classical Western figurative painting. Similarly, her most influential childhood cultural interactions were dominated by imported American entertainment products, like Walt Disney movies.

Su Su considers the work in From Your Special Friend an empathy offering—a gift to replace a lie of diminishment with a multitudinous truth.

The exhibition brings together works from two distinct bodies of work: Su Su’s masterful, traditional oil paintings on canvas; and her more experimental Bombyx paintings, made by injecting streams of oil paint through silk, using a sui generis technique of Susu’s invention.
The Bombyx paintings are so-called for their relationship to the (there is only one type of silk month. Instead of a particular type of ) silk moth. The name refers simultaneously to the silk substrate Su Su utilizes for the paintings, and to the enchanting, cilia-like appearance of the paint strands Su Su injects through the silk, which recall the hirsute mane of the Bombyx moth.

Su Su’s more traditional oil paintings convey the weight and seriousness with which she approaches her craft, while also embodying the lightness and humor with which she confronts the big questions she faces as an bi-cultural female artist. The delicate and intricately composed compositions demand the attention of the viewer, while the glint in Su Su’s eye, the informality of her pose, and the whimsy of the melting Bambis, impish dragons, and voluptuous peaches belie a childlike sense of wonder at a world still full of odd mystery.

In most of the works in the exhibition, Su Su utilizes her own body and face as a narrative point of contact between artist and viewer.

“I think a lot of these paintings reflect how I see myself as a female artist,” she says. “There is a feminist voice behind all of these works. I want to highlight female power, and female power in art and culture. There is also something about me sexualizing myself as an Asian woman, in my way, rather than letting others sexualize me as an Asian woman. I think all of the paintings in this show tell some story of that.”

It wasn’t until Su Su came to America on a Masters scholarship to Carnegie Mellon University in 2010, and began visiting museums such as the Metropolitan Museum of Art, that she gained an appreciation for how Westerners perceive Chinese art history—mostly through the lens of ancient ceramics bearing painted scenes of peach trees, deer hunts, and verdant gardens. Su Su recalls her family deriving utilitarian pleasures from ceramic plates and cups decorated with the same iconography, which she was taught reference the realm of the female goddess Xi Wangmu, or Queen Mother of the West. Prized by Western institutions as idealized emblems of Chinese culture, these objects and images are routinely misrepresented and misconstrued, attributing the iconography and its surrounding narratives not to the proper source of a female deity, but instead to the foibles and desires of male emperors.

Inherent in the work is Su Su’s sense of being caught between two sets of cultural assumptions.

Su Su’s paintings visually embody the internal and external strangeness of negotiating this type of intercultural confusion, both as a woman and an artist. Her multi-layered compositions depict a hyper-chromatic universe in which one woman’s body and soul are in a constant state of metamorphosis amidst a swirling pantheon of Chinese myths and Western pop culture icons.

“I’ve had plenty of bad experiences. I get checked for stereotypes, as a female, or as an Asian female,” she says. “Once you don’t see me as an individual, that creates distance and barriers. I’m fighting that all the time.”

“Instead of being angry and frustrated, I would rather provide more, and be more open,” Su Su says. “The best I can do is make myself available—let people have access to me, talk to me, get to know me. That’s the attitude. When you’re open and not afraid and ready to share yourself, you’re more empowered.”

As for the identity of the special friend referenced in the title, it might be the artist; or perhaps the art is a special friend to both artist and viewer.

Recent exhibitions of Su Su’s work include Wonder Women, inspired by Genny Lim’s eponymous poem and featuring thirty Asian American and diasporic women and non-binary artists responding to themes of wonder, self, and identity through figuration, curated by Kathy Huang for Jeffrey Deitch in Los Angeles, CA; State of the Art 2020, The Crystal Bridges Museum of American Art, Bentonville, AR, traveled to the Sarasota Art Museum, Sarasota, FL; The 25th Aniversary Show, Andy Warhol Museum, Pittsburgh, PA; There Is Always One Direction, the Rosa and Carlos de la Cruz Private Museum, Miami, FL; Counterpressures, The Carnegie Museum of Art, Pittsburgh, PA; Rising Voices 2: The Bennett Prize, Muskegon Museum of Art, Muskegon, MI; and On Common Ground, Chautauqua Institution of Art, Chautauqua, NY. Works by Su Su are held in the permanent collections of the Rosa and Carlos de la Cruz Private Museum and Crystal Bridges Museum of American Art, Bentonville, AR, among many others. Su Su received an artist scholarship to attend graduate school at Carnegie Mellon University, where she completed her MFA in 2015 and worked as a guest professor at the School of Drama from 2015-2020. Her paintings have been featured in publications such as GALERIE Magazine, American Art Collector, and Art Pulse Magazine, among many others. She lives and works in Pittsburgh, PA, USA. 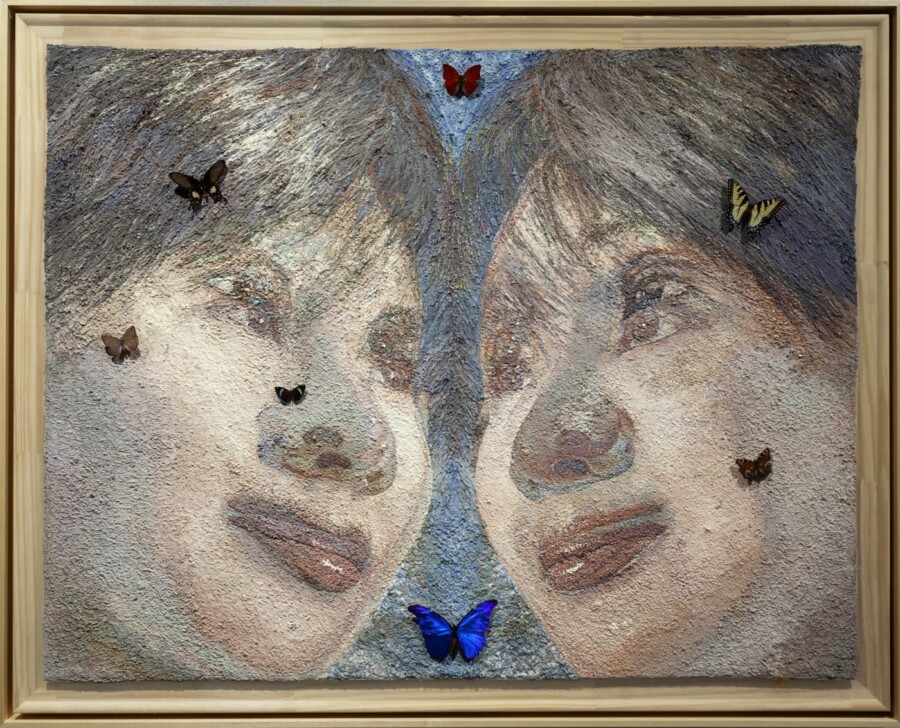