On view through Monday, October 23rd

The Korean contemporary painter S.H. Kim marks his Chicago art debut with a solo show, “Hands Remember,” at FLXST Contemporary. Known for his bold and thick application of oil sticks and pastels on his paintings inspired by his childhood animé culture, Kim shifts gears in his show at the gallery. FLXST Contemporary features 12 works on paper and one painting on a panel created using oil sticks and pastels. Drawn to popular culture, film, television, and literature, the artist uses characters and scenes from them as source material for the artwork in “Hands Remember.” The gallery features scaled-down works on paper and his painting on the panel, drawing viewers to a color palette and skill that captures the earnestness and sentimentality of the artist. The artwork isn’t treacly, however—quite the opposite. Kim shows viewers a softer side to his oeuvre that elevates references from popular culture—the artist confronts the ubiquity of mass media through his gestural mark-making and the choice of subjects. Memory is vital for Kim, as it shapes his place in the world.

to use oil sticks, apply layer atop layer, and make visible the cinematic scenes that the artist has filed in his mind.

Kim’s works, like Milton Avery and Philip Guston, show simplicity, sincerity, and authenticity. The materials he chooses, such as oil pastels and oil sticks, give viewers a sense of intimacy when they see his paintings. With his paintings, Kim shows how contemporary film and literature with distinct characteristics are reduced to uniform colors when processed through consumer culture. More recently, Kim has started using animations from his childhood as references. With Japanese and American animations from the 1970s to the 2000s, he combines the nostalgia of those days with contemporary paintings for S.H.Kim’s latest series.

Artwork Credit:
S.H. KIM, “I’m not pretending to be somebody else, and you are,” 2022. Oil stick and oil pastel on panel. 20 x 16 x 1 inches. Courtesy of the artist and FLXST Contemporary. 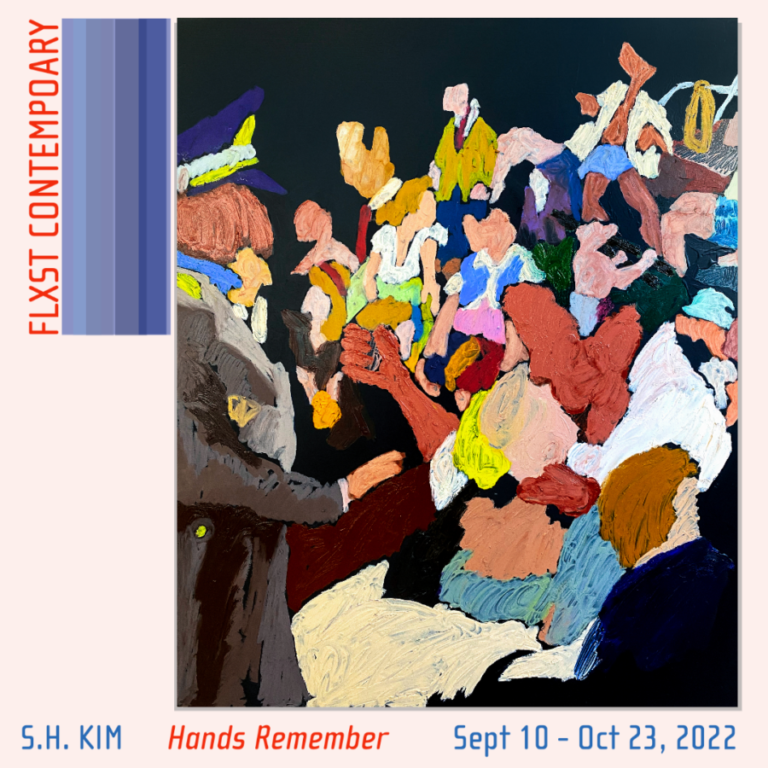