Prairie is pleased to present Liz’s Childhood Computer:2003-2005 – a solo exhibition by Chicago-based artist Liz Vitlin opening this Saturday, September 24 with a reception from 5–8 pm.

Childhood is often understood as a domain of transcendent familiarity: we are able, we think, to recognize marks of it as reminiscent of our own. However individual our experiences may be, we were all once children, we all experienced something called “childhood”. For Liz Vitlin, by exemplary contrast, engagement with the digital archive of her younger self is a means by which the familiar is reconstituted as an artifice of dislocation. Finding neither familiarity nor resonance with the digital record of her earliest years, Vitlin grounds the work in this exhibition through the apparatus with which it was originally generated: her computer. Using material salvaged from the dusty hard drive of a computer custom-built by her father, a former hardware engineer for the Soviet Union, Vitlin presents her 8-year-old self as a phantom image of 2003-2005 era girlhood. For the first installment of her ongoing project Liz’s Childhood Computer, Vitlin extracts videos, photographs, and Microsoft Word compositions from their legacy operating system and transfers them to the contemporary gallery space. The result is a compelling body of solitary gestures permeated by a prepubescent acuity for disparate class and technological signifiers of the time.

Scattered around the room, three videos play on vintage Sony CRT monitors. Each video features anonymous child figures caught in infinite looping gestures. Filtered through a long unsupported video codec, these jittery, unstable performances transmit a manic excitability. While silent, the children and the camera move with a disjointed rhythm, evoking the boisterous sounds of youthful play. The signal is grainy and askew, placing the viewer behind a muffled wall of noise and desaturation. Like the figure wrapped in green crepe paper, we are caught in a state of permanent entrance.

Through text and “drawings,” the artist composes an earnest dialogue with the predominant institution of her life: public school. Text pieces act as vestiges of educationally mandated expression, while Microsoft Word documents offer an anachronistic update to the traditional child’s crayon drawing. Hung nearby, photographs focus on assemblages staged in the artist’s home environment. Toys, playmates, and family members are posed and re-posed for the camera. Beds lay made and empty, doll furniture arranged without small bodies to fill them. We are viewing privileged instants, not portraits, of a domestic dynamic in-progress.

Our amusement at the precocity of these works is quickly overshadowed by an uneasy suspicion that they were never intended for our eyes. Like a parent eavesdropping on their child, we are allowed only glimpses of a clumsy, sporadic interior. These works beg for familiarity, but, denied a locality, settle into cold documents of an eager desire to create. It is only through one of the photographs — a hand displaying the name of the artist and the corner of an AIM instant messenger chat in progress — that we are provided with something akin to a locality. These images are located neither in a house nor the mind of a child, but a computer somewhere in between.

Liz Vitlin (b. 1994 Cleveland, Ohio) lives and works in Chicago. Vitlin received a BFA from the School of the Art Institute of Chicago in 2016. Recent exhibitions and screenings include the Czong Institute for Contemporary Art (Gimpo, South Korea), Julius Caesar (Chicago), Flat Earth Film Festival (Reykjavik), and a series of lectures at SUGS Gallery (Chicago). 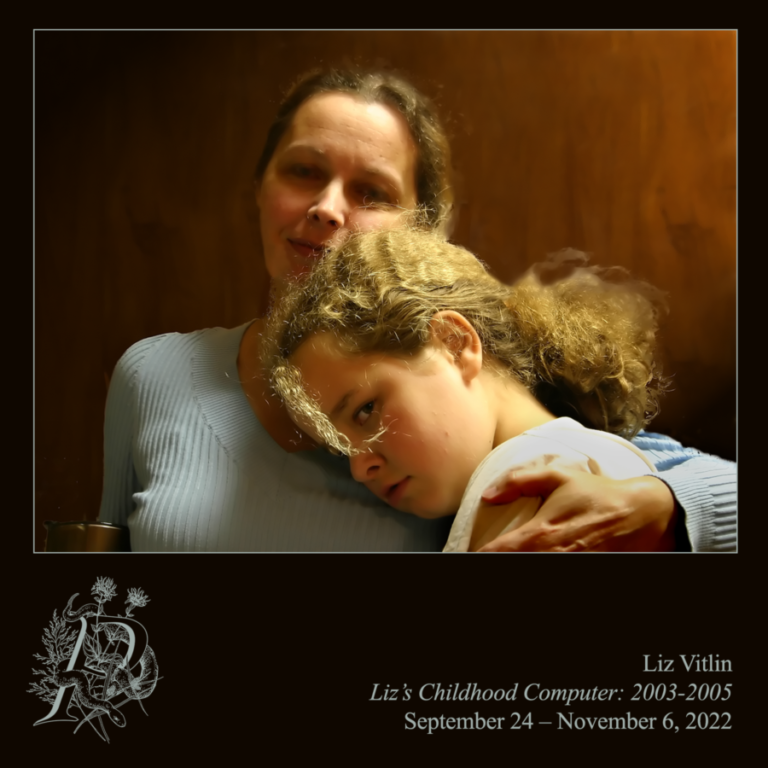