AARON SHAPIRO AT SIDE YARD SOUNDS

Please join us at the Compound Yellow for Side Yard Sounds 2022 featuring the creative music of Aaron Shapiro.

Friday September 2nd at 7PM at #244 Lake Street in Oak Park, IL. This performance will be held outside, space is limited so please come early to reserve your seat! $15 at the door, cash, Venmo and PayPal accepted, proceeds go to the artists! BYOB

Aaron Shapiro is a guitarist and composer who has been a fixture in Chicago’s eclectic music scene since 2010. As a writer and arranger he has composed for a 15-piece big band, a Hammond Organ trio and an album of guitar & vocal duets with singer Mary Lawson. Over the past decade Aaron has led jazz ensembles at many of Chicago’s renowned music venues including Andy’s Jazz Club and The Jazz Showcase. Since 2015 he has played guitar for The Eternals and has also collaborated on recording projects with saxophonist Patrick Bartley and drummer Daru Jones. For Compound Yellow’s Side Yard Sound series, Aaron will be joined by Nate Lepine on tenor sax and John Sutton on bass. They’ll perform two sets of Shapiro’s original compositions interwoven with some choice cover songs. 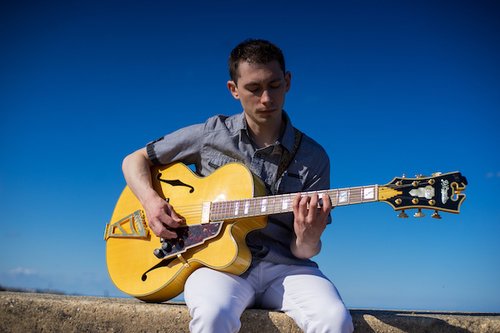