William Schaeuble: Inside Games, Outside Games

On view through Sunday, September 18th

Cats, birds, and the rest of the crew continue on their Schaeublian odyssey and engage in a fierce exploration of space in a spaceless universe, finding plenty of games to play along the way.

A new body of work from William Schaeuble introduces us further to how his characters deal with his logic, how a game of binocular chess is played, and clearly that birds are not reliable members of a choir.

In the hyperflat, Schaeuble reflects on space and time and our experiences of day to day life, finding levity in strange places, inside and out….

William Schaeuble was born and raised in Iowa with one goal and one goal only: to catch the biggest freshwater pond fish in the midwest. But since that is an ongoing
process and might take a while, he started painting naked bald people and dogs with long tails as a way to pass the time. When not found painting, Schaeuble is found
hanging largemouth bass from trees and trying to get birds to land in his hands.

In Chicago, Will approaches painting through a self-documentarian lens; observing and recording the moments of today–as he sees them–so they can be relived tomorrow. Heavily influenced by his surroundings; he documents days spent and games played with his partner, muse, and spiritual advisor Briseis Schreibman, whose substantial presence in the work is not only denoted by a long-bodied lady,
but by some of the ideas themselves.

Will and Briseis both leave Chicago this August, and in separate ways; and so the autobiographical work documents–with some imagination–this pivotal time in both
of their lives. 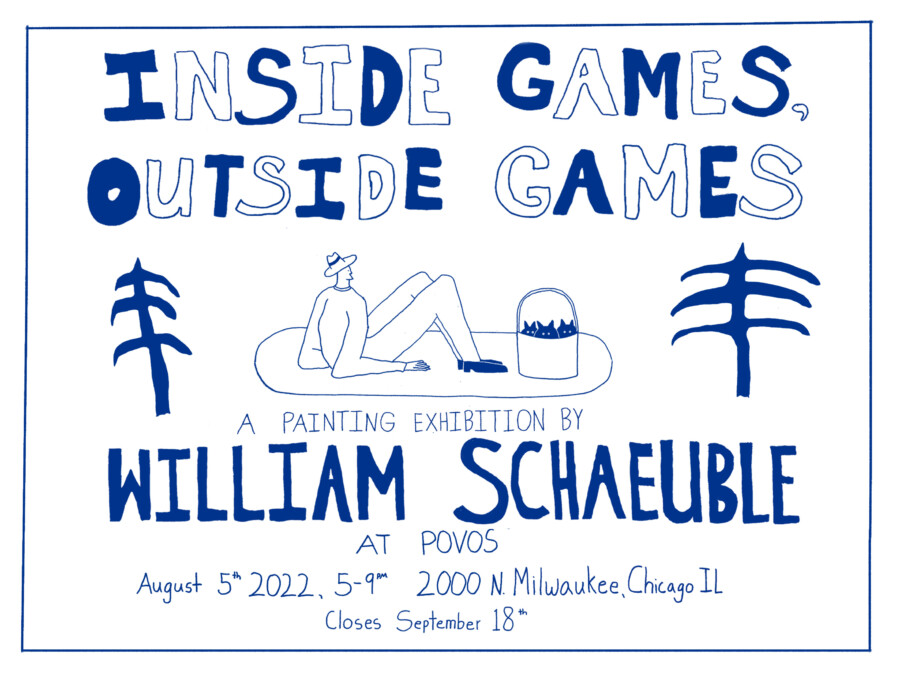