Boz Deseo Garden: Does One Write About an Encounter With Nothing

On view through Sunday, October 2nd

Jargon Projects is proud to present “Does One Write About an Encounter With Nothing,” an exhibition of new works by Boz Deseo Garden. This is Garden’s first solo exhibition in the US as well as their first exhibition with the gallery.

In Does One Write, Boz Deseo Garden presents new photographs, a critical essay, archival documents, and a short film titled “Pale Coast: A Cenotaph.” While the exhibition title paraphrases Saidiya Hartman’s question from her book “Lose Your Mother,” Garden instead departs toward an Afropessimist analysis of archival study, waste incineration, and its ashes.

The works operate from the understanding that the afterlife of Slavery expresses itself metonymically—dispersing its violence and signifiers to every space, both psychic and material, until one cannot tell the difference between what is and is not a substitute for (the ghost of) Slavery. Here, Garden thinks through incineration and ash as material-metonymic expressions of Slavery and its afterlives. By looking at the production of ash from waste incinerators across different histories and contexts in the US (municipal and carceral) and their proximity to Black flesh, Garden argues that ash and Blackness spill into each other in sign, space, and affect. Throughout this work, incinerator ash is both a furnace byproduct and, like Blackness, a phobic object of the World in its collective and necessarily anti-Black unconscious. Ash stands in for more than just incinerated matter but also becomes a locus for the pleasures and anxieties of being/becoming indistinct matter whose history has been evacuated or scorched with no possibility of recovery: of being or becoming the Black/the Slave.

Both the 38 minute film “Pale Coast” and the printed work “Reaper” feature interview/hearing transcripts with Black non-beings who have worked in incinerators. Patricia Decker, a former employee of a Long Beach waste incinerator (SERRF), is the subject of the film’s transcripts. An unnamed prisoner at Folsom State Prison, who operated its incinerator in 1962, is the subject of Reaper’s transcript. Both subjects articulate that their respective experiences are marked by how they function as necessary psychic corridors in the anti-Black imaginations of the State or the World. The takeaway essay, “Drift & Pile,” performs a semiotic analysis of the disposal of Philadelphia’s waste incinerator ash onto Haitian shorelines in 1987, further elaborating how Black flesh is not only marked as the World’s geographic and semiotic refuse dump but is also coerced into overseeing the maintenance of that marking. Together these works, with the accompanying photographs, argue that this spatial and affective spillage between Blackness and ash is one encounter (of many) that produces a blur between Black flesh and the ungrievable object, property with no memory, dead cargo, or a Nothing-matter—a matter that cannot matter.

For Garden, and Afropessimism more broadly, the indistinct Nothing(ness) of Blackness/Slaveness gives the World its meaning and function insofar as it does so through negation and absence. This paraphrases a principal refrain within Afropessimist discourses: There is no Slave in the World, but there is no World without the Slave.

Does One Write engages the potential of an unrelenting analysis of anti-Blackness or the ways anti-Blackness is relentless in the face of analysis and its limitations: its desire to do something with and about Nothing. In that tension, Garden adopts a way of viewing that begins from and arrives at an absence; it is the impossible task of encountering a document that documents Nothing. Which is to say, a document whose subject is the Slave/the Black that might not yet desire freedom from its indistinction. The work proposes that desire transforms enslavement and freedom from distinct destinations into a gradation of intensities. For Garden, the Slave finds itself—with no memory—in a dense fog or ash heap where one can no longer tell the difference between once-distinct objects; where it is unclear where the objects of freedom or captivity begin and end. The twin horrors Garden focuses on are the horrors of being “life”/flesh that has no symbolic conflict with death and property and the horrors of not knowing the difference between getting free and staying in the Hold of the ship—the plantation—the furnace.

Boz Deseo Garden (b. 1997) is an interdisciplinary writer and artist based in Los Angeles, California. They received their BFA from California Institute of the Arts and are an MFA candidate at the University of California Los Angeles. Their writing has appeared in Kandis Williams’ Cassandra Press Zine Series, An Ossuary for the Hunted (2022); presented at UC Irvine’s Comparative Literature Conference, Discourses of the End (2022); and published in the Hammer Museum’s interdisciplinary arts Journal GRAPHITE, Attention/Atencion! (2021). Their work has appeared in group exhibitions at Los Angeles Municipal Art Gallery (Los Angeles, CA, 2020); Photo LA (Los Angeles, CA, 2019); and Public Storage LA (Los Angeles, CA, 2018). Their solo shows will be held at Jargon Projects; Chicago, IL (2022) and Petrine, Paris, FR (2023). They are a Research Scholar at the Young Research Library at UCLA and were a Research Fellow at the James C. Hormel LGBT Center at the San Francisco Public Library (2020).

Tags: Avondale, Boz Deseo Garden, Chicago, Does One Write About an Encounter With Nothing, Irving park, Jargon Projects 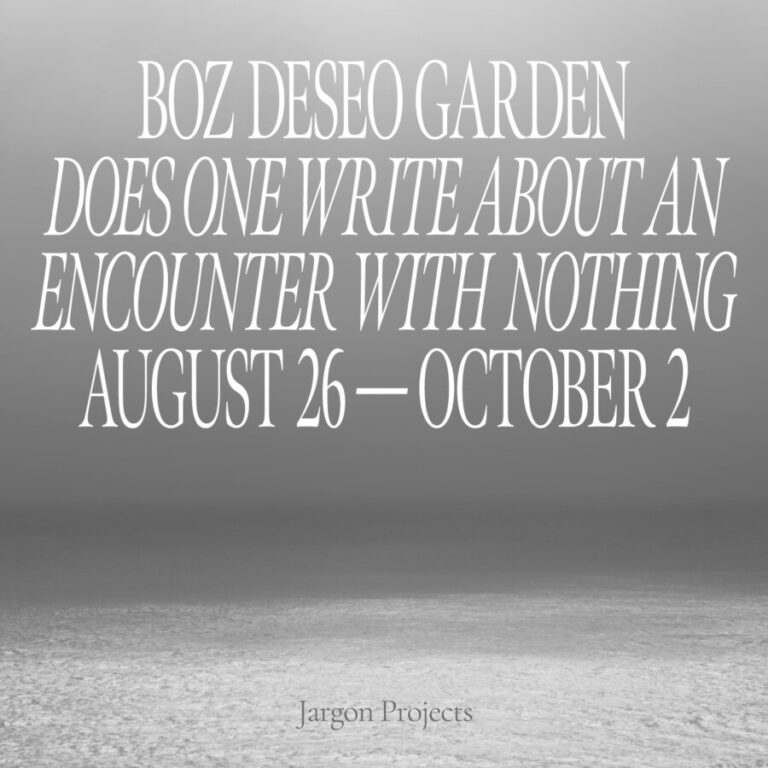