On view through Saturday, September 10th

**When you arrived at the tavern, you expected to have several drinks at the bar before anyone approached you. But only a few moments after being served, you feel a hand resting on your left shoulder, shortly followed by another hand resting on your right. Two cloaked figures stand impressively tall behind you. One speaks:

“…Our happy ending might very well depend on how loudly and how powerfully we tell our stories along the way. Don’t think of fantasy as mere entertainment, then, but as a way to train for reality. It always has been, after all.”

**And then the other:

–Stephen Sondheim. “No One Is Alone.” Into the Woods. Masterworks Broadway, 1987.

**And just like that…you’re somewhere else. You know exactly where you are, actually, but you can’t remember how long it took you to get there. Too long, perhaps. But now you’re at a beginning, and there are trustworthy friends by your side.

RUSCHMAN celebrates late summer and the close of its 2021-2022 season with the group exhibition Into the Woods, featuring a robust selection of artworks by Claire Arctander, Zachary Cahill, Caroline Jacobson, John de Leon Martin, Bonnie Lucas, Ricardo Partida. Bringing together artists working across the United States, at various stages of career, and in a broad range of media, Into the Woods examines the roles fantasy performs in the studio life of artists and in the formation of liberatory alternative structures for a broader society.

**The moment you all take your first step toward this new beginning, the world shifts. Your feel taller than you’ve ever felt, but your line of sight feels far too close to the ground. Colors undulate and shadows shift off in the distance. The blurry faces of your friends in your periphery shift in age, voice, and manner of walking. You know this is the work of spies. You know this is the work of the Character Assassins. Roll for initiative.

In 1991 Edwin Newman interviewed Stephen Sondheim and James Lapine for PBS TV about their recently opened Broadway musical Into the Woods, a pastiche of tropes extracted from fairytales and folklore, arranged into a bizarre yet achingly poignant psychological study of family connections, isolation, and the plight of self determination. Near the start of the interview, composer and lyricist Sondheim describes suggesting to his co-writer that they invent their own “quest-fairytale.” And yet midway through the interview, Newman (and the camera operator) close in on director and book writer Lapine asking about his children and heterosexual family as a kind of hypothetical audience for their work. Subtly, the possibilities of this fantastical, magical forest as an extension of Sondheim’s queer orientation and cultural alienation are shifted out of frame.

**One of the first lessons you learned when you first stepped into the woods was to never split the party. And yet here you are, paired off. How do you want to play this? The rest of the group is…elsewhere. There are forces here that want to split you up even further.

A recent revisiting to Peter Jackson’s initial Lord of the Rings film trilogy called attention to their lead up to the 2003 landmark decision by the Supreme Court to decriminalize homosexual conduct nationwide. A pivot between the focus in the 1990s on “Don’t Ask, Don’t Tell” military policy and an emerging struggle for marriage equality in the US, the always subtextual but trenchantly legible homoerotic content of Jackson’s adaptations of Tolkien’s fantasy novels narrate their own quest for a latent, im/possible queer home life beyond sites of warfare. Innumerable forms of queer romance and coupling are alluded to within the epic dramas, affirmingly progressive however unwittingly.

**Now that the party is back together, you begin to notice that everyone’s roles have changed. Warriors are now Bards. The Paladin is a Necromancer. Somehow, you are still all Druids.

It dismays that all too often, when confronted with the kind of ground-up world-building endemic in the genre of fantasy, most of the fixed hierarchical structures by which identifiers such as gender, sexuality, race, class, and nationality are weaponized into oppressive systems are reinscribed into a set of circumstances that could as easily have proposed a politics organized toward liberation—or at the very least introduce new possible orientations and relationships through which power may be questioned.

**You’ve come across a meadow. This feels like an additional gift bestowed upon your group by the Wicked Jenny Greenteeth (not so wicked, it would seem), who just days ago bestowed you with sparkling trinkets, small animals that ride your shoulders and nest in your pockets, some neat rocks that you aren’t quite sure what they are for yet, and some rather inconspicuous sex toys. It seems like the perfect spot for a rest. That is, until your hear the footsteps and the shouting and scream of egos approaching. Here come the Men. You draw your weapons, arm yourselves with Seduction Magick, call upon all your animal friends, and ready yourselves for their supposed inevitability.

The same can be said for the conduct of many subcultural communities in which fans, nerds, geeks, and special interest groups gather around a shared love for the capacities for projection and reinvention afforded them in this or that sci-fi, fantasy, or otherwise whimsical property, while still trading in the most prosaic expressions of misogyny, racism, and other prejudices.

**The Men have been vanquished. You’ve all gone up a level.

RUSCHMAN’s Into the Woods delves into a realm devised as alternative to these alternatives. Fantasy and fandoms, seances, sylphs, transgressive sex acts, and the steep order of dimension-hopping, prismatic quests populate this gallery-cum-faerie glade. In a summer given form most by rollbacks on federal rights and ancient forests on fire, the fellowship comprising these artists is committed to dreaming fiercely—recovering the abject and taboo, monstrous and invisible, repressed and retrograde in pursuit of a multiverse-metaverse that sees hegemonic power topple, overtaken by witchy wilds.

**You’ve been walking through the thicket for days it seems. But suddenly, open air and dusklight. You’ve made it. The celebration of your party’s many victories and triumphs is one of those all-to-rare joyful memories that will outlast those pesky painful ones that always want to stick around longer than they are invited to. You feel rested. You feel antsy. The next morning, you find yourselves back at the forest entrance.

In Claire Arctander’s video work Why Have There Been No Great Women Magicians?, art historian Linda Nochlin’s 1971 essay that advances a feminist critique of systemic and institutional obstacles for women artists is nodded to in a playfully performative magic act that enlists Arctander’s intimates as well as the ejaculatory sculptures of Lynda Benglis into a rebus-incantation for a more advanced femme future consciousness. Unicorn and Death feature in the buddy road trip narrative that Zachary Cahill excerpts in sumptuous, shimmering visions inscribed into paintings on paper. Britney and the python. Paris and her chihuahua. Barbra and her three generations of clones of Samantha, the Coton du Tulear doggie. Following upon these dynamic duos, Caroline Jacobson casts a Circe spell onto these collisions of animal and celebrity. The results are unlikely effigies, elaborate altars, and mesmerizing tableau that probe into the allure of cuteness, ornament, and conventions of femininity. Likewise, Bonnie Lucas’ paintings in oil and gouache compliment her assemblages currently on view in a solo presentation at RUSCHMAN’s sister-satellite space RUSCHWOMAN; Lucas’ fantasy realms are populated with delicately tinted, deranged dolls, high femme fables, and uneasy fairytale illustrations. John de Leon Martin’s creative practice transfigures overlapping and disparate nerd cultures: performances as Wonder Woman, hand drawn inventories of Pokémon, and hosting the beloved comics podcast Super Gay! are just a few of the projects that presage his group of paintings on view at RUSCHMAN, which draw inspiration from gay porn and video gaymer cultures. And Ricardo Partida stages elaborate roleplaying onto sensitively rendered canvases that intermix references to classical painting and thirst trap digi-culture. Taking up Lacan’s configuration of fantasy as a compensation for the wincing combination of lack and desire each subject must confront, it is the work of these and other storytellers that will fill in those lost and contested fields of political and cultural representation. 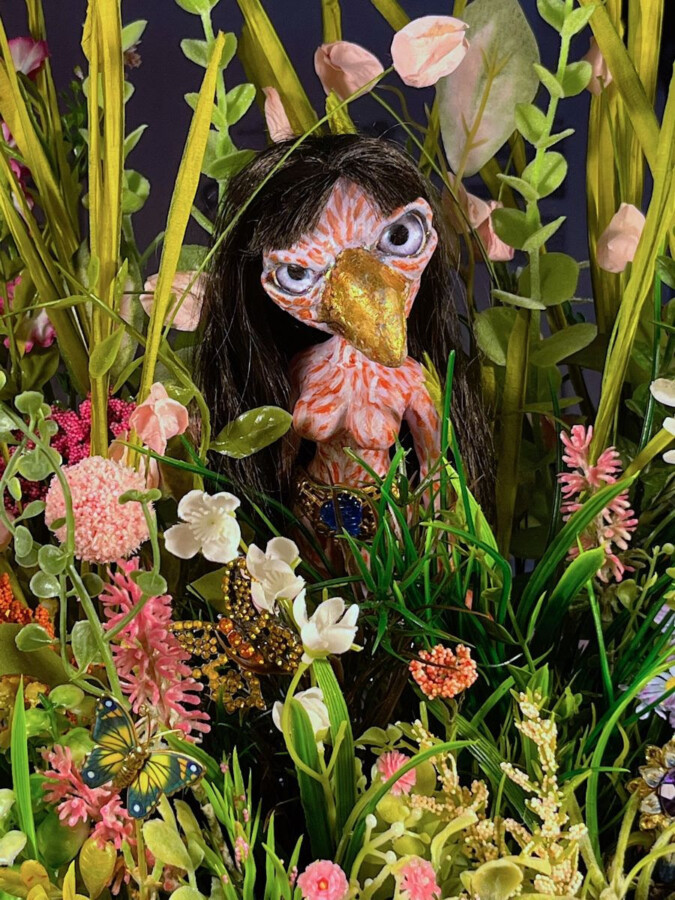