The Riverside Arts Center is pleased to announce the opening of Endless, an outdoor installation by Darrell Roberts in the sculpture garden combining his art with his love of plants, curated by Camille Silverman

Endless brings together Darrell Roberts’ decades-long explorations of material fascination with his delight in the complexity of how he might move his fellow beings through a forever continuum of walking through a garden. Watching how things unfold in time and space is how he moves through his home studio and his Chicago pedestrian lifestyle, making his work more an extension of seeing rather than just a preoccupation with making. It is a way of seeing that is gifted to those who go through life without the dependency of a car, the ability to notice though walking, a taking it all in through the senses, being a part of it all as it reveals itself.

This artistic process began through the daily ritual of collecting scraps and photography studies in and around his old studio in the Roscoe Village area of Chicago. In 2015 he began moving over a hundred living plants into his studio transforming his work space into an area dominated by plants that one would have to hop and climb around to fully understand the working installation. They were both an integral part of the work and a bit of an obstacle to experiencing it. Not only that, but maintaining the living plant system became a part of the whole installation. There of course is an ever present wonder in his built environments, but also the absurdity of the excessive abundance.

His knowledge of coupling plants with his other artworks was fueled by his years of working as a painter and his seasonal employment by various rooftop gardeners and landscapers. It became a natural extension of his studio practice to begin to incorporate what was going on in his daily life as a plant designer into his studio installations. Living forms began moving into his growing sculptures, paintings and installations. Like a creative state with no rules or regulations, curiosity and wonder over took his practice.

The jungle of his studio will be moved into the everchanging environment of the outdoors and incorporate all that lives in these spaces; birds, insects, and whatever wanders in from the Riverside forests. This will be the first large scale outdoor installation of Darrell’s career.
– Camille Silverman, curator

Darrell Roberts is best known for his abstractions full of color and texture. His paintings have been exhibited internationally in Spain, China, India and throughout the United States where he is represented by Thomas McCormick Gallery in Chicago. He has received grants from the Dedalus Foundation, George Sugarman Foundation, Ludwig Vogelstein Foundation, Tanne Foundation, Artist Relief Grant, DCASE Creative Workers Assistance Grant, and Back to Work City of Chicago Grant

Roberts completed his BFA and MFA at The School of The Art Institute of Chicago, holds a BA in Art History from the University of Northern Iowa, participated in the Leon Levy Expedition in Ashkelon, Israel for archaeology, and has participated in artist residencies in Johnson; Vermont, Delhi; India, Kushtia; Bangladesh, Beijing; China and Cadiz, Spain.
https://www.instagram.com/darrellrobertspaintings/

Camille Silverman is an artist and curator living in the Belmont Cragin area of Chicago. She received her MFA from Cranbrook Art Academy. Her paintings and installations have been exhibited in Chicago, New York, Dallas, Denver, as well as internationally. Her art has been featured in Studio Visit Magazine, Chicago Voyager and New American Paintings, Midwest.

Silverman has worked for nonprofits as a curator and executive director at the Western Colorado Center for the Arts in Grand Junction, CO and for the Riverside Arts Center in the greater Chicago area. She has curated and participated as an artist in the international Terrain Biennial Outdoor Exhibitions and in 2021 curated Proposals and Speculations, part of the Chicago Architecture Biennial. 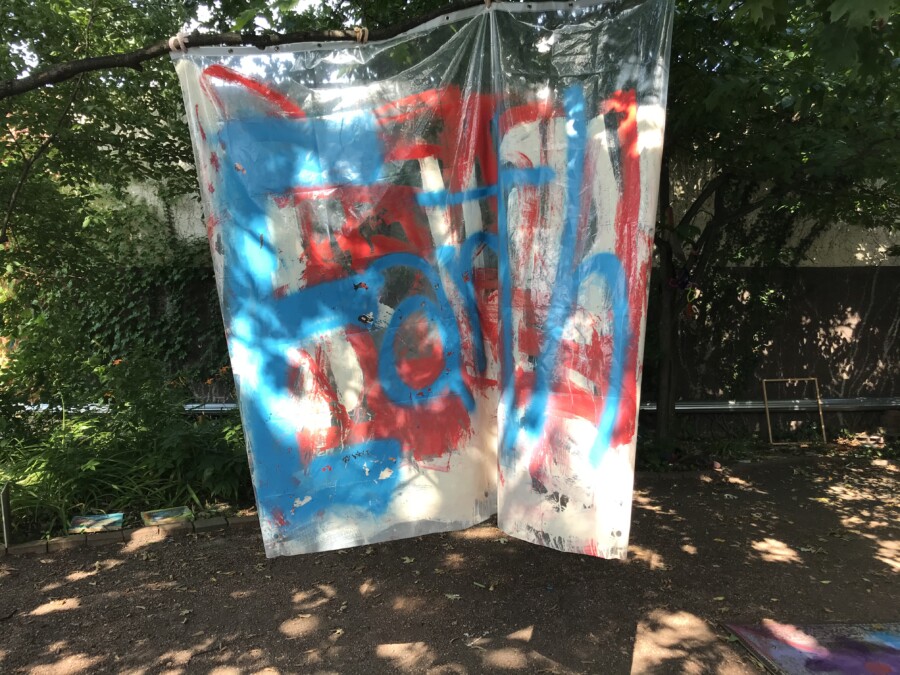