“That people, even more than things, lost their boundaries and overflowed into shapelessness is what most frightened her.”

― Elena Ferrante, The Story of a New Name

Hearts, Concealed by Madeleine Finley at ADDS DONNA offers a view into the artist’s oeuvre, built outside the grand gestures of abstraction and figuration. Born in San Francisco, Finley moved to Maryland, Washington at the tender age of twelve. Growing up observing the careful handiwork of her father, a draftsman for American Terrazzo, Finley’s abstractions are environs, poetic images that emerge from the mist of life, love, and longing. Seemingly automatist, Finley layers oil paint, gesso, and concrete amongst other materials, testing their material subjectivity only to later elicit forms and textures through the process of removal. Drawing forth the relationship between abstraction and post-punk representation, Finley carefully negotiates acts of destruction and renovation, something she relates to growing up in a 3-flat under constant repair.

In Hearts, Concealed – Carved, Finley blankets an entire canvas with layers of charcoal gray, black hieroglyphics, and thick white emulsion paint. Chipping away at layers, moving along the cracks that radiate on the surface, an opening or compositional form emerges. What was background is foreground, the rupture; now subject. A bandaid of white emulsion adheres to a red scab on the upper left corner. On the lower right, emotive finger painted strokes evoke a spray. The diaristic intimacy of the artist’s reality plays off notions of interior and exterior time. Finley’s interest in feeling and thinking about feelings exposes the vulnerability of her process, bringing her hands and fingernails to the surface in the relentless act of scratching away. The paintings are material experiments, not idiosyncratic events, that provide abstract views of the artist’s innermost world.

In the series Hearts, Concealed, Finley depends on the natural color palette of building materials to create depth of field. From cryptic scrawlings in hot pink construction marker, to sombre washes of sealed concrete, each material makes an appearance as a symbol in the continuum of the artists imagination. Finley’s admiration for Kandinsky, Tàpies, and Clemente inform her abstractions, while more compositional elements find their relationship to Morandi and Diebenkorn. “I like to think about dividing my paintings into quadrants. It’s similar to urban architecture in the treatment of space.’ Building surfaces that spatially rise and rupture, the material fragmentation of each painting results in a skin, a metaphor for the body. Starkly divergent from earlier works that expressed more environmental subject matter, the series reads as an obstructed view from a period of self-containment. As works ground themselves in a material reality, Finley’s relationship to the history of abstraction and representation lie in direct relationship with her affinity for the ingenious and emotional aspects of image making.

An eroded memory of an Italian quarter unveils itself in a concrete window frame in Hearts, Concealed – Carved II. Hearts, Concealed – Laying in Conversation and Hearts, Concealed – Clinking with Conversation are identically sized, ostensible windows in an architectural scheme that open out-into and seal-off the world outside. Washes of concrete gravel and oil paint mingle, suspending the delectation of a hand raising a glass of champagne. To the right, stark black strokes divide a deteriorating white plane. In the background, a hot pink line squiggles mock any modernist interpretation, employing repetition as a tool for deliberation. Finley’s disarming negation of representational markers is fortified by her exploration of surfaces, like a well-kept secret between maker and material, demanding the audience remain susceptible, or at least trust her, beyond mere appearances.

Two large paintings sit across one another, holding together the interiority of a home. Hearts, Concealed – Picnic invokes a sense of timeless spatiality. Hot pink stars obscured by broad strokes of concrete meet gestural shadows that emerge at a horizon line. Finley’s compositions are additive- they pace in and out, move back and forth, drag up, down and away, until the strokes move the eye in all four directions, suggesting their contingency on and against gravity. The intentional ambiguity of gesture accentuates the truth of an impassioned temperamentality. At the left edge, a cerulean blue underpainting pools, a hint of atmospheric presence that can only be reached through seasoned technical skill. An entire cosmos graffitied over, obfuscated by the tender experience of loneliness over the course of a pandemic. What is concealed is a study of the artists process through material. What is revealed is intentional at time times, incidental at others, similar to the reframing of language in the act of translation.

Directly across and almost mirrored in scale, Hearts, Concealed – V, combines cross-hatched horizontal brush strokes with large vertical textural planes. The indirect anthropomorphization of desire is central to Finley’s subject matter, “I consider them as scattered non-linear memories” she says, “they’re fragile, interrupted mental trajectories.” Visiting Rome to study plein air painting in her mid-twenties, Finley’s landscapes provoke an atmosphere of a historic place without directly taking you there. Resisting the traditional limits of abstract painting and drawing, she supplants the precision of her father’s hand with unfinished lines, tracks of dried tears, of unfulfilled trajectories. The temporality of trace and removal of it conceals any direct statement by the artist. “I interrupt the process (of painting) by slowly building the surface and then scratching away. Creating and destroying to some degree each time.” Describing them as carvings, it is clear the works are relational compositions rather than paintings or sculptures in the pursuit of uncertainty.

Hearts, Concealed is the aftermath of an affair gone awry, the calm post a manic episode, and a longing for a lover you no longer recognize. It is the grief that emerges from the background of our collective consciousness after three years of loss, longing, and separation. Finley’s interpretation of the personal is at once poetic and metaphysical through its materiality where incomplete shapes, surfaces and symbols require deep looking. Pulling from sources that precede her own, Finley seeks not to necessarily free herself from source, but rather to accumulate it, to build with it and become complicit with her own experience of the world.

The consciousness of pedestrians, voices of strangers and caress of soul mates etch themselves into the walls, windows and cast concrete of our lives. They speak to us intimately, softly, yet akin to a distant lover, obscure themselves in the brick and mortar of our own consciousness. 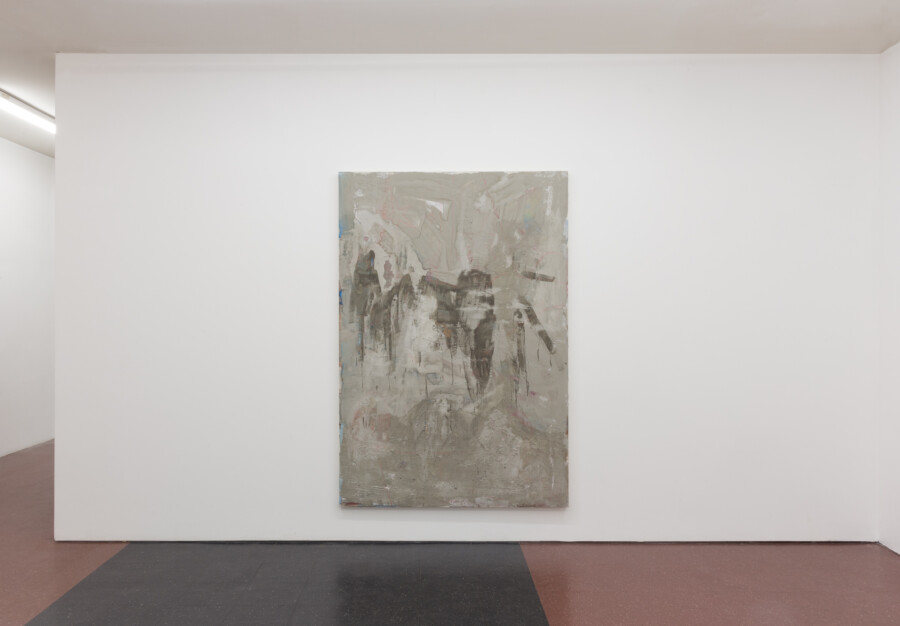