Screened in conjunction with Diane Severin Nguyen’s exhibition IF REVOLUTION IS A SICKNESS, Vincent Meessen’s film, in its own ways explores revolutionary aspirations, the echoes of past films, and the response of a new generation to the traces of lingering ideologies.

Juste un Mouvement, 2021 is Meessen’s take on La Chinoise, a Jean-Luc Godard movie shot in 1967 Paris. Godard’s original film followed a group of French students who embrace revolutionary ideals and eventually turn to violence. Updating its plot and reallocating its roles, Meessen places the characters fifty years later in Dakar, creating a new version that offers a meditation on the relationship between politics, justice, and memory. In this revision, Omar Blondin Diop, the only actual Maoist student appearing in Godard’s original film, becomes the key character.

In a further parallel with the exhibition on view, both Nguyen and Meessen shot exclusively with non-professional actors, making films in which everyone in effect performs themselves.

IF REVOLUTION IS A SICKNESS marks Diane Severin Nguyen’s first one-person museum exhibition. The show, co-organized with SculptureCenter, New York, presents a newly-commissioned 19-minute video of the same title and four photographs in a total installation resembling a theater and its backstage.

Set in Warsaw, Poland, the film loosely follows the character of an orphaned Vietnamese child who grows up to be absorbed into a South Korean pop-inspired dance group. Widely popular within a Polish youth subculture, K-pop is used by the artist as a vernacular material to trace a relationship between Eastern Europe and Asia with roots in Cold War allegiances. Spilling over from first-person narrative into near-abstraction and pop music video, Nguyen traverses the complicated beauty and multivalent forms of propaganda that underpin cultural (and self) image making.

Nguyen found—realized—her film’s protagonist on Instagram by searching for a combination of a common Polish name for girls with her own Vietnamese surname. Weronika Nguyen thus becomes an emblem, or even a muse, embodying the complex diasporic history between Poland and Vietnam. Of the significant Vietnamese diaspora currently living in Poland, they are divided by Northerners who migrated before the fall of the Iron Curtain, and Southerners who came in the aftermath of the Vietnam War. Weronika’s character is both alienated and subsumed; her conflicted desires speak to the contradictions of finding shared symbols and naming oneself from within another’s regime.

Projected into the pomp of a red and yellow stage, Nguyen’s video probes the paradoxes inherent to the artist’s distinctive approach to making photographs. Installed in a backstage-like corridor through which the viewer first enters the space, the photographs offer an amorphous passage into the show itself, probing the question: Can true self-realization take place within the unifying spaces of narrative and representation? Central to both Nguyen’s moving image and photographic work is the question of how the self takes form (both assimilating and rebelling) in relationship to media, and mediums, with which we represent ourselves.

For the project, Nguyen assembled a crew of teenaged Polish dancers who perform original choreography set to music and lyrics co-written by the artist. By arranging these trained bodies, who are invited to “lose themselves to the new image,” as Nguyen’s lyrics suggest, into movements of militaristic perfection, the artist considers both the dramatization and the erasure of personal traumas in the process of building personal identity–and the formation of a shared nation space.

The melodramatic pull of the spectacle is disrupted by the voice over culled from various and often contradictory writings on revolution by Ulrike Meinhof, Hanna Arendt, Mao Zendong among others. The text and the image function on two different registers and not in the service of one another. The work uses this internal tension and shows how a single entity could be used for potentially diametrically opposed ends. Propaganda or blockbuster, self-actualization or commodification, asceticism or exuberance. 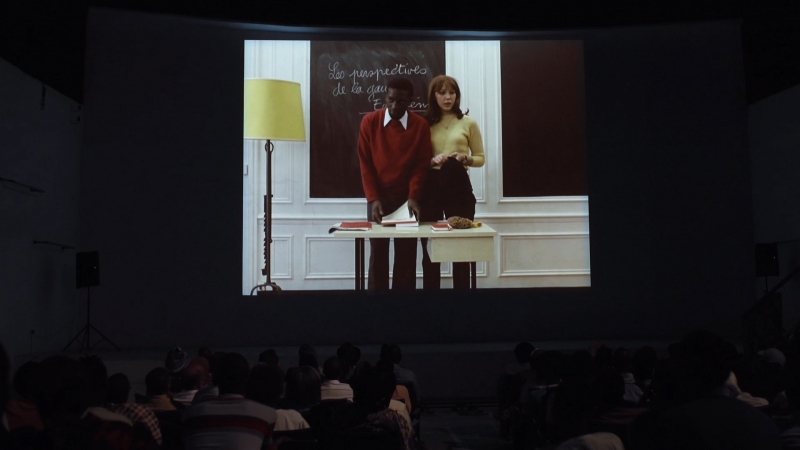