The Guild Complex presents Exhibit B

Join us on Thursday, May 26th, as The Guild Complex presents Exhibit B at The Chicago Mosaic School for an evening of performances from Courtney Cook, Alex Wells Shapiro, S. Yarberry, and the 2020 Chicago Youth Poet Laureate Nué.
Exhibit B is a performance series that highlights exciting text-based work in Chicago. Presented by the Guild Literary Complex, a 30-year-old grassroots literary arts organization based in Chicago, Exhibit B showcases prose, poetry, plays, music, and more. We want to create a space that showcases work that you don’t need an MFA to feel and that leaves the audience always wanting more. We want community. We want impact.

Artist Bios:
Courtney Cook is a writer, illustrator, teacher, and mental health advocate. Her debut graphic memoir, The Way She Feels: My Life on the Borderline in Pictures and Pieces, was released by Tin House in June of 2021 and has received praise from the literary and mental health communities alike. This praise includes being awarded a starred review from Kirkus, named a Book Riot Best Book of the Year, selected as a July 2021 Indie Next Pick, and is currently a Lambda Literary Award Finalist for Bisexual Nonfiction. Courtney’s writing has been published by outlets such as TIME, The Guardian, The Rumpus, Hobart, Lunch Ticket, and Split Lip Magazine. She received her BA from the University of Michigan and MFA from the University of California, Riverside. Courtney lives in Chicago and teaches creative writing from her living room with the help of her senior cat, Bertie.

S. Yarberry is a trans poet and writer. Their poetry has appeared in AGNI, Tin House, Indiana Review, Redivider, jubilat, Notre Dame Review, The Boiler, among others. Their other writings can be found in Annulet: A Journal of Poetics, Bomb Magazine, The Adroit Journal, and Blake/An Illustrated Quarterly. They currently serve as the Poetry Editor of The Spectacle. S. has their MFA in Poetry from Washington University in St. Louis and is now a PhD candidate in Poetry & Poetics at Northwestern University. Their first book, A Boy in the City, is forthcoming from Deep Vellum.

Nué is a Blk queer artist from the far south side of Chicago where they call The Hunnids home. They were deemed Chicago’s 2020 Youth Poet Laureate and have had their work featured on many reputable platforms such as The Aids Foundation Chicago, BBC Radio, and Nike. Their work has also been performed on the stages of Pitchfork’s Music Festival, Windy City Live, Newberry Library, Driehaus museum, Wndr Museum, and Young Chicago Authors’ Louder Than A Bomb poetry festival in which they won in 2020 as an individual.
They were a two time participant in the Bomb Squad internship and a current participant of YCA’s Next Gen apprenticeship. Nué’s poetry journeys through self discovery in a coming of age fashion where accountability prohibits them from being centered as a hero in their stories. Their poetry is offered as an invitation to accompany them in interrogating their truths.

Alex Wells Shapiro graduated from the School of the Art Institute of Chicago in 2017 with an MFA in Writing. He reads submissions for Frontier Poetry and Another Chicago Magazine, and co-curates Exhibit B: A Reading Series presented by the Guild Literary Complex. His debut full-length poetry collection is forthcoming with Unbound Edition Press in 2022 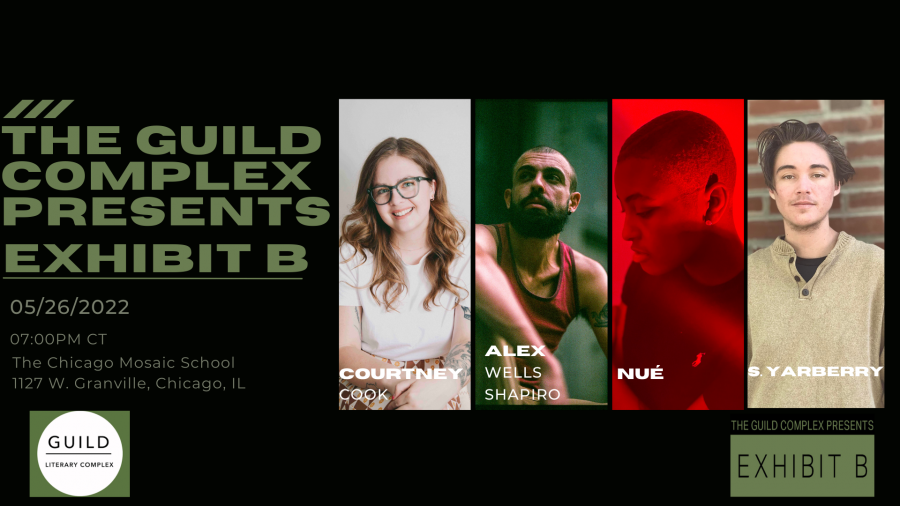