“Mina” translates to mine in Spanish, a place to find treasures. Artist Natalia Villanueva Linares uses Mina as a matter of silence. She encountered the matter in a dream while studying at Beaux Arts in Paris, she proceeded to make an installation filling a room with mud, intentionally placing a large bell in the center of the room. The fertile symbolism of one welcomed the ritualistic symbolism of the other. As if the body of the bell was our own, two identical feels were given to us: to be held by the mud (and)or producing it. We experienced the piece from the entrance, we could breathe the water uniting the dirt, it was a scent and a moment that called forth a silent reverence.

Natalia extracted the gesture of this installation with her Brick of Mina (2013), mixing rain water with dirt collected from around the Hale Memorial Church in Peoria IL, at the time her studio was in the church. Natalia speaks in amounts and believes in poetry made from excessive quantities, in simple objects radiating with power over her everything. She began collecting jars with rain water and drying dirt to make small bricks: the elements for three different installations, each, part of a formulation to make sacred bricks.

Mina has an evolutive spirit, Part I of the tripartite installation, was presented in 2017 at the Riverfront Museum for the first time. Part I consists of hundreds of small plastic bags filled with a similar amount of dirt, each containing in the middle, a small golden bell. Natalia has a craving for filling spaces with abundance through different approaches. Comfort Station is giving us the opportunity to experience a new dimension of Mina, accompanied by different objects placed throughout the gallery. These include: the first Brick of Mina, a photograph made by the artist Skyler J. Edwards (2018), which Natalia calls “an artwork of an artwork”. Mina will cover all the walls to envelope the space…us.

Part III: Often related to a guiding sound to gather people, the golden bells will be hidden inside the bricks, elevating the object to a protective envelope of eternal silence.

*****The bags will be reused and then transformed 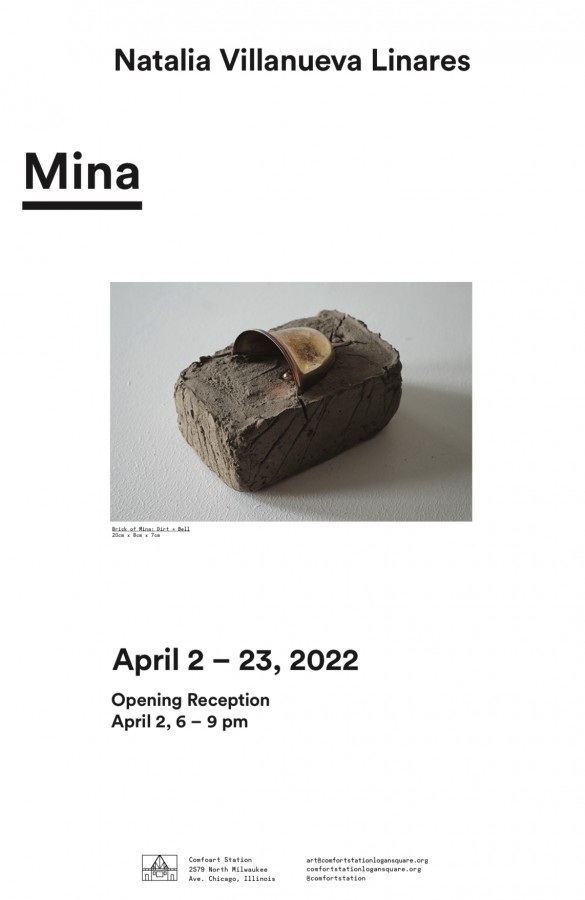