On view through Sunday, June 12th

Apparatus is pleased to announce a two-person exhibition with Elena Ailes & Antonio López: Maw, taking place in the Midland Building from April 09 to June 12, 2022.
For this exhibition, Ailes and López will be presenting new works across painting, photography, sculpture, and video all in the service of tracing the distinct edge formed by a collision of two voids – a void that gives and another that takes – when anything can happen and one no longer knows the direction to be thrown. Inhabiting the near future from which nothing human is presumed to escape, Ailes and López plumb the loss of “humanity” as an inhabitable category for producing fulfilling forms life. In the face of loss, annihilation, and extinction, their work take on the inhuman character of the melancholic, the one whose most horrible understanding of the Real allows them to see reality as an incomprehensible thing cutting the gap between objects and their meanings.

Meeting in compacted layers between the organic and inorganic, stray materials from each rush to fill the gaps their counterparts have neglected to find, which instead of producing a whole proceeds to atomize a growing number of gaps. It is the moment of collision that a kind of animal silence overtakes the objects assembled, thought signified only by the accumulation of drool or black bile that spilling out the mouth – choking out any kind of symbolic meaning, but distilling a singular sensibility into the world. Ailes and López both desubjectivate themselves by removing the “I” from their formal and intellectual equations. Their objects are indifferent to their makers as well as to themselves, this removal blunts easy recuperation of their work as it seeks to create new flows and fonts of somethings out of nothing, a circadian process that can be likened to humoral medicines interpretation of the spleen as an organ who produces melancholy through an overproduction of black bile or induce ecstatic mania through its evacuation. Seized by spleen the poet is both thrown into indifference towards the world and overcome with the need to draw meaning and intensity from the void by hurling a flowerpot through a windowpane while preaching “Make life beautiful!”

Antonio López (b.1993, Quito, ECU) is an artist and curator interested in the human world in relation to the non-human, the construction of our memory and how it traverses (and is traversed by) the spaces we construct, as well as the ideological grounds we endorse or condemn. He holds a BFA from the School of the Art Institute of Chicago and co-directs New Works, an exhibition space in Chicago. In 2019 he founded Nave, an international residency program based in Ecuador. He is currently based in Frankfurt attending Städelschule as part of Monika Baer’s class.

Elena Ailes (b. Albuquerque, NM) is concerned with the encounters, intimacies and discordances found between human and non-human worlds. She has presented texts, videos and installations widely, past exhibitions include SculptureCenter (New York), the Harvard Graduate School of Design (Cambridge), Randy Alexander Gallery (Chicago), Sector2337 (Chicago), and 4th Ward Project Space (Chicago.) She received her MFA in Sculpture and MA in Visual and Critical Studies from School of the Art Institute of Chicago. She is interested in that which makes her a better person and a worse person, especially in theory. In reality, she is an artist and writer living and working in Chicago, and currently teaches at SAIC. 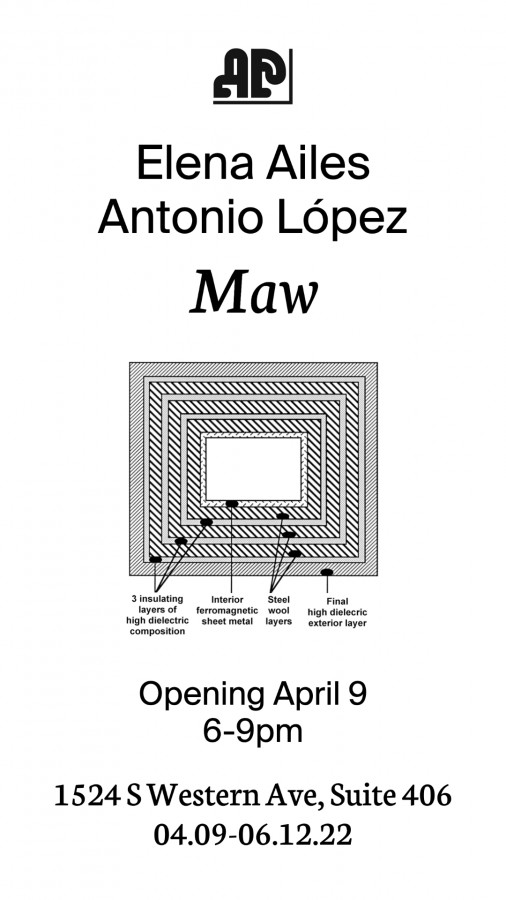