Author Reading: America, Goddam: Violence, Black Women, and the Struggle for Justice by Treva B. Lindsey

Join us for our first in-person in-store event in more than two years! We are honored to host Treva B. Lindsey in conversation with Barbara Ransby for a celebration of America, Goddam: Violence, Black Women, and the Struggle for Justice.

Registration, proof of vaccination, and masks are required for this event. Doors open at 6:30 p.m. The event will begin at 7 p.m. This event will be recorded and recording will be available on our YouTube Channel after the event.

A powerful account of violence against Black women and girls in the United States and their fight for liberation.

Combining history, theory, and memoir, America, Goddam renders visible the gender dynamics of anti-Black violence. Black women and girls occupy a unique status of vulnerability to harm and death, while the circumstances and traumas of this violence go underreported and understudied. Lindsey also shows that the sanctity of life and liberty for Black men has been a galvanizing rallying cry within Black freedom movements. But Black women—who have been both victims of anti-Black violence as well as frontline participants in it, and quite often architects of these freedom movements—are rarely the focus. Black women have led movements demanding justice for Breonna Taylor, Sandra Bland, Toyin Salau, Riah Milton, Aiyana Stanley-Jones, and countless other Black women and girls whose lives have been curtailed by numerous forms of violence. Across generations and centuries, their refusal to remain silent about violence against them led many to envisioning and building toward Black liberation through organizing and radical politics. Echoing the energy of Nina Simone’s searing protest song that inspired the title, America, Goddam is a call to action in our collective journey toward just futures.

Treva B. Lindsey is Associate Professor in the Women’s, Gender, and Sexuality Studies Department at Ohio State University and founder of the Transformative Black Feminism(s) Initiative in Columbus, Ohio.

Barbara Ransby is a MacArthur Endowed Chair and Professor of History, Gender and Women’s Studies, and Black Studies at University of Illinois at Chicago where she directs the Social Justice Initiative. She is also the Editor in Chief of Souls: A Critical Journal of Black Politics, Culture and Society, and author of three books, including the award winning, Ella Baker and the Black Freedom Movement. Dr. Ransby is a longtime Black feminist activist, author and scholar, and has received numerous awards and recognitions for her work including the Angela Y. Davis award and Freedom Scholars Award. She publishes regularly in various scholarly and popular venues and is past president of the National Women’s Studies Association (2016-2018). Dr. Ransby’s current community engagement practice includes work with Scholars for Social Justice, The Rising Majority and the Movement for Black Lives.

Image Description: A silver banner with a faint leaf pattern featuring a photograph of author Treva B. Lindsey smiling in front of a colorful mural. Beside the photograph is text that reads: Women & Children First presents an in-person event TREVA B. LINDSEY in conversation with BARBARA RANSBY Saturday, April 16 at 7 p.m. CT. Registration & Proof of Vaccaination Required. To the right of the text is the book cover image for AMERICA, GODDAM featuring the title in a yellow font and an illustration of two Black femme faces behind a red and white pattern. 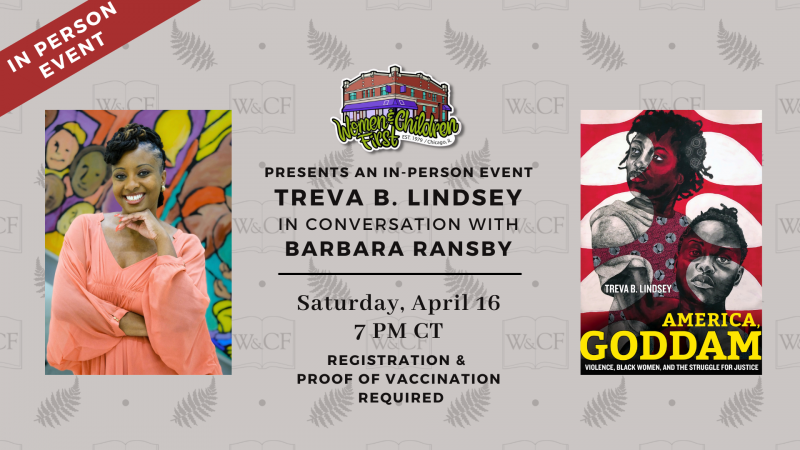