Devening Projects invites you to the opening of “You must go on. I can’t go on. I’ll go on.” featuring work by Samuel Beckett, Hanne Darboven, Allan McCollum and David Moreno. Organized by Clayton Press and Gregory Linn. The exhibition opens on Sunday, March 13 from 3 – 5 pm and continues until April 23, 2022.

Two works by Samuel Beckett—his 1953 novel The Unnamable (L’Innommable) and his 1981 teleplay Quadrat I + II—are the heart of this exhibition.

The exhibition’s title is a direct appropriation of the concluding words in Beckett’s book. The novel is a search by an unnamable narrator to define and name oneself. Based on the undecidability and indecipherability of meanings and intentions, the book is a constant oscillation—a push pull—between the positive and negative: “You must go on. I can’t go on. I’ll go on.”

Quad (Quad I + II) is Beckett’s abstract play for four dancers and instrumentalists. First performed live in 1981 on German television, the performers ritualistically trace the outlines of two squares. Quad is repetitive, ambiguous, and pointedly “pointless.” Following a pre-determined, coded process of repetitive patterns, the dancers move to metronome-like drumming. Beckett’s choreography is fixed, yet each dancer’s movements are transient, imperfect. Each circumambulation of the stage, as well as each diagonal crossing, tempts chance missteps, defying Beckett’s patterns. Both of Samuel Beckett’s works are points of comparison for the other three artists’ use of patterns, seriality, repetition, endlessness, systems, and change, reflecting not only artistic interests, but also obsessions that are personal and revealing.

Hanne Darboven. Ein Jahr (1970, 2007), a silkscreen print, is an iconic number construction that marks “a process of continuation—a process which takes time to do, which takes time as one of its subjects, and which takes from time (the calendar) its numerical foundations.” Her work is multi-directional—expanding and contracting, circular and changeable.

Allan McCollum’s two installations are conceptualizations that use reproduction and seriality. The Shapes Project, which he began in 2005, uses a basic computer graphic program that results in 31 billion unique, albeit highly nuanced, shapes. The second work, The Writer’s Daughter, emerged from a two-year-old child’s attempts to imitate her parent’s handwriting, which led to the artist’s contemplation of written language and its meanings.

David Moreno’s project, You Can Always Choose Your Own Face, consists of 243 unique hand-painted, framed images which follow a near-musical formula of theme and variation. The commonality in this potentially endless series are two eyes and a mouth, resulting in works that do not and should not look alike.

Wolfgang Iser, a German literary critic observed, “The moment one tries to restrict [Beckett’s texts] to a specific meaning they slide away in a new direction.”; so it is with the art in this exhibition. In a sense, the exhibition expands upon the opening words of The Unnamable:

Where now? Who now? When now? … Keep going, going on, call that going, call that on.

Samuel Beckett was born in Dublin, Ireland in 1906 and died in Paris in 1989; he was an author, critic, playwright and winner of the Nobel Prize for Literature in 1969. He wrote in both French and English and is perhaps best known for his plays, especially En attendant Godot (1952; Waiting for Godot).

Hanne Darboven was a German conceptual artist whose ambitious installations probed issues of documentation and archiving societal and biographical depths. Born on April 29, 1941 in Munich, Germany, she grew up the heir to a successful coffee company and went on to study painting at the Hochschule für bildende Künste in Hamburg from 1962–1966. It was during the late 1960s that Darboven developed her personalized language of lines and numbers. Also a trained pianist, she composed a number of compositions based on the calendar. The artist lived between Germany and New York from the 1960s until her death on March 9, 2009 in Hamburg, Germany. Darboven’s works are held in the collections of the Dia in New York, the Tate Gallery in London, the National Gallery of Art in Washington D.C., and the Migros Museum in Zurich, among many others others.

Over the past 50 years, Allan McCollum has explored how objects achieve public and personal meaning in a world caught up in the contradictions we make between unique handmade artworks and objects of mass production, focusing recently on collaborations with regional communities and historical societies in different parts of the world. Since 1970 when had his first solo show with Nicholas Wilder Gallery in Los Angeles, to February 2022 when he presented his fourth solo show with Petzel Gallery in New York, McCollum has actively presented his conceptual and pictorial concerns in numerous international museum and gallery exhibitions.

Born in Los Angeles in 1957, David Moreno has had numerous solo and group exhibitions beginning with his first solo show at Feature Inc. in New York. Moreno was represented by Feature Inc. from 1989 until closing in 2014. His work has been in gallery and museum exhibitions in the US and internationally, including The Museum of Modern Art, New York, The Hara Museum, Japan and The Wilhelm-Hack Museum, Germany. He was included in the 2005 Greater New York at PS1, 2012 São Paulo Biennial and 2013 Istanbul Biennial. Moreno received his BFA at the University of Arizona where he studied with visiting professor, Jürgen Partenheimer. Moreno was in the Masters program at CalArts where he studied with John Baldessari, Michael Asher and Doug Huebler. He is the recipient of the Tiffany Foundation award and the American Academy of Arts and Letters, purchase award. Moreno lives and works in Brooklyn, New York.

Devening Projects wishes to thank Petzel Gallery, The Booth School of Business at the University of Chicago and Sprüth Magers for their generous loans to this exhibition. Our thanks also go to Clayton Press and Gregory Linn whose expertise in the nuanced history of modern and contemporary art forms the heart of this sensitively organized exhibition. 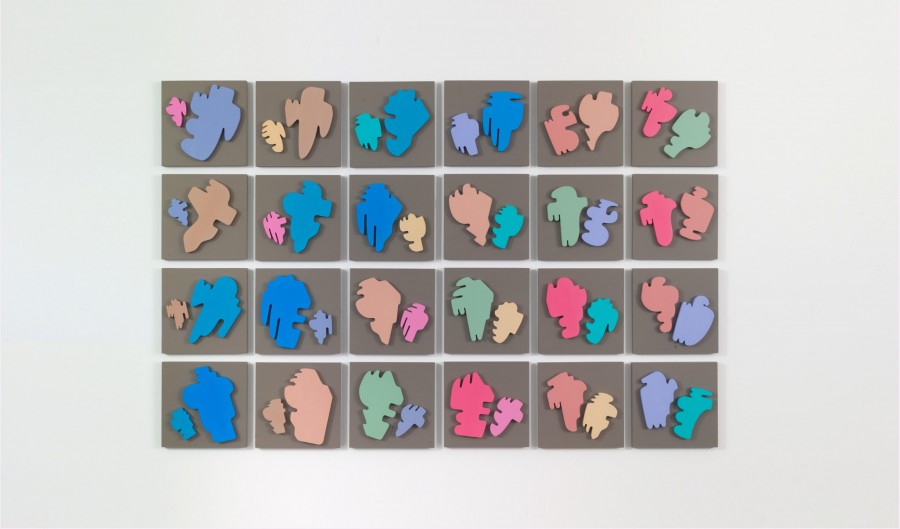