My Name is Inanna | Reading by Maryam Abdi

On view through Saturday, April 2nd

Join us for My Name is Inanna, a play by Ezzat Goushegir, the resident playwright of Chicago, performed by Maryam Abdi as part of the exhibition Reckless Law, Shameless Order: An Intimate Experience of Incarceration. There will be a Q & A after the show, moderated by Bob Jenkins.

Raw and brutal, My Name is Inanna is a passionate, lyrical story that blends myth and contemporary realities. The main character, named after Inanna, the Sumerian goddess of love, justice, and civilization, is a modern Middle Eastern woman poet and activist in search of identity and freedom. She flees the political tyranny of her home country after having been imprisoned for several years. After receiving political asylum in the U.S., land of democracy and social equality, she discovers unexpected limits to her freedom of speech as a second-class citizen. Marginalized as a pink-collar immigrant woman in the new society, she endures gender inequality, bigotry, and destitution. Seeking a new identity and justice she struggles to find her own place in the new society.

My Name is Inanna includes references to the following stories and historical events:

Inanna, the Goddess: “Inanna is the ancient Sumerian goddess of love, sensuality, fertility, procreation, and also of war.” Read more at: https://www.worldhistory.org/Inanna/

Medea, a play by Euripides: “Medea, an ancient Greek Tragedy, first produced in 431 BC, is centered on Medea’s calculated desire for revenge against her unfaithful husband.” Read more at: https://en.wikipedia.org/wiki/Medea_(play)

Du’a Khalil Aswad: “She was a 17-year-old Iraqi girl who was stoned to death in northern Iraq in 2007.” Read more at: https://en.wikipedia.org/wiki/Murder_of_Du%27a_Khalil_Aswad

Iran-Iraq War: “The Iran–Iraq War was a protracted armed conflict that began on 22 September 1980 with a full-scale invasion of Iran by neighboring Iraq.” Read more at: https://en.wikipedia.org/wiki/Iran%E2%80%93Iraq_War

Ezzat Goushegir (Playwright, she/her) received a BA in playwriting at the Faculty of Dramatic Arts in Iran and an MFA from the University of Iowa. She is a playwright, fiction writer and poet who has staged her plays internationally; published and received awards including those for Maryam’s Pregnancy and Behind the Curtain. Her plays have been translated into French, Arabic and Mandarin and produced by theater companies in the U.S., Europe, China and the Philippines. Among her many activities, she was a Fellow Writer in the Iowa City International Writing Program, a Writer-in-Residence at the University of Maryland, a co-director and dramaturg of a reading series at New Federal Theatre in New York. She has published several plays and short stories in English anthologies, and ten books in Persian including four volumes of her Memories in Diaspora this summer. In March 2011, she performed My Name is Inanna in Beijing China, where it had two productions at Trojan Theatre in November 2011 and The Penghao Theater in 2012. This play was selected for 9th international Women Playwrights Conference and was performed in August 2012 in Stockholm, Sweden. She currently teaches at DePaul University (SCPS) in Chicago.

Around the world, millions of people are held in prisons, jails, detention centers, camps, and other sites of confinement. In fact, thousands of carceral spaces permeate contemporary life. The economics, spatial planning, and logic of punishment shape our everyday lives, even if we have not had direct experience with police, courts, ICE agents, detention centers, jails, or prisons.

Through transnational dialogues facilitated by art and art-based workshops, formerly incarcerated artists engaged in intimate conversations and collaboratively collected created artifacts and objects desired during imprisonment or those that kept them connected to their outside life; created installations of banned smells, videos of pervasive surveillance, and they shared their experience of time and space with artworks that could be seen only in the mirror in another installation with embedded related soundscapes.  This collection along with artists’ individual artworks are displayed in this exhibition.

While different regimes and nation-states lock up people based on distinct ideas of safety and order , through a collaborative, art-based process these artists found common practices of punishment permeated through their experiences. Whether they were detained in the notorious Evin prison in Iran, in any of the horrendous prisons in Illinois, or in horrific island prisons located off Australian shores, the violence of the carceral spaces and practices could all but break their humanity and ability to care for others. As transnational research reveals the off-shoring of American practices of punishment and incarceration to nations around the globe, this exhibition shows how these practices and policies are felt by those who have experienced them. In this way, this exhibition uses sensory experiences to think through the ways that punishment is used to hold power over lives across time and nationalities.

Design, Execution, and Curation by University of Illinois Visiting Artist Nasrin Navab in collaboration with Sarah Ross and Pablo Mendoza.

Initiated by Faranak Miraftab, Professor of Urban and Regional Planning, inspired by the Transnational Dialogues for a Humane Urbanism collaborative project. 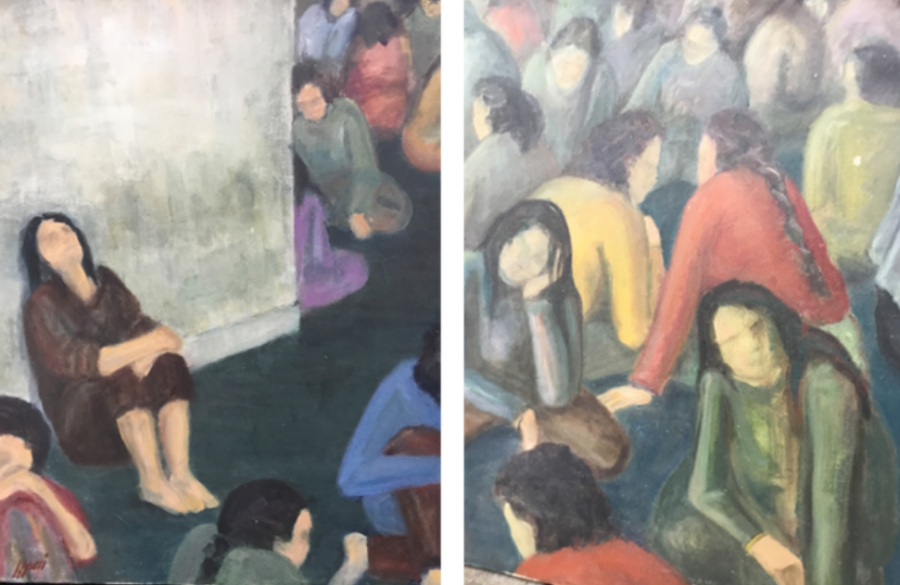