Sotomayor will appear in conversation with award-winning Chicago author and sociologist of education Dr. Eve L. Ewing. Sotomayor will discuss her life, writing, and inspiration behind her latest book, Just Help! In this story inspired by her own family’s desire to help others, Sonia Sotomayor takes young readers on a journey through a neighborhood where kids and adults, activists and bus drivers, friends and strangers all help one another to build a better world for themselves and their community.

Sotomayor will answer questions submitted in advance during a Q&A portion of the event. To submit questions for the event, please email to adultservices@chipublib.org and include your name and age. Questions from children are encouraged. All questions must be received by January 28 to be considered.

The Book Cellar is CPL’s bookstore partner for this event. If you would like to purchase a signed copy of the book, visit their website to buy signed copies of Just Help! / Solo Ayuda! or Sotomayor’s other books including Turning Pages, My Beloved World and Beloved World of Sonia Sotomayor.

Sonia Sotomayor was born in the Bronx, New York. She earned a BA from Princeton University and a JD from Yale Law School. She served as Assistant District Attorney in New York County, and then as a litigator at Pavia & Harcourt. In 1991, President George H. W. Bush nominated her to the US District Court, Southern District of New York. In 1997, President William Jefferson Clinton nominated her to the US Court of Appeals for the Second Circuit. President Barack Obama nominated her as an Associate Justice of the Supreme Court on May 26, 2009, and she assumed this role August 8, 2009, becoming the first Latina to ever hold such a high position. She is the author of Turning Pages, My Beloved World, The Beloved World of Sonia Sotomayor and Just Ask! 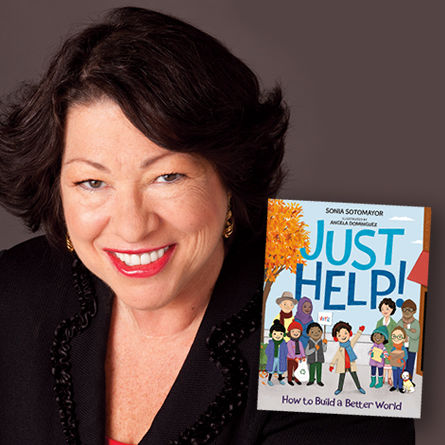