moniquemeloche is thrilled to present Slow Clap, Jake Troyli’s second solo show with the gallery and most expansive exhibition to date. Slow Clap presents a new series of paintings that marks the artist’s continued investigation in self-portraiture fusing classical iconography and humor to explore labor capitalism as a demonstration of value. The exhibition features two new large-scale, multi-figure paintings with their complexity and maximalist viewpoint akin to the classic Dutch painting, Garden of Earthly Delights. Rather than Bosch’s embellishment of lust and worldly fleshy indulgence, Troyli depicts a scenescape display of nude avatars fixed in a constant cycle of performance and labor. Compartmentalized into various scenes analogous to theatrical set design, the figures enact a variety of activities where the lines between celebration and violation are blurred.Troyli–who draws inspiration from his time playing division one basketball–contemplates the spectacle; criticizing the systems he both benefits from and is subjected to. Using classical Renaissance painting techniques, each work is built up starting with an underpainting to establish tones, followed by layers of bright color to achieve a graphic, cartoon-like quality. Troyli’s decision to leave the figures unrendered is deliberate, keeping the brown undertones visible as a means to express a generalization of race, marking the bodies as “other.” Through the repetition of symbolism present across this body of work, Troyli essentially subjects himself to repeated acts of surveillance, display, labor, and violence.

Mining imagery from the larger multi-figure works, Troyli generates a selection of paintings that dial into a particular sentiment. In addition to his familiar self-portraits that emphasize the artist’s visual response to the gaze, Troyli is expanding his repertoire to move beyond the frame, focusing on his elasticized avatar now at the hands of overly devotional, white characters that embody the voyeur. In The Crowd Surfer, these oversized hands simultaneously uplift and hold back the artist’s body, now headless, and in Superfan, the body is climbed or hugged on by a crying fanatic, a commentary on virtue signaling and competitive mourning around racial injustice. Duality is abundantly seen throughout the work, as the artist grapples with notions of uplifting/pulling down, empowerment/vulnerability and excitement/fear, underwriting the tension between the Black body as subject versus object.

Aptly titled Slow Clap, Troyli’s exhibition is a slow burn side show, where performers run toward a finish line that doesn’t exist, hover atop a seemingly impossible high dive, or are simply hung out to dry. Sentiments of sarcasm and disapproval underline the collective desire for these figures to fail in their valiant efforts to become individuals. Nudity becomes a tool for control, exposing physical attributes to assign value and acting as symbolism for feelings of vulnerability and performance anxiety. With the current saturation of Black figuration, Troyli subverts narratives surrounding Black exceptionalism and exploitation, providing his own fresh perspective through humor, and positions the viewers as audience in order to ask important questions around performance for spectators versus performance for self, and who the payoff is actually for. 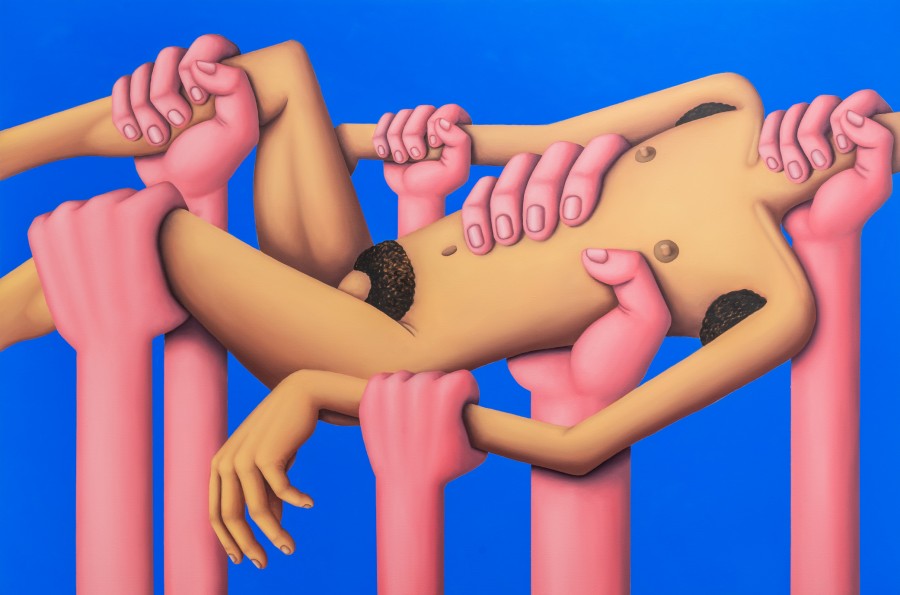