Elissa Osterland: Come Back As A Flower

Goldfinch is pleased to present “Come Back As A Flower,” an exhibition of new work by Elissa Osterland, and the artist’s first solo presentation.

Elissa Osterland’s practice takes many forms, from ceramics to performance, yet it remains rooted in an abiding interest in the hand and in a haptic understanding of time and memory. In her work, a ceramic vessel might become an instrument in performance, later becoming a photographic record of the performance, but nothing in Osterland’s practice exists as a sketch for something else; instead, it presents the possibility that things are never truly static.

In Come Back As A Flower, large and small-scale graphite drawings explore a mutability of both image and material, through a complex and hybrid process of image-transfer. Slipping between elements of photography, print-making, movement, and drawing itself, Osterland’s process embraces elements of chance and change, as she applies graphite powder to paper, through custom-made screens. Over multiple surfaces, through the transfer process, repeated images become both ghostly traces and expansive grounds, altered further by the artist’s own mark-making.

Celestial motifs, things in motion (bicycles and horses) and sources of light (suns and candles) are recurring images in the works, although they are often abstracted beyond immediate recognition. The imagery unfurls, spirals, and mutates from piece to piece, while the shifting values of light and darkness create a sense of dissonance between the forms and the surfaces on which they are rendered. In some moments, the graphite appears to hover above the paper; in others, the material has been worked vigorously into the surface of the work, as though applied with the force of the whole body.

For Osterland, the exhibition title has multiple resonances and associations, one of which is a song by the same name, featured on Stevie Wonder’s album “Journey Through the Secret Life of Plants” from 1979. Serving as a documentary soundtrack, the album is a strange and compelling experiment, over the course of which Wonder, along with other voices, sings to orchids, imagines the inner lives of seeds, and speaks from the perspective of plants. Sounds are layered and manipulated in an effort to capture an interconnectedness of living things, yet the album remains rooted in moments of familiarity and human tenderness. Osterland’s works speak to a similar desire for expansiveness, while meditating on the uncertainty of beginnings or endings. “Come back as a flower…but come back from where?” 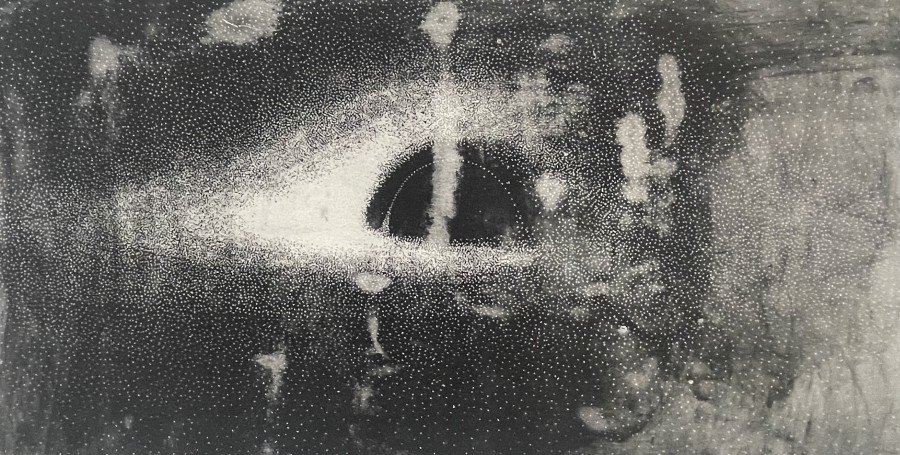