On view through Friday, February 25th

Chicago Artists Coalition is pleased to present Claimed, a solo exhibition of new work by BOLT artist-in-residence Selva Aparicio. The exhibition will be on view from February 25 – April 7, 2022, with an opening reception on Friday, February 25, 5-8pm.

Claimed is a solo exhibition by interdisciplinary artist Selva Aparicio that leverages themes of death, memory, and mourning to breathe new life into the forgotten. It exposes the inherent failings of a system that disproportionately relegates impoverished, disabled, and non-white Americans to anonymous, inaccessible mass graves like New York City’s Hart Island each year. Devoid of all traces of traditional ritual and remembrance, the pine casket, synonymous with pauper’s graves and potter’s fields, forms the heart of Aparicio’s installation. They are delicately covered with dandelion seeds, or achene, and elevated into the gallery wall in a manner reminiscent of European religious burials. The shrouded casket elegantly transcends the surface, meaning it becomes a shrine befitting of individual legacy and the reverent growth and potential of a life cut short by circumstance. No longer the mark of obscurity, it offers up a gentle requiem for the lost and provides the living with a touchstone to reclaim an infinite number of moments stolen away by the poverty, illness, and isolation–so rampant in western society and mitigates the unwavering indifference of systems designed to protect its most vulnerable. 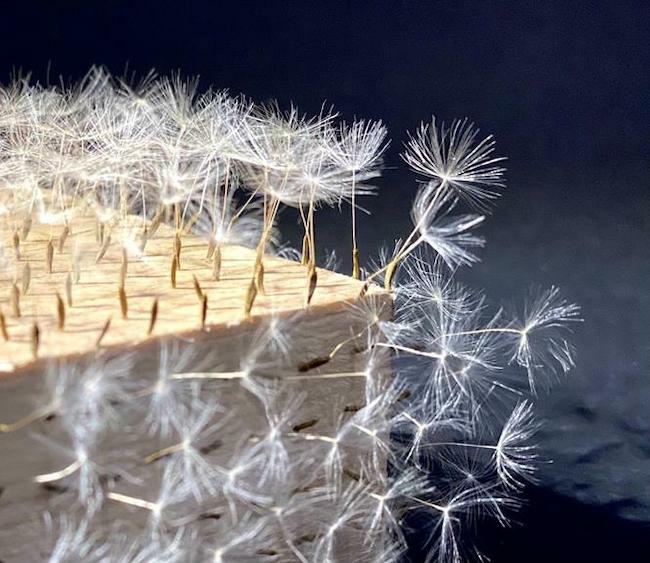