Taylor Harris: THIS BOY WE MADE

Join us for a virtual conversation on Women & Children First’s Crowdcast Channel celebrating the release of This Boy We Made: A Memoir of Motherhood, Genetics, and Facing the Unknown by Taylor Harris. For this event, Harris will be in conversation with Jessamine Chan.

A Black mother bumps up against the limits of everything she thought she believed—about science and medicine, about motherhood, and about her faith—in search of the truth about her son.

One morning, Tophs, Taylor Harris’s round-cheeked, lively twenty-two-month-old, wakes up listless, only lifting his head to gulp down water. She rushes Tophs to the doctor, ignoring the part of herself, trained by years of therapy for generalized anxiety disorder, that tries to whisper that she’s overreacting. But at the hospital, her maternal instincts are confirmed: something is wrong with her boy, and Taylor’s life will never be the same.

With every question the doctors answer about Tophs’s increasingly troubling symptoms, more arise, and Taylor dives into the search for a diagnosis. She spends countless hours trying to navigate health and education systems that can be hostile to Black mothers and children; at night she googles, prays, and interrogates her every action.

Some days, her sweet, charismatic boy seems just fine; others, he struggles to answer simple questions. A long-awaited appointment with a geneticist ultimately reveals nothing about what’s causing Tophs’s drops in blood sugar, his processing delays—but it does reveal something unexpected about Taylor’s own health. What if her son’s challenges have saved her life.

This Boy We Made is a stirring and radiantly written examination of the bond between mother and child, full of hard-won insights about fighting for and finding meaning when nothing goes as expected.

Taylor Harris is a writer, wife, and mom of three who lives in Charlottesville, Virginia. Her work has appeared in TIME, O Quarterly, The Washington Post, Longreads, The Cut, Romper, Parents, McSweeney’s, and other publications.

Jessamine Chan’s short stories have appeared in Tin House and Epoch. A former reviews editor at Publishers Weekly, she holds an MFA from Columbia University’s School of the Arts and a BA from Brown University. Her work has received support from the Elizabeth George Foundation, the Bread Loaf Writers’ Conference, the Wurlitzer Foundation, the Jentel Foundation, the Kimmel Harding Nelson Center, the Anderson Center, the Virginia Center for the Creative Arts, and the Ragdale Foundation. She lives in Chicago with her husband and daughter. 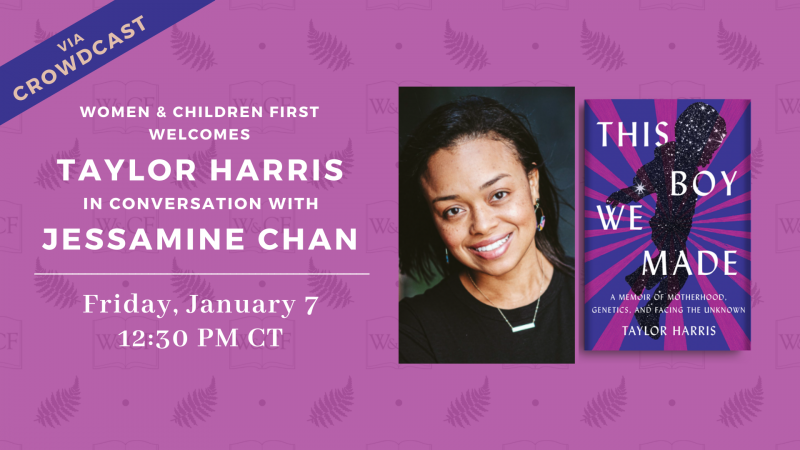