On view through Monday, January 24th

at the Chicago Cultural Center

Bubbe is proud to present a small retrospective of paintings by the late Sissy Bershad at the Chicago Cultural Center.

Drawing on her interests in the domestic, traces of the social and the small moments that fill our days and lives, the works in Party Pickins, are sunny and still. Addressing the paradox of painting as image and painting as object, the works are meant to live inside the spaces they present. A particularly striking painting of an exterior adobe wall finds its way into a neighboring canvas, an interior scene from the artist’s home.

For so many of us, the works of art that fill our lives are made by intimates. Their resonances are personal and their traces complex. Bubbe knows better than to start a sentence with “art is”, but will indulge ourselves with “art, as”. Art, as a container for ideas, a portal for memories, a reflection of our values and tastes, morphs endlessly with its contexts. Party Pickins is interested in shifting the private to the public.

An amateur in the amare sense, Sissy’s canvases reveal a love for play, color and space. Her idiosyncratic framing highlights her interest in the painting as object and the way in which its material presence would fill the homes of friends and loved ones. The creative act for Sissy was one of joyousness, of observation, of distillation and of socializing. Through commemorations of the sparkle amidst the quotidian, she hones our attention to life, stilled. The incidental moment — a glass of this in the light like that with a pear right there — sticks and stays long, even now.

Sissy Bershad (née Rebecca Blossom—later amended to Renee, and finally nicknamed Sissy by her older sister—Lemisch, thereafter Sissy Malmed, Sissy Fogelman; and finally Bershad; 1925-2003) was born to a tight-knit extended family in West Philadelphia, PA. An artist, designer, bon vivant, Sinatra superfan, consummate hostess, beloved friend, mother of two sons and one daughter, grandmother to four, and step-grandmother of six. As a single mother living in Philadelphia in the mid-60s, she owned the cherished gift shop from which this exhibition’s name is drawn, Party Pickins. A native of the “workshop of the world,” she also called Florida and Connecticut home before moving to Santa Fe, NM. She thrice survived cancer, the death of two husbands, and two divorces from a compulsive gambler, father of her last child. But Sissy’s infectious cheer and equanimity buoyed her and others and in addition to her whimsical arts and crafts, all self-taught, including painting (a practice she shared with her father), interior design, sewing and jewelry making. She extended this love through volunteering at the Museum of International Folk Art. Sissy’s last great act of courage was in not undergoing reconstructive surgery after a double mastectomy, but in fact posing, naked torso, for a photography exhibition shedding light on scars by Sharon Seligman. The last great love of her life was Matisse, a standard poodle with a taste for fine fabrics. This is her first solo exhibition in Chicago. (Betsy Fogelman Tighe)

Bubbe is an occasional project space and experiment in the aesthetics of the relational. Through considerations of the filial and familial, our program prizes thoughtful, feelingful and connective exhibition-making. Visit us online and on instagram 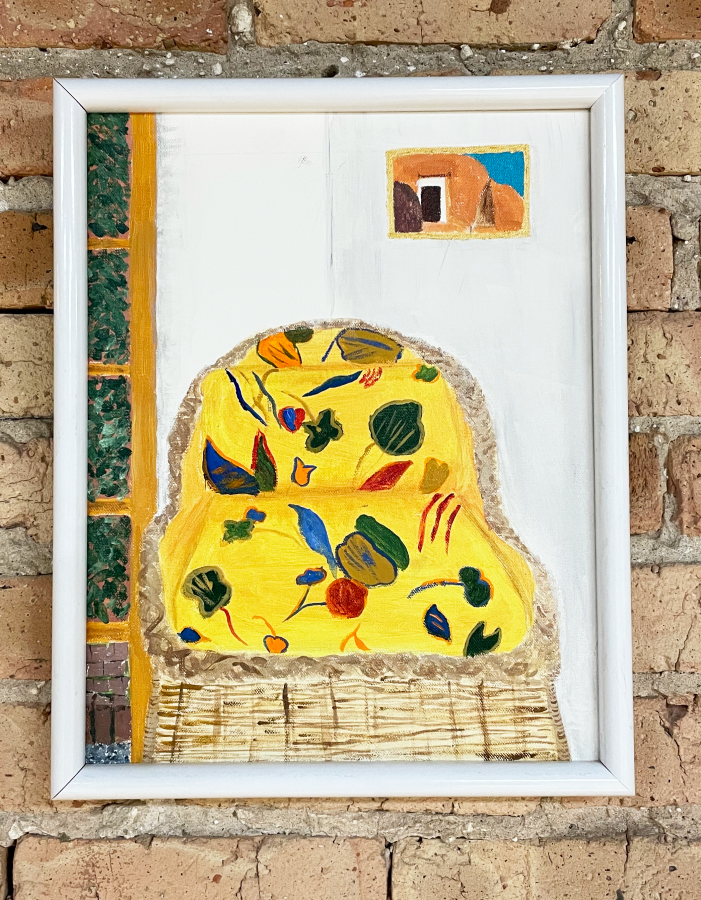