Pilsen Community Books is honored to partner with the Literatures of Annihilation, Exile & Resistance: An Interdisciplinary Approach to the Global Middle East, a research collective and event series co-sponsored by the College of Arts & Letters at Notre Dame University and the Kroc Institute for International Peace Studies for this event.Register in advance for this reading here.

Salwa Ismail is Professor of Politics with reference to the Middle East at the School of Oriental and African Studies, University of London. Her research examines everyday forms of government, urban governance, and governmental violence. She has conducted extensive fieldwork in both Egypt and Syria, enquiring into how mechanisms of government and practices of violence come to be formative of ordinary citizens’ political subjectivities. Her book Political Life in Cairo’s New Quarters: Encountering the Everyday State (University of Minnesota Press 2006) brings to focus regimes of discipline and control in everyday encounters between citizens and state agents and agencies in various urban spaces such as outdoor markets, streets and alleyways, security checkpoints, and municipality offices. Her recent book The Rule of Violence: Subjectivity, Memory and Government in Syria (Cambridge University Press 2018) asks how the Asad regime’s practices of violence, both in their routine and spectacular forms (e.g. the school, the prison camp), shaped Syrian political subjectivities, and what effect this violence has had at the level of society and the individual.

Roger Reeves’s poems have appeared in journals such as Poetry, Ploughshares, American Poetry Review, The Nation, Best American Poetry, and The New Yorker, among others. He was awarded a 2015 Whiting Award, two Pushcart Prizes, a Hodder Fellowship from Princeton University, a 2013 NEA Fellowship, and a Ruth Lilly Fellowship by the Poetry Foundation in 2008. He earned his Ph.D. from the University of Texas at Austin. His first book is King Me (Copper Canyon Press, 2013), which won the Larry Levis Reading Prize from Virginia Commonwealth University, the Zacharis Prize from Ploughshares, and the PEN/Oakland Josephine Miles Literary Award. His second book of poetry, Best Barbarian, is forthcoming from W.W. Norton in February of 2022.
Born in Istanbul to Iranian parents, Solmaz Sharif is the author of Look, finalist for the National Book Award. She holds degrees from U.C. Berkeley, where she studied and taught with June Jordan’s Poetry for the People, and New York University. Her work has appeared in Harper’s, The Paris Review, Poetry, The Kenyon Review, the New York Times, and others. Her work has been recognized with a “Discovery”/Boston Review Poetry Prize, Rona Jaffe Foundation Writers’ Award, and Holmes National Poetry Prize from Princeton University. She has received fellowships from the National Endowment for the Arts, Lannan Foundation, and Stanford University. She is currently an Assistant Professor in Creative Writing at Arizona State University where she is inaugurating a Poetry for the People program. Her second poetry collection, Customs, will be published by Graywolf Press in March 2022.
This conversation will be moderated by Azareen Van der Vliet Oloomi, Director of Creative Writing at the University of Notre Dame, and Ernesto Verdeja, Associate Professor of Political Science and Peace Studies.
Azareen Van der Vliet Oloomi is the author of Call Me Zebra, winner of the 2019 PEN/Faulkner Award, the John Gardner Fiction Award and longlisted for the PEN/Open Book Award. She is a National Book Foundation “5 Under 35” honoree and a Whiting Writers Award Winner. Her novel, Savage Tongues, is forthcoming in 2021. She is the Director of the MFA Creative Writing Program at Notre Dame and a Fellow of the Kroc Institute for International Peace Studies.

Ernesto Verdeja is Associate Professor of Political Science and Peace Studies at Notre Dame. His research focuses on the causes and prevention of genocide and mass atrocities, as well as on political reconciliation and transitional justice. Ernesto also frequently consults on mass atrocities prevention and early warning with governments and human rights organizations. 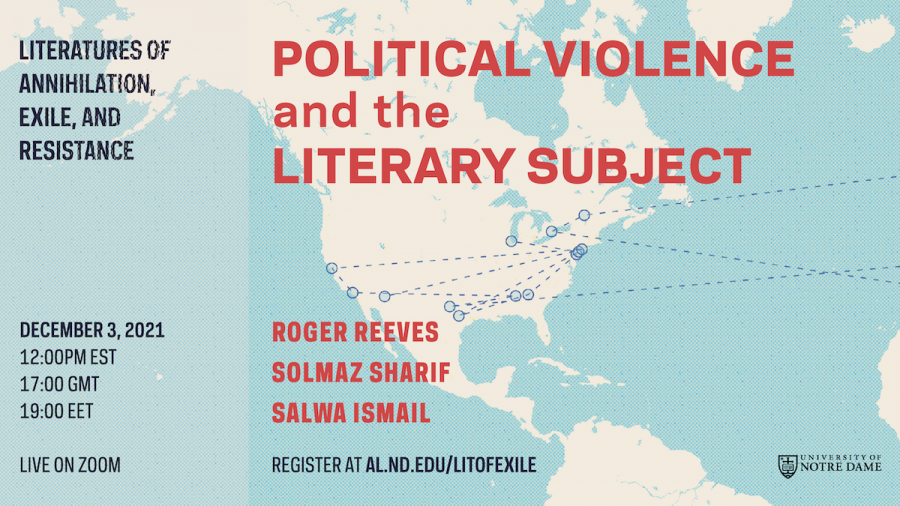