A Cunning Array of Stunts

On view through Sunday, January 2nd

A Cunning Array of Stunts is a two-channel video installation resulting from a performance collaboration with my mother and incorporating found footage from a 1970s television interview with my great-aunt, Midge Kovacs.

The work begins with a story about training to fall down and expands upon this theme of contradictory physical performances: athletic skill and the inutile slapstick body. Slapstick performance splits the performers imperfectly in two—a sentient entity driving the thingified object of their body—and, as opposed to sport, often “driver” and “thing” refuse to resolve seamlessly into one another. Through the capacity of slapstick to blur the body boundaries between individuals, the female protagonists, mother, daughter, aunt, rollick in their communal body, stunt double one another, and at the same time struggle to remain discrete.

Annelies Kamen, now based in Berlin, received her MFA from the School of the Art Institute of Chicago in 2014 and a combined BFA/BA in Art History from The School of the Museum of Fine Arts, Boston in 2011. In her work, Kamen engages with humor from a feminist perspective, playing in the power dynamic of joke-making. She is currently a Resident Artist at the Rijksakademie van beeldende kunst in Amsterdam. 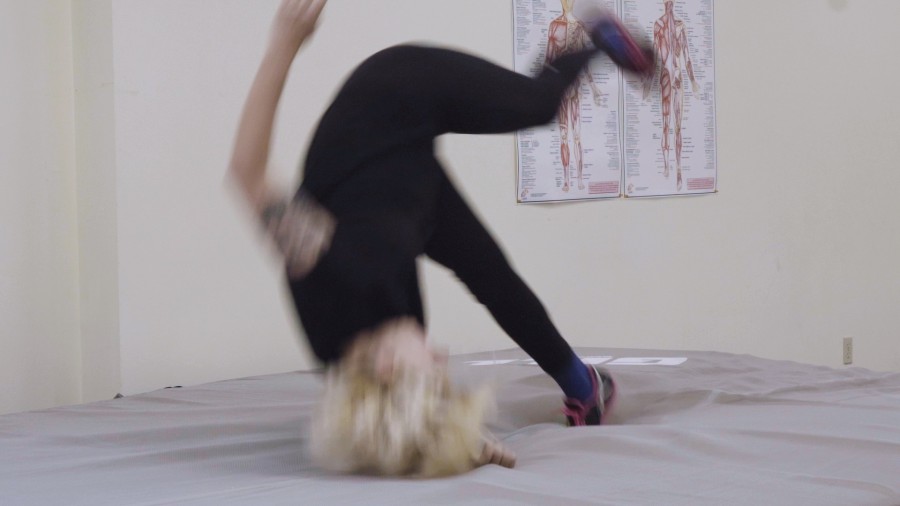