Join us for a public symposium on the photography of Hal Fischer, featuring an international panel of scholars responding to the artist about his body of work.

This public symposium organized by Tim Dean, James M. Benson Professor in English at the University of Illinois Urbana-Champaign.

Dean is the guest curator of Hal Fischer Photographs: Seriality, Sexuality, Semiotics at Krannert Art Museum. His research on human sexuality encompasses historical, cultural, philosophical, and psychoanalytic perspectives, with particular interest in what kinds of vocabularies are available, at different historical moments, for talking about sex.

Photographer Hal Fischer will be the respondent for this symposium. Over a career spanning four decades, Fischer has been an artist, art critic, and museum professional. His work has been presented in solo and group exhibitions and is featured in both public and private collections.

Brinkema’s research in film and media studies focuses on violence, affect, sexuality, aesthetics, and ethics in texts ranging from the horror film to gonzo pornography, from the body of films dubbed “New European Extremism” to the viral media forms of terrorism.

Senior Lecturer in History of Modern and Contemporary Art and Visual Culture, University of Exeter, UK

Florêncio is a cultural theorist of the body working on representations of sex, health, disease and Nature vis-à-vis biopolitics and the political, philosophical, and technoscientific history the dyad immunity/community.

Visiting Fellow, Yale Center for the Study of Race, Indigeneity, and Transational Migration

Head of Collections since 2018, Rehberg’s research involves questions of visual culture, for example contemporary queer photography and fanzines. He has published academic work mainly in the area of queer studies, media studies, and popular culture, for example on topics such as pornography or the Eurovision Song Contest.

Ricco is an art historian and queer theorist whose interdisciplinary research, teaching, and writing, draws connections between late 20-century and contemporary art and architecture; continental philosophy; and issues of gender and sexuality, bodies and pleasures, pornography and eroticism. He is widely recognized for his engagement with the work of French philosopher Jean-Luc Nancy.

Weissman holds an affiliated appointment in the Unit for Criticism and Interpretative Theory and teaches modern and contemporary art history, the history of photography, and the history of design. She is the author of The Realisms of Berenice Abbott: Documentary Photography and Political Action (University of California Press, 2011),  co-author (with Sharon Corwin and Jessica May) of American Modern: Documentary Photographs by Abbott, Evans, and Bourke-White (University of California Press, 2010), and co-author (with Erina Duganne and Heather Diack) of Photography: A Critical History (Bloombsury, 2020). 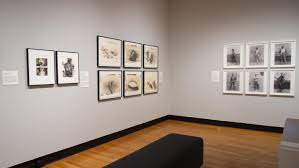