An “arpillera”, which means burlap in Spanish, is a brightly colored patchwork picture made predominantly by groups of women (also known as arpilleristas). The construction of arpilleras became popular in Chile during the military dictatorship (1973–90) of Augusto Pinochet.

The process of making La parte de atrás de la arpillera resembled that of making an audiovisual arpillera. Through the collection of personal histories—interviews (in-person and online), phone recordings and personal footage—filmed or sent by makers in Lo Hermida, La Patagonia, Los Andes, Coquimbo, La Serena, Malmö, Chicago and Toronto, we wanted to make a piece that contained the resistance of our ancestors and peers. The footage was initially gathered to be presented at the Textile Society of America’s Hidden Stories/Human Lives online on October 15, 16, and 17, 2020. By presenting embodied experiences of primary sources, we were trying to resist a colonial and ethnographic approach to research, move towards a culture of consent and combat the anonymity of Arpilleristas, whose names have been replaced by those of collectors and collections around the world.
Desierto de Memorias (Desert of Memories) is a collaborative research-based project that has collected the archives from the Memorial Sites of Augusto Pinochet’s dictatorship (concentration camps, mass graves, and detention + torture centres) and compiled them on a website. Between November 2020 and May 2021 we carried out three instances of work with each Group virtually and in person. Within these instances, we visited places where they found bodies of detainees who disappeared in the early 1990s, political detention centers used by State agents, memorials within the urban fabric of cities, and spaces that were used for the organization.

About the artists
Soledad Fátima Muñoz is a textile artist and cultural worker born in her family’s exile in Canada and raised in Rancagua, Chile. In her work, she explores the ever-changing social spaces we inhabit and the archival properties of cloth. Through the understanding of the woven structure as the continuation of our interconnected social gesture, her work seeks to fabricate embodied instances that participate in building a more equitable society. Her latest collaborative audiovisual project, “La Parte de Atras de la Arpillera” features a collection of interviews with Chilean textile workers whose experiences stitch together the country’s history of resistance. Soledad has received the City of Vancouver Mayor’s Arts Award for Emerging Artist, The School of the Art Institute of Chicago New Artist Society Full Merit Scholarship, the Emily Carr University of Art + Design President’s Media Award and most recently, the Textile Society of America Student and New Professionals Award.

Bélgica Castro Fuentes started embroidering arpilleras in Santiago, Chile, in 1978 and was part of The Arpillera Workshop of The Association of Families of the Detained-Disappeared. She was invited to join this group because of her ongoing search for her husband, who was detained and disappeared forever by the military dictatorship of Augusto Pinochet on October 6, 1973. The group got together once a week to talk, embroider, and remember their loved ones who had disappeared. They made visual stories through fabrics and threads, leaving a testimony of what was happening, making their tragedy visible, and denouncing the atrocities that the civil-military dictatorship committed. The Vicariate of Solidarity would then sell these works abroad. Castro was then exiled to Sweden, where she has been living since 1986 and has developed an incredible body of work in the two cities where she has lived these last years, first Vaxjo and then in 2005 she moved to Malmö.

About the workshop
On November 14th from 2-4pm, Soledad Fátima Muñoz will lead a workshop on arpillera creation and history, along with master Arpillerista Belgica Castro (via Zoom). This is a free workshop open to all. Materials will be provided, although you are encouraged to bring any scrap fabric material that you would like to include in your arpillera. The workshop will be held at Comfort Station in Logan Square (2579 N Milwaukee Ave, Chicago, IL 60647) see map below. Proof of vaccination will be required to enter, and masks will be worn at all times. 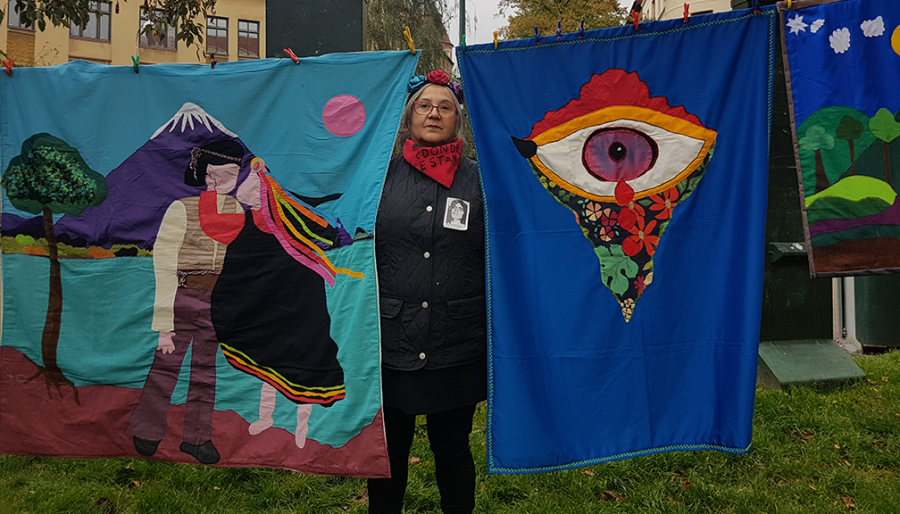