Chicago and Civil Rights in the 1960s

This program will be held virtually on Zoom. Please register for free in advance here.

“I have seen many demonstrations in the south, but I have never seen anything so hostile and so hateful as I’ve seen here today.” Martin Luther King Jr. said these words in Chicago.

In January 1966, King launched the Chicago Freedom Movement, his dramatic attempt to bring the moral weight of his activism to the segregation and discrimination that plagued the urban north.

“We’re going to create a new city,” he promised in the campaign’s first days. Instead, he came up against an old city determined to protect its color lines. At the movement’s defining march in August 1966, white Chicagoans battered protesters with bottles, bricks, and cherry bombs, and Dr. King was struck by a rock.

King’s Chicago campaign occurred at the middle of a tumultuous decade shaped by competing visions of American society.

In this installment of “Conversations at the Newberry,” Kevin Boyle and Clayborne Carson, two historians who have studied the civil rights movement, the United States during the 1960s, and the life of Dr. King, will discuss the troubling history of this era and reflect on its continuing impact over the past half century.

“Conversations at the Newberry” is generously sponsored by Sue and Melvin Gray.

Your generosity is vital in keeping the library’s programs, exhibitions, and reading rooms free and accessible to everyone. Make a donation today. 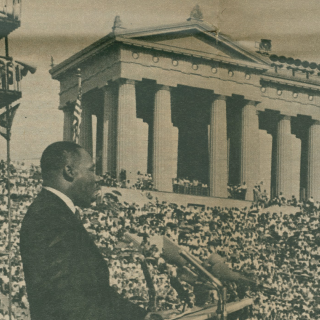