On view through Sunday, December 12th

Friday, October 8 at 5:00 p.m.
Gallery walk with artist T.J. Dedeaux-Norris at University Galleries. Meet the artist and hear about Part II of their two-part exhibition. Free and no reservations needed. Masks are reequired.

University Galleries of Illinois State University is pleased to present T.J. Dedeaux-Norris: Second Line from August 4 through December 12, 2021. Split into two parts, this exhibition features over 45 works from multiple series spanning sixteen years by artist, performer, and educator T.J. Dedeaux-Norris. Dedeaux-Norris critiques systems of race, sex, gender, religion, education, healthcare, and class, as well as the complexities of family dynamics and histories. Through their multidisciplinary practice, including painting, fiber, performance, video, and music, Dedeaux-Norris questions how these systems—and the visible and invisible trauma they induce—exploit people of color, women, Queer folx, and the elderly.

The exhibition title refers to New Orleans’s history of funerary celebrations and parades, Dedeaux-Norris’s Mississippi Gulf Coast family, and the jazz funeral for victims of Hurricane Katrina. As author Richard Brent Turner points out in Jazz Religion, the Second Line, and Black New Orleans: After Hurricane Katrina, second lining and jazz funerals are tied to Haitian and West and Central African diasporic religious practices and music traditions. In short, jazz funerals include marching and dancing from the church or funeral parlor to the cemetery alongside family and friends to the music of brass and percussion bands, which is referred to as “first line” or “main line.” Following is the “second line,” which welcomes members of the community and passersby who join in the rhythms of life and death. These traditions, both secular and sacred, have grown independently over generations leading to second line parades for leisure purposes and festivals.

Through their practice, Dedeaux-Norris has reinvented their identity several times, living and making art as Tameka Jenean Norris, Meka Jean, and presently T.J. Dedeaux-Norris—an abbreviation of their assigned name and addition of their mother’s French-Creole maiden name. Each identity will be featured in the exhibition, although not chronologically. Part I of the exhibition indicates the main line and is absent of figures other than a back-lit self-portrait of Tameka and a recent video of T.J. laying that former persona to rest. Collaged fabric paintings from the series Post-Katrina and an installation dedicated to their mother explore Dedeaux-Norris’s grief from not being physically present for their family during the devasting 2005 hurricane. Years later, Dedeaux-Norris became their mother’s primary caretaker—a responsibility that included the role of power of attorney while navigating: a relocation to the Midwest, estate management, and the healthcare system.

Mourning takes on different connotations in Part II of the exhibition as themes of second lining become present. Figures appear in nearly every piece—the joining in celebration of many. Portraits of family members from the series Cut From the Same Cloth highlight the subject’s domestic life; these were created with the intention of reconciling family disconnection after leaving the Gulf Coast to pursue a rap career and their education. Dedeaux-Norris shared with Ronchini Gallery, that, “painting these portraits was a way to reconnect with relatives I had become estranged from.” More recently, Dedeaux-Norris has been exploring what they call “embodied research” as a way to heal their body from fatigue, disease, generational trauma, and immense grief after the passing of their grandmother. Focused on centering their mind and body, this research includes acupuncture, massages, boxing, chiropractic alignments, and spiritual practices. By(e), Tameka, a 70-minute video premiering in this exhibition, contains recordings from their life over the past nine years, including this process of building physical endurance and strength.

The second rotation of the exhibition will take place during regular gallery hours and will be open to the public. Onsite and virtual curator-led tours are available throughout the exhibition; a video tour will be announced online; and a series of art-making lesson videos created by Tanya Scott, University Galleries’ curator of education, and University Galleries’ student assistants, will be released on the exhibition website. A virtual art-making activity inspired by Dedeaux-Norris’s work will take place in early December in conjunction with World AIDS Day and Day With(out) Art. 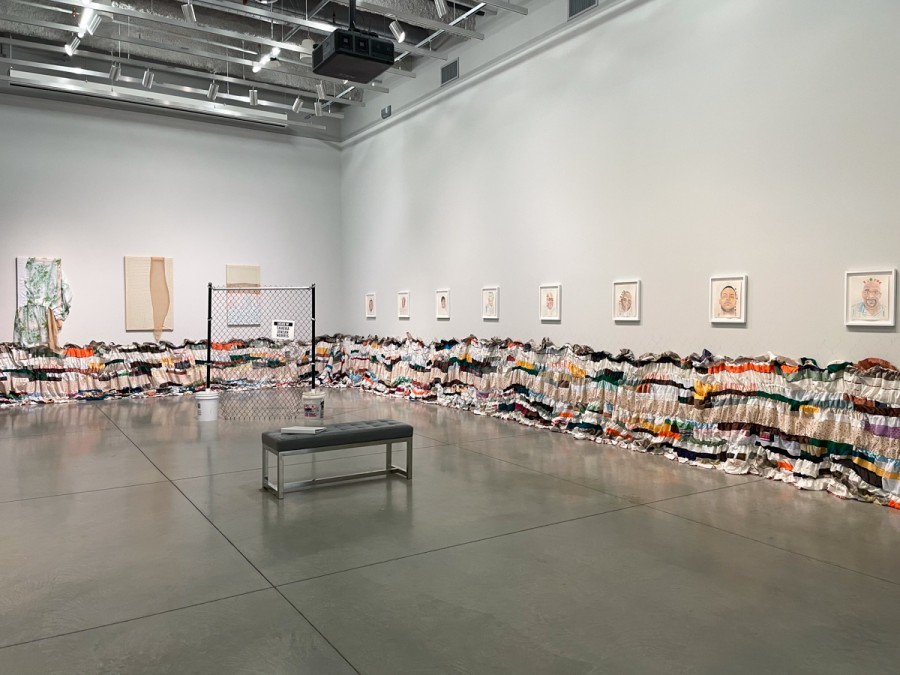