Julius Caesar is delighted to announces Impending Moreness, a solo exhibition of new work by Kari Cholnoky on view from October 29th to December 19th.

Cholnoky’s work mingles many references: the geologic record of human existence as a compacted trash layer, the onslaught of the chaotic present, the brain-dead state of the limitless scroll, the body’s role as weapon and meat popsicle, and the artist’s own interest in rendering hyperobjects. Part dopamine rush, part petrification, Impending Moreness explains a state of free fall. In such a state, one’s ability to distinguish one’s self from the mass of physical and digital object waste becomes impossible. Cholnoky’s hyperobjects depict the chaos of our collision and mutation, presenting a glimpse of a reality shaped by compulsive piles.

Kari Cholnoky holds an MFA in painting from Cranbrook, and a BA from Dartmouth College. Recent solo exhibitions include Impending Moreness at Julius Caesar Gallery, Chicago, IL, and Motherboard at Real Pain, Los Angeles, CA. Recent group exhibitions include Theorem X/Y at Rachel Uffner Gallery/Mrs. Gallery, Cult of the Crimson Queen at Ceysson & Benetiere, New York, NY and Wirrwarr at Anton Kern Gallery. Cholnoky attended the Worth Advisory Bovina Artist Residency in the summer of 2019, and the Fountainhead Residency in Miami, FL in 2017. Cholnoky has been featured in Maake Magazine, Editorial Magazine, Hyperallergic, and as part of the Habitat series on ArtNews. The artist lives and works in Brooklyn, NY. 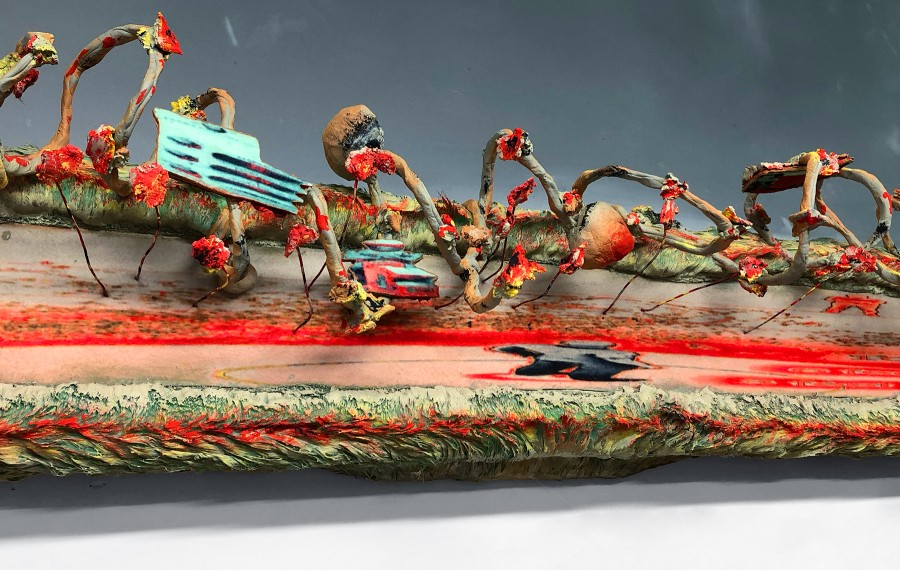