On view through Sunday, November 7th

The Ukrainian Institute of Modern Art is pleased to announce Kandinsky: The Rediscovered Bauhaus Sketchbook, an exhibition featuring 15 pages of a newly

authenticated sketchbook used by the artist Wassily Kandinsky in 1922, when he was teaching at the Bauhaus in Weimar, Germany. On view from October 16 through November 7, 2021, the exhibition will make available to the public the only loose pages from the 43-page sketchbook possible, without damage to the sketchbook itself. Kandinsky: The Rediscovered Bauhaus Sketchbook is presented in partnership with the National Museum “Kyiv Art Gallery” in Kyiv, Ukraine and is made possible through the generosity of the Khodorkovsky Family, the sketchbook’s owner.

Wassily Kandinsky (Moscow, 1866 – Neuilly-sur-Seine, France, 1944) is one of the most noted artists of the 20th century. An artist, art theorist and educator, he is often credited as a pioneer of abstraction. Kandinsky spent his youth in Odessa, Ukraine, graduating from the Grekov Odessa Art School. He then attended the University of Moscow, where he studied law and economics, from 1886-1892. He declined a teaching position in his field in Dorpat, today Tartu, Estonia in 1896 and moved to Munich to study art, first with Anton Azbe, followed by Franz von Stuck. While in Munich, Kandinsky began to move towards abstraction. He is widely known for his work with German artist Franz Marc (1880-1916) for the publication of the Blue Rider Almanach and its related exhibitions. His 1911 treatise Concerning the Spiritual in Art continues to be an important resource explaining the inner life of the artist and its relationship to non-objective forms. His forced return to Russia at the onset of World War I in 1914 was short-lived. He returned to Germany after the war and assumed a teaching position with the Bauhaus, where he remained until its closure by the Nazi government in 1933. Kandinsky then left for France, where he remained until his death.

The sketchbook’s rediscovery corrects previous issues concerning the absence of known personal sketchbooks by the artist from 1922-1927. Provenance history suggests the existence of additional sketchbooks, as yet to be found.

For further inquiries, a book (hardback) documenting the authentication process will be available for purchase for $35 with an introduction by Nuno Viana. In addition to reproductions of all the sketches themselves, expert reports by Lisa Florman, Reinhold Heller, Dmytro Horbachev, and Maria Valyaeva, are reprinted. A technical examination and analysis report from the Conservation Department at the Metropolitan Museum of Art (NYC.) is also included. 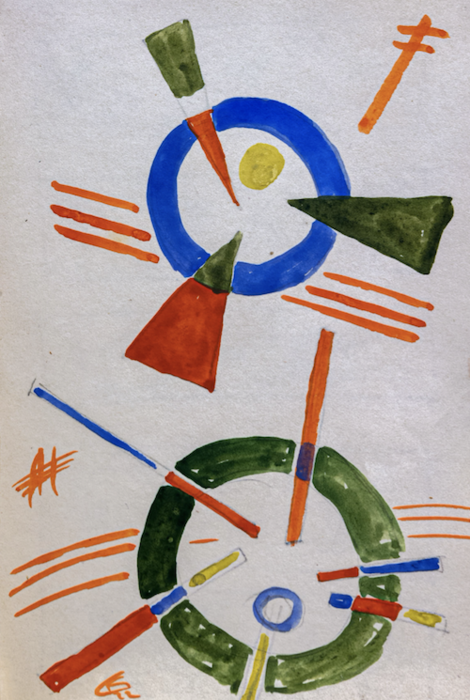