Opening Saturday, October 9th, at 8AM

On view through Thursday, October 14th

Final weekend to visit Tangled Up in Blue, Gina Lee Robbins’ installation in response to fatal encounters with law enforcement in Cook County for 22 years.

From the artist’s statement: When I got the news of 13 year-old Adam Toledo’s murder in Chicago last March, it went through me like an arrow. In the photo that circulated all over the news and social media, I saw in his contagious smile the 10- and 11-year-olds that I’ve gotten to know as a teaching artist, and the many soccer teammates and classmates my sons have had over the years. I saw a child.

I wanted to understand how it is that interactions with law enforcement can have such lethal results. I discovered a citizen-run organization that has been collecting media reports of any encounter with law enforcement that resulted in a fatality for over 20 years. These include instances when an officer has used deadly force, when an officer has used less than deadly force, when a person has been fatally struck in a vehicular pursuit, or when an individual has taken their own life, among other cases. I looked closely at the data for Cook County, Illinois and was struck by the volume of cases, by how many stories and names I recognized, and by how many I had never heard before.

Encounters is the result of my journey through this data. I read every reported story of a life lost in the presence of law enforcement between the dates January 1, 2000 and April 30, 2021 in Cook County. As I read each story, I rolled a small wad of porcelain clay in my hands. When I finished I said the deceased’s name aloud, and made a fist, squeezing the clay in my palm. I repeated this process for all 624 individuals whose stories were reported.

Before firing the porcelain, I rubbed cobalt carbonate into my hands and loosely touched these forms, leaving random remnants of blue on their surfaces after firing. I strung them together with steel wire, by year.

Relics is my exploration of what might have been left behind following some of these instances, I collected 13 items that were significant to the stories reported: a box cutter, fork, pellet gun, spent firecrackers, cardboard sign, beach ball, knife, automobile debris, pizza box, dust mop, screwdriver, stroller wheel and sleeping bag. I shrouded each element individually, using cotton sheets and burlap that I had hand-dyed and torn. I then bound them with yarn and military thread in various shades of blue, working reclaimed 9mm bullet casings into those whose stories involved the use of deadly force. 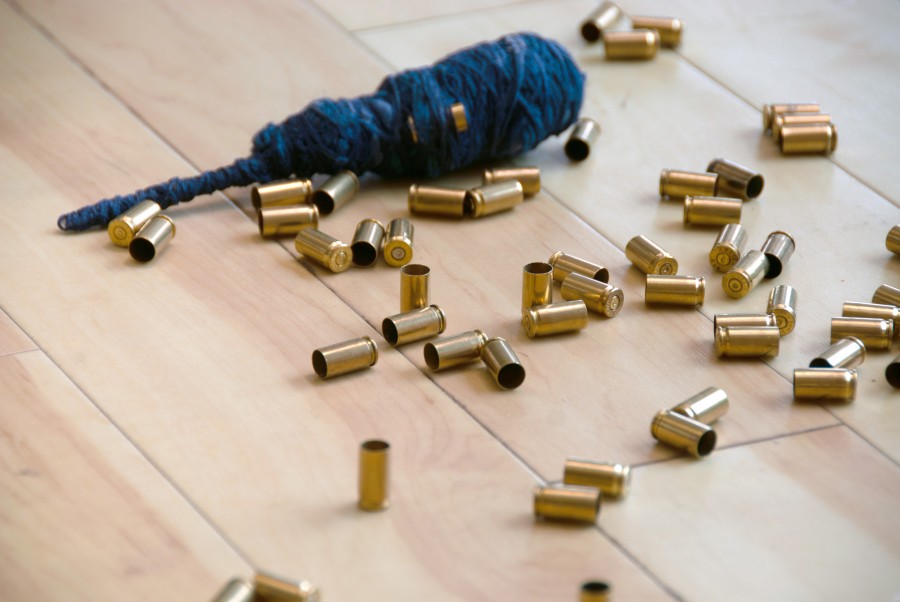