The Lannan Cultural Freedom Prize for 2020 was awarded to Angela Y. Davis for her lifetime achievements as a public intellectual advocating for racial, gender, and economic justice; to Mike Davis for his life’s work as a public intellectual who encourages critical analysis of society in the service of constructing an alternative, post-capitalist future in both theory and practice; and Ruth Wilson Gilmore for a lifetime of achievement as a public intellectual working toward the decarceration of California, the United States, and the world. Join all three, along with acclaimed author Keeanga-Yamahtta Taylor for an urgent conversation on abolition, cultural freedom, and liberation.

***Register through Eventbrite to receive a link to the video conference the day before the event. This event will also be recorded. Live captioning will be available via the webcast.***

Mike Davis, professor emeritus of creative writing at UC Riverside, joined the San Diego chapter of the Congress of Racial Equality in 1962 at age 16 and the struggle for racial and social equality has remained the lodestar of his life. His City of Quartz: Excavating the Future in Los Angeles challenged reigning celebrations of the city from the perspectives of its lost radical past and insurrectionary future. His wide-ranging work has married science, archival research, personal experience, and creative writing with razor-sharp critiques of empires and ruling classes. He embodies the Lannan vision of working at the intersection of art and social justice. Davis has also helped to develop the theory of the prison industrial complex.

Angela Y. Davis is Distinguished Professor Emerita in the History of Consciousness and Feminist Studies Departments at the University of California, Santa Cruz. Dr. Davis grew up in Birmingham, Alabama, and has been an activist and Marxist-Feminist in the Black Power and abolitionist movements since the late 1960s. In the 1980s, her book Women, Race and Class helped to establish the concept of intersectionality. She also helped to develop the concept of prison abolition, especially in her books Are Prisons Obsolete? and Abolition Democracy: Beyond Prisons, Torture, and Empire. Recently, Dr. Davis has written about the international movement in solidarity with Palestine in Freedom Is a Constant Struggle: Ferguson, Palestine, and the Foundations of a Movement. Her work helped to lay the theoretical groundwork for the #DefundthePolice movement. Davis’s memoir will soon be published in a new edition by Haymarket Books.

Keeanga-Yamahtta Taylor writes and speaks on Black politics, social movements, and racial inequality in the United States. She is author of From #BlackLivesMatter to Black Liberation (a Lannan Cultural Freedom Especially Notable Book Award recipient, recently published in an updated edition by Haymarket Books) and editor of How We Get Free: Black Feminism and the Combahee River Collective. Her third book, Race for Profit: How Banks and the Real Estate Industry Undermined Black Homeownership, published in 2019 by University of North Carolina Press, was a finalist for a National Book Award for nonfiction, and a finalist for the Pulitzer Prize for History. She is a contributing writer at The New Yorker and professor at Princeton University.

This event is a partnership between Lannan Foundation and Haymarket Books.

Lannan Foundation’s Readings & Conversations series features inspired writers of fiction, nonfiction, and poetry, as well as cultural freedom advocates with a social, political, and environmental justice focus. We are excited to offer these programs online to a global audience. Video and audio recordings of all events are available at lannan.org.

Haymarket Books is a radical, independent, nonprofit book publisher based in Chicago. Our mission is to publish books that contribute to struggles for social and economic justice. We strive to make our books a vibrant and organic part of social movements and the education and development of a critical, engaged, international left. 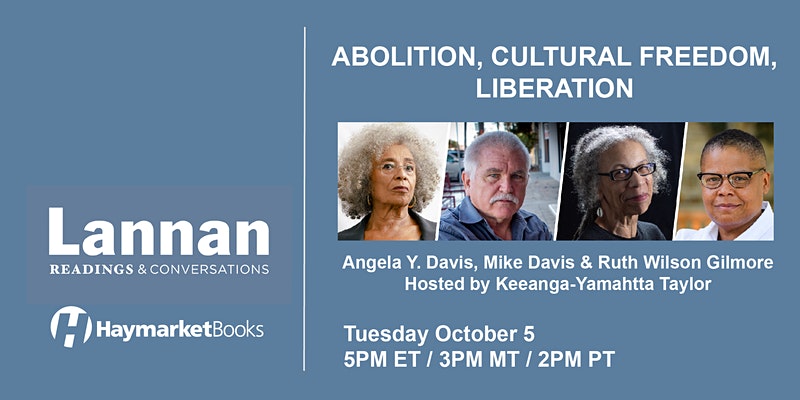