On view through Wednesday, November 24th

William S. Schwartz: Color and Coloratura will be on view September 20 through November 24, 2021. In response to recent changes in city and state COVID-19 guidelines, we’re offering exclusive tours for small groups (20 people or fewer) both during and outside our regular business hours. If you’re interested in scheduling a tour for yourself, please reach out to info@madrongallery.com. You can also schedule individual appointments by clicking the “Schedule Gallery Visit” button on our homepage, or by contacting the gallery at (312) 640-1302 / info@madrongallery.com.

On October 26th, Glencoe Public Library will be hosting a virtual author talk where we’ll be discussing William S. Schwartz: Color and Coloratura the book. Reservations may be made here. The book can be purchased at our online store or in person at the gallery.

William S. Schwartz: Color and Coloratura the book and exhibition represent theculmination of over ten years of research and collecting by Madron Gallery. The exhibition comprises artworks for sale and on loan from several private collections and organizations. Schwartz’s body of work spanned over five decades and often defied easy categorization. An opera-singing Jewish immigrant from Russia, William S. Schwartz became a linchpin in Chicago’s twentieth-century modern art scene. He arrived in the United States around 1912, fleeing the violence under the Pale of Settlement, and was mentored by Karl A. Buehr at the School of the Art Institute of Chicago. Schwartz forged a path blending and shifting between such disparate artistic modes as Fauvism, Futurism, and Surrealism as he built a prolific career from the tumultuous period just after WWI all the way through the early 1970s.

Known for his vibrant, saturated canvases and formal innovations in abstraction—particularly his synesthetic Symphonic Forms—Schwartz was dubbed “a musician in color” by his critics. He was a founding member of Around the Palette, a collective of Jewish artists, where he helped shape Chicago’s cultural conversation alongside heavyweights like Todros Geller, Anthony Angarola, and Aaron Bohrod. Schwartz was awarded numerous prizes by the Art Institute of Chicago and held his first one-man show there in 1935; he also exhibited nationally at places like The Metropolitan Museum of Art and The Pennsylvania Academy of Fine Arts.

Conversation surrounding early twentieth-century Midwestern art tends to be dominated by the Regionalist Triumvirate. As Schwartz was active in the same period, his name tends to be overshadowed, obscuring his significant influence in moving the needle of artistic progress in the Second City both within the Regionalist movement and beyond. Madron aims to preserve and celebrate the legacy of an artist who immortalized Chicago and its surroundings with his indelible style.

Madron Gallery’s extensive inventory of paintings, drawings, and prints showcases the breadth and depth of art in the United States between 1890 and 1940, especially Chicago and Jewish artists. Through curated exhibitions, publications, and community collaboration, Madron Gallery is dedicated to supporting the work of under-appreciated American artists, connecting the themes, values, and subjects represented in the collection to artwork being created today. 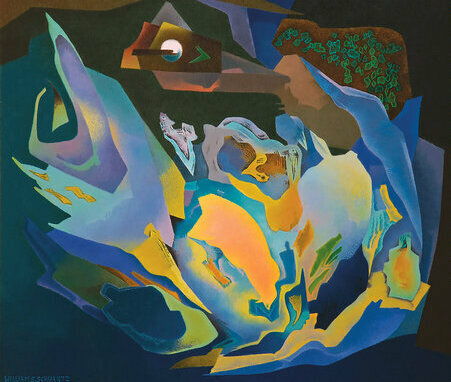